Dark Harvest is a 1992 shot-on-video horror film from writer/director James I. Nicholson. The film was shot on location in the deserts of California. I’m not certain if the film is also set there, but I assure you, that shit is not important.

A planned week-long horseback riding trip turns into a slow-paced, yet nightmarish fight for survival against a gang of murderous scarecrows when a group of tourists and their guide find themselves stranded in the middle of the desert after their tour van breaks down. Yes, I said “tour van“.

The group consists of a newly engaged young couple, an older married couple, three college girls, and a woman named “Jude”, who is clearly questioning her vacation destination choice. Jude is also the most vocal about not wanting to take the shortcut that the cliched “redneck mechanic working at a garage in the middle of nowhere” warns them not to take. Both the warning and her apprehension prove to be meaningless as they break down well short of reaching the shortcut.

Stuck in the depths of the desert with little chance of another vehicle passing by, the tour guide suggests that they walk to their destination… which is approximately an 8 hour trek. As expected, most of the campers are far from thrilled about the idea, but consent as there is not much of an option. Jude is further displeased.

After walking for some distance, the tour guide notices a house in the distance. This seems odd as there are no roads leading to it, nor any towns or store in the vicinity. Needing a place to rest and regroup, they head for its shelter. Most of the group enter the main building, seeking shade and a chance to rest their bones. The married couple, however, instead find a small shed in which to screw. The act is interrupted by screams from within the house.

A man brandishing a shotgun has entered the building, demanding answers for why there are intruders. He discloses that the house once belonged to his family, all of whom mysteriously died or wisely moved. He tells them that the property was once covered in wheat fields, which explains the presence of the scarecrows, but that the fields also died out in mysterious fashion. The man warns them to leave, preferably by sundown, before departing himself. 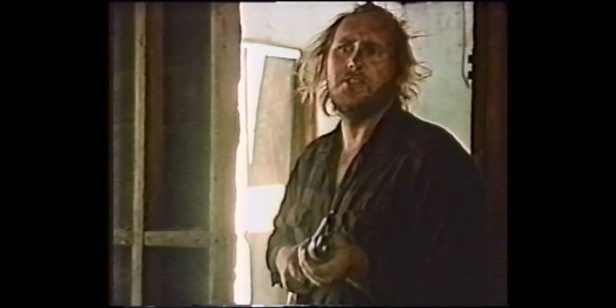 The group continue their hike, but are soon distracted by the sight of a person standing in a clearing ahead. They hastily approach the figure, hoping for assistance, only to discover that it is just one of the aforementioned scarecrows. Disheartened, they continue their march, soon finding another scarecrow. Some in the group believe it to be the same scarecrow, leading them to fear that they’ve been walking in circles. With no desire to continue the trip in the dead of night, they decide to set up camp… RIGHT IN FRONT OF THE FUCKING SCARECROW! Yeah, you guys deserve to die.

Jude and one of the college girls are the only ones bright enough to realize that this is an insanely stupid idea and revolt, choosing to take their chances walking back towards where they believe the van was parked. The tour guide, Alex, gives them the flare gun to use it to signal for help.

Soon after, Alex entertains the remaining tourists with a spooky campfire tale. While the story does little more than help establish dread, it might be more fleshed out than the film’s actual plot. The story wraps and one of the girls attempts to continue conversation by having all the others reveal their personal fantasies. However, all this does is make things much more uncomfortable and awkward for all parties when the “married” woman reveals that she’s actually the man’s mistress… and she’s desperately seeking a “promotion”.

The group finally calls it a night and settles down to rest. However, as they prepare to do so, they notice that the scarecrow has disappeared from its post. The campers are understandably unnerved by the disappearance, but not enough so to find a new place to sleep for the night. In spite of the new threat of danger, the night passes with no further incident. 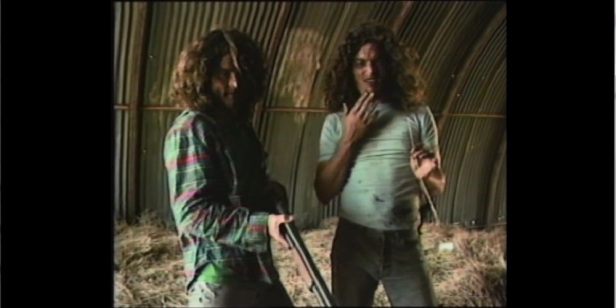 Morning arrives to find that Jude and the college girl have spent the night inside of a small barn-like structure. They are awakened by a pair of deranged twin brothers, who look quite a bit like Curt and Cris Kirkwood of The Meat Puppets. The brothers hold the women at gunpoint and demand “payment” for the girl’s having stayed in their building. When asked to remove their clothing as part of the “payment”, the women fight back, ending in death for 3 of the 4 characters. While an intriguing subplot, its not explored any further and, as such, feels notably out of place with the remainder of the film.

The scarecrows return at sunset (which would appear to occur only mere minutes after they wake for the day) to cause more mayhem and slowly kill off the majority of the cast. As might be expected in similar situations, tensions begin to rise along with the body count. While this does help progress character development, it also significantly slows down the film, making the “home stretch” feel more like a marathon.

Despite a miniscule budget and a rather thin plot, Dark Harvest still manages to provide some entertainment and, overall, is far from what I would call an “awful” film. Sure, the film may be fairly anemic in the gore department. And yes, some of the performances border on cringeworthy. Yet, all the “pieces” are still there. Well, except for maybe a boom mic. Seriously, the audio sucks ass on this film!

Are there creepy scarecrows? Is it set primarily at night in an isolated setting? Does it feature a high kill count? Gratuitous nudity? Check, check, check, check, and more than you might expect! Clear dialog? Nah. Fuck that shit!

Yes, folks! Dark Harvest looks, feels, and plays out just like a whole Hell of a lot of other numerous horror films from the 80s and 90s!

And that’s the problem!

Dark Harvest looks, feels, and plays out a whole Hell of a lot like numerous other horror films from the 80’s and 90s!

Ultimately, there’s nothing truly defining or stand-out about Dark Harvest. While being a respectable shot-on-video production with little budget, the film is unfortunately quite forgettable. That’s not to say that it’s not worth watching, but if you are wanting to watch a quality movie about killer scarecrows, you’d probably be better served watching 1988’s Scarecrows (review link). That film, while also made on a relatively small budget (albeit, one presumably much larger than what Dark Harvest had) is vastly superior in all aspects.

Dark Harvest was released to DVD by Intervision Picture Corp. back in 2017 as part of a double feature alongside the film Escapes, which features Vincent Price. Maybe check this one out if you stumble upon it, but don’t go out of your way looking for it. I surely wouldn’t wander the desert for it.