If there is one thing that I try not to do at Horror And Sons, it’s pretend that I am some sort of “expert” on the horror genre. I am not. Not even remotely close. I consider myself a “student” on the subject, constantly learning and experiencing new things. I have never once believed that I know more about the subject than anyone else.

As such, I will not be pretending that I am well-versed on the film career of director Mark Polonia. To be honest, before writing this review, I had watched maybe 1 or 2 of the man’s films, and I do not remember much about those experiences other than that the films were made on an extremely low budget…. and damn, did it show. Here’s what I do know about the man and his films.

Mark Polonia is a true independent filmmaker, specializing in ultra low-budget horror and sci-fi films. Originally partnered with his twin brother, John (who passed in 2008), Mark started his career in the mid-eighties with films such as the shot-on-video cult classic Splatter Farm (as well as a film called Hallucinations, which finally saw release in 2007). In the almost 35 years since, Polonia has written, produced, and directed more than 40 films, becoming something of a low-budget cinema icon.

Due to the huge success of Independence Day, Polonia’s 1996 sci-fi film Feeders was picked up for rental distribution by Blockbuster Video and became that chain’s #1 independent-film rental for that year. While this surely did not make Polonia a household name, it undoubtedly helped expose a new audience to the joys (and/or sorrows) of independent, no-budget genre films.

Channel 13 is a shot-on-video horror anthology filmed by Polonia in the early stages of his career, sometime during the late 1980’s/early 1990’s. Inspired by classic Amicus anthologies, such as Asylum or Tales from the Crypt (Polonia’s words, not mine), the film was not completed and the master tape was tossed into a box with other unfinished projects, only to be forgotten about for nearly 30 years. Mark eventually returned to the film to add stop-motion effects that were missing from the film’s second tale, as well as filmed an entirely new wraparound sequence to help tie the film’s three tales of terror together.

The film opens in a small local arcade, or at least the arcade section of a local pub. The presence of games such as Road Blasters, released by Atari in 1987, not only verifies the time frame, but also helps create an early sense of nostalgia for that particular period of time. A young man wraps up his game and departs the arcade to head home. Upon entering his house, he grabs a beer from the fridge and plops himself down in-front of his Standard Definition television set.

He flips through the channels, slowly realizing that the only station broadcasting is Channel 13. A steady barrage of images from horror films (or, at least, re-enactments of known horror film subgenres) fills his screen. Suddenly, a ghoulish creature (in this case, someone wearing a horribly ineffective homemade monster mask) appears on the television screen. The ghoul introduces the station, as well as the film’s first “true” tale… “All Hallows Eve”.

“All Hallows Eve” is a massive mess of a tale, focusing on an unpopular teen who, through unexplained supernatural means, brings to life a killer scarecrow in order to seek vengeance against his brother and his brother’s friends for not allowing him to take part in their Halloween party. However, as the party is nothing more than just a few dudes in costumes hanging out and getting drunk, I don’t feel that exclusion from this sausage party warranted murder.

The film’s second tale, “Claws of Terror”, deals with a man’s encounter with a bizarre dinosaur-like creature while walking down a lonely, snow-covered, wood-lined road. Unfortunately, not much of note happens during this story. More unfortunately, the effect used for the creature (while created new for the film’s release) is beyond laughable and comes off as far from threatening. “Claws of Terror” takes far too long to get started and ultimately ends up going nowhere, leaving this entry feeling like a total waste of the viewer’s time.

The film’s third and final tale is entitled “Slaughterhouse”. This tale is very clearly inspired by 1974’s The Texas Chainsaw Massacre, with more than a few hints of Hooper’s follow up, Eaten Alive, thrown in for good measure. “Slaughterhouse” features quite a few scenes shot on Super 8, which had originally been shot years prior. While Slaughterhouse is easily the most cohesive of Channel 13‘s 3 tales, it comes across feeling like little more than a fan film. Seeing as how Channel 13, as with most of Polonia’s early work, is really nothing more than a few kids with cameras playing tribute to the films that inspired them, calling the film a “fan film” is fairly accurate.

Ultimately, Channel 13 isn’t much to rave about. The film is far too amateur and unfocused to rant and rave about. There is a heavy focus on gore, but the execution of those effects will sure not leave many feeling grossed out. However, it still may provide some entertainment and interest to some; particularly with horror fans that may have their own film making aspirations. The final product is riddled with flaws and shortcomings, but it still serves as a solid reminder that making your own films isn’t as impossible as you might believe. Getting people to watch that film may be a different story.

Hell, send it to me. Apparently, I’ll watch anything at least once. 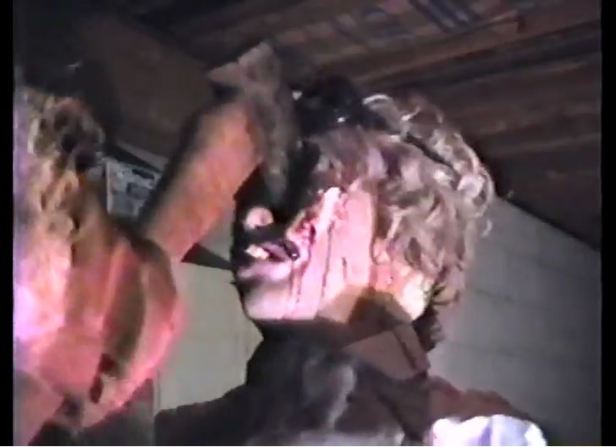 Channel 13 is available on DVD and Blu-ray from SRS Cinema.