Let’s start this review off with a disclaimer.

I have not watched Terrifier (2016). You might think that with that film’s popularity I might have considered watching the thing by now if only to have yet another topic to converse with the H&S readers about. And yes, the popularity of that film may have helped boost the site’s numbers and possibly garnered us a few more readers in the process. However, I just didn’t give a shit. Quite frankly, I find clowns to be one of the more tedious of modern horror motifs. 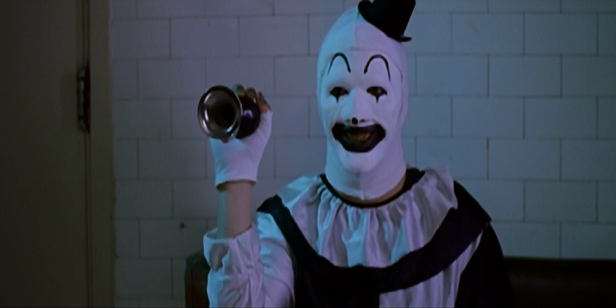 This is one of the reasons that I’ve had no interest in watching the latest iteration of Stephen King’s It. Then again, I’ve also not bothered to watch the latest incarnations of Halloween, Child’s Play, or Godzilla, so the rationale is much deeper than just my disdain for clowns.

Instead, my apprehension stems more from the premature accolades that the horror media (or ALL media outlets, for that matter) tends to throw upon certain new releases, as each and every outlet wants to feel like they were the one that introduced you to the “next big thing”. It is sites such as this one that feed you as much early access to these films as possible so that the fandom is built before the finished product has even hit the screen. Well, maybe not sites like this one. I mean those GOOD sites! You know the ones.

And then, there are people like you! Well, maybe not you, but definitely that guy next to you. He really enjoyed Terrifier. He loved the newest Halloween! He tells me that these are awesome flicks and that I should really check them out. And then one of his friends agrees with him. And another. And another.

Eventually, there is a barrage of voices. Opinions and critiques. Praise and adulation. Suddenly, it’s everywhere I look. Everywhere I turn. And that’s when I stop giving a fuck. You go watch these films! I sincerely hope that you enjoy them. Truly, I do. I sincerely hope that I enjoy them when I watch them in a year or whenever the crowd has moved on to something else.

Despite what I may have just said, such was not the case with 2013’s All Hallows’ Eve, the film that first introduced the newly minted horror “icon”* known as “Art the Clown”. In fact, maybe only one or two people had ever mentioned the film to me prior to Terrifier being released. So, really, the previous rant is kind of irrelevant to this review and now comes off as the ramblings of an angry old man who just wants nothing more than for these damned kids to get off of his lawn!

As with Terrifier, All Hallows’ Eve was written and directed by Damian Leone. The plot focuses on a babysitter (Katie Maguire, who also appears in Terrifier), and the young brother and sister under her care, returning from a night of trick-or-treating only to find that someone has slipped an unmarked VHS tape into one of the children’s bags. Although she initially protests, the children convince the babysitter to watch the tape with them.

The following review does include some spoilers, so if you have not watched All Hallows’ Eve, you may want to stop here. In fact, here’s the link to watch it FREE on Amazon Prime Video right now (or whenever). Come back and finish the review after watching the film and see if you agree with my opinions. Or not. Whatever.

Not only do these kids’ parents still have a working VCR, but it’s also already conveniently hooked up to the television set. Maybe far too conveniently. Soon, what they believe to be a horror film begins to play, even though there is no title screen nor opening credits.

The screen displays a young woman waiting for a train late at night in an empty depot. She eventually finds herself alone and confronted with a creepy mime-like clown. I’m sure you know who that is. After quietly tormenting the woman for a short while, he attacks her, injecting her with a syringe. She loses consciousness, but later awakens to find herself shackled in what appears to be a long abandoned subway tunnel.

Two other women soon appear, also prisoners in the underground lair. They warn of creatures who come to claim and kill the women. One of the them is killed during this revelation, as if to prove the point. The other is soon chopped to pieces by one of the creatures, our leading lady subdued shortly after once again. 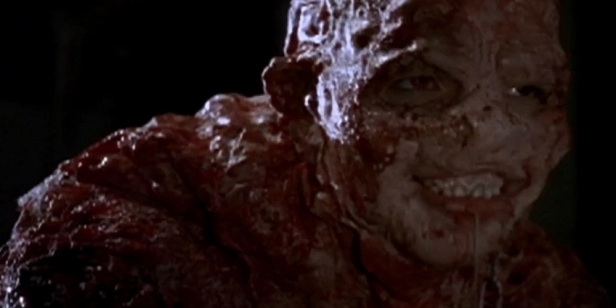 This time, however, she awakens to find herself naked and strapped to an altar. Demonic looking creatures surround her, although the clown does not reappear. It’s fairly easy to predict what happens next. However, the tale also ends at this point, perhaps leaving things feeling a little unresolved, and possibly unfulfilling for many.

The first story over, the sitter puts the children to bed, regretting her decision to let them watch such a film. She returns to the living room and, curiosity peaked, continues watching the tape. Unbeknownst to her, her custodial decisions prove to be as poor as she assumed when the young girl, frightened by the film, chooses to leave her bed in order to sleep with her brother. There is some build up of tension involving a closet door that has been left ajar, but the whole thing feels far too intent on telegraphing things to come.

The second tale focuses on a wife who, while unpacking in her new home, witnesses what she believes to be a meteor crashing to Earth. While I did issue a “spoiler alert” earlier, I don’t think it’s much of a surprise when the incident is revealed to be much more menacing. It’s aliens. There, surprise ruined.

The segment plays out like a game of cat and mouse, ripe with jump scares a-plenty. However, most of these come telegraphed well in advance, especially by anyone who has actually watched a horror film before. More troublesome, the actors portraying the aliens just aren’t convincing. Art does make an appearance as the image on a painting, but plays no actual role in the events, making his inclusion feel like a forced attempt to connect the tales.

The third and final tale of the tape finds yet another young woman who has inadvertently placed herself in the path of clown-shaped death while driving home (once again) late at night. Taking lesser traveled roads, she finds herself running low on gas. She stops at the first station that she comes across, but is greeted with the site of the station attendant kicking the clown out of his store for smearing shit on the bathroom walls.

The clown leaves, but not without first eerily smiling at the girl. The attendant is forced to return inside the station after hearing some noises coming from within. After being gone for some time, the woman enters in search of the man, and soon finds him… being “attended to” by Art!

This leads to another cat and mouse game between the evil clown and his prey. However, unlike in the previous tales, Art now seems to possess the art of teleportation. Either that, or like every other top-notch horror movie slasher, he just happens to know the world’s greatest shortcuts, as he randomly appears on the side of the road as the woman speeds away in her car.

To no one’s surprise, the clown does indeed catch up to her, leaving the tale to wrap-up in a manner that seems painfully (for her as well as for the viewer) similar to the end of the first tale. While easily the most graphically violent and arguably the most cohesive of the three tales, this finale still feels lacking in depth. Then again, all three of the stories do.

Soon, a surprising development leads the sitter to believe that what she’s witnessed on the tape may have actually occurred, leaving her more than a little frightened. Well, it’s a “surprising development” for the characters, but not for the audience as they will have probably seen this coming from the moment the film began.  All Hallows’ Eve concludes with one final shock, but fails to deliver a true “knock-out” as the scene may have lost some of its dramatic weight due to the other gruesome events that have already transpired.

Overall, All Hallow’s Eve is not an awful film. It’s just insanely predictable, which ultimately keeps it from receiving much praise. While I never once felt the urge to turn the film off, I also have no desire to ever watch it again. Sure, Art (here played by actor Mike Giannelli) is a little creepy, but does little to change my opinion of clowns. As far as free Amazon horror viewing goes, you could do much, much worse… but you could also do much better.

Overall, I have no clue how All Hallows’ Eve managed to spawn a sequel or a spinoff. It just not that special.