Spider Labyrinth, or “Il Nido Del Ragno”, is a 1988 Italian horror film from director Gianfranco Giagni. Spider Labyrinth was Giagni’s first directorial effort, and his only horror output, spending most of his career in documentary films.

The film also marks the film debut of actor Roland Wybenga. Wybenga would only make 2 other films in his career, 1988’s Run for Your Life and 1989’s Sinbad of the Seven Seas (starring Lou Ferrigno). Spider Labyrinth also features actress Paola Rinaldi, who would later appear in the video for U2’s “All I Want Is You”. Depending on your point of view, that is much more “horror” than either of Wybenga’s or Giagni’s later works. 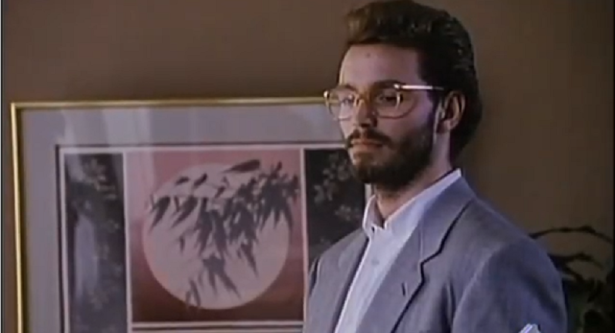 Wybenga stars as American professor Alan Whitmore. Whitmore has a life-long fear of spiders. This is explained in the film’s opening moments, when we see Alan as a child being locked in a cabinet during a game of hide and seek. Inside the cabinet with Alan is a large spider. Although the spider never actually comes into contact with him, the incident is enough to leave lasting repercussions. However, these repercussions aren’t important enough to actually play a role in the film’s plot.

Whitmore serves as the coordinator of a secret research project called the Intextus Project. Shortly after the film opens, Alan is called in to meet with his superiors on the project. He is informed of another researcher on the project, a Professor Roth, who has been living in Budapest (where portions of the film were shot). Roth had been providing the most valuable research on the project before suddenly ceasing all communications with his colleagues. Alan is tasked with traveling to Hungary to discover why Roth has gone silent. However, as Alan leaves the meeting, his superiors admit that there is more going on in Hungary than they’ve let on.

Upon reaching Hungary, Alan is greeted by Roth’s young assistant, Genevieve (Rinaldi). His attraction to the woman is immediate. She drives him to Roth’s home, where Alan is met by the professor’s wife. The professor is an older man in a clearly apprehensive and agitated state. After a few introductions, Roth secretly hands Whitmore a small book that he says contains vital and dangerous information regarding his research on the project. He advises Alan to return to see him that night, but the conversation is interrupted when a black ball (about the size of a softball or a large grapefruit) smashes through the window of Roth’s study. The older man is clearly unsettled by this intrusion. 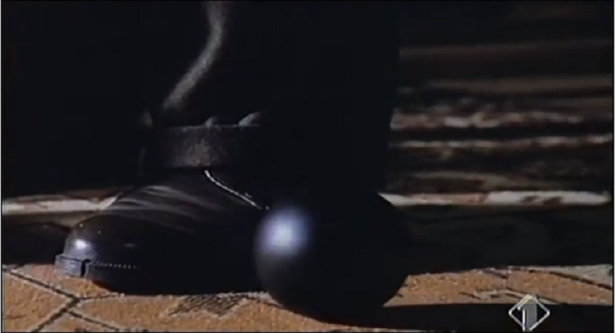 Leaving Roth’s home, Alan is then shown to the inn in which he will be staying. The inn just happens to be located across the street from Genevieve’s own apartment… and offers a perfect view of the young woman’s bedroom windows. Whitmore reads the notes that Roth had given him, learning about a sarcophagus that had been uncovered, as well as a large labyrinth of tunnels rumored to be hidden below the city. However, Alan is soon far too distracted by the image of Genevieve undressing in her bedroom to finish reading the notes.

Austrian character actor William Berger (Keoma, Ironmaster) shows up as a mysterious stranger (the only kind?) with a warning that Whitmore is headed for peril. Of course, our protagonist does not heed the warning. As if to prove Berger’s words true, Whitmore returns to see Roth, but is shocked to find that the man has seemingly hung himself. A mass of cobwebs surrounds the corpse. Whitmore asks police what has happened to the man’s wife, but is informed that no such person exists. Just as surprising, there is also no broken window from earlier in the day.

At the inn, a young maid also attempts to warn Whitmore of the jeopardy that he has unwittingly placed himself in, but is interrupted before she can finish. Alan doesn’t particularly take her warning seriously, which is really a damned shame. Especially since the girl is soon killed by a witch-like character; a towel wrapped over her face and a knife shoved into her skull. Alan is oblivious to the maid’s death as he has once again preoccupied himself with watching Genevieve disrobe in front of her apartment windows. The naked woman seems to be aware of, and even enjoying, the audience, pressing her naked body against the glass.

It’s around this point that the film begins to take on more of a dreamlike tone (nightmarish, to be more precise), trending more towards style over substance, or in some cases, logic. With Italian horror cinema, this is far from a unique approach. It’s also “revealed” at this time that the Intextus Project is a study on people from various regions who all practice the same ancient religion, although the viewer has generally figured out by then that it’s really more of a “cult”.

Overall, Spider Labyrinth is a little on the dull side, but far from what I would call “unwatchable”. It wastes no time presenting the “mystery” at hand, but then spends the next hour spinning its web, not particularly advancing the story. Witchiepoo occasionally reappears to kill off a couple more inconsequential characters, but the bloodshed is quite minimal by Italian horror standards.

There are a few neat scenes set in partially submerged tunnels littered with corpses, as well as some hit-or-miss stop-motion effects late in the film. The film also features one particularly disturbing effect near the conclusion. However, the overall product tends to feel a little thin.

Spider Labyrinth is available on DVD-R via Amazon (link). Having not watched that release, I can not speak to the audio/video quality, nor can I say if the film has been edited. Thankfully, the film is available to watch on YouTube. I have included the full film below to help save you some time.