Chopping Block is the second feature film from director Joshua Hull. As their revenge for being recently fired, a group of misfits abduct their former boss’s daughter in the hopes of a large ransom upon her return.  Little do they know, but their hostage is actually the ongoing “final girl” for a relentless “slasher movie” style killer. 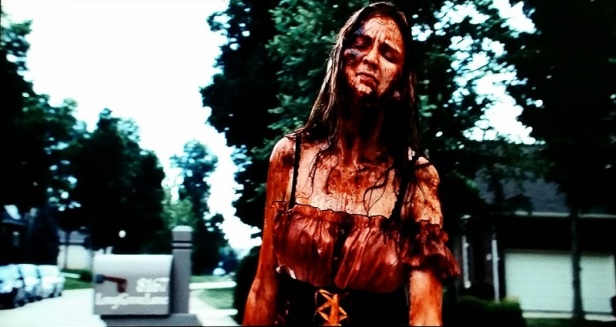 As the film opens, we find our soon-to-be abductee, Danielle (Haley Madison – Headless, Babysitter Massacre), walking down the street on which she lives. However, unlike normal strolls home, Danielle is covered in blood and appears to have very recently had the living crap beat out of her. The scene is handled quite well with the camera never shifting focus from her straining to keep moving, never uttering a word or sound as she does.  The classical music playing over the scene only serves to add to its weight. It would seem that we are watching the closing moments of our story before the opening credits have even rolled.

We aren’t. We are watching the opening moments of a sequel.

His team consists of the following members:

Steve (Raymond Kester – Scalene) – Middle aged and married, Steve is the consummate “nice guy”. This leads to him often being pushed around and barked orders at….. mostly by his wife. As the film opens, he is in need of money so that he can pay for the wedding of his lesbian daughter.

Hilary aka “Books” (Jas Sams – VHS) – The female member of the team. Easily the smartest member of the group, but also quite nerdy and reserved….. at least, when we first meet her.

Will (Bryan Wilson – Underground Entertainment): Nerdy, gay LARPer and perverse sex fiend. Will tends to creep out the other members of the group with his actions and comments, in particular…..

Richie (Alex Raaen): The target of Will’s unwanted affection. Richie is the youngest member of the team, fresh out of school and a little naive because of it.

Donnie breaks the news of the terminations to his team. Feeling guilty, he offers to take them out for a round of drinks….. even though it’s only 11am. There are some groans, but they all reluctantly agree to go. As expected, they are all shit-faced within no time. The liquor starts talking and the topic is revenge. Ideas range from Steve’s wanting to TP the man’s house to Books wanting to cyber-bully Danielle into committing suicide. It’s Donnie who first brings up the ransom idea. The majority of the group slurs agreement, but Steve diffuses the situation by telling them to wait and see how they all feel about the idea in one month’s time. Steve is banking on them losing the nerve (or completely forgetting the idea) in the morning after the liquor has worn off.

The month passes. Steve is now broke and can’t afford to give his daughter the nice wedding that she’s dreamed of. He proposes the idea of a small private ceremony. Like, in their living room “small and private”. His overbearing wife threatens to divorce him if he can’t make the wedding happen. With no other course of action at his disposal, Steve remembers the idea of the ransom and calls Donnie to set the plan in motion.

Donnie gathers the team and they begin the preparations for the kidnapping. Donnie finds a warehouse for them to use to hold Danielle captive, while Will is put in charge of buying masks. He misunderstands the requirement of the masks and purchases plastic animal face masks instead of ski masks. The gag is worth a quick chuckle, but not much more. They gather at Steve’s house to finalize their plans. When Steve’s wife catches them all standing around in their animal masks, Steve begins to panic that his wife will discover their plan. To calm his nerves, Books gives him a Xanax.

There’s sizable “padding” before the group finally sets their plan into action. One of these scenes involves the characters getting drunk yet again and dancing in a strobe-lit room while an amazingly obnoxious song about William Sonoma plays over the scene. While most of these “padding” scenes ultimately lead to nothing more than maybe a few laughs, this particular scene probably should have been excised. 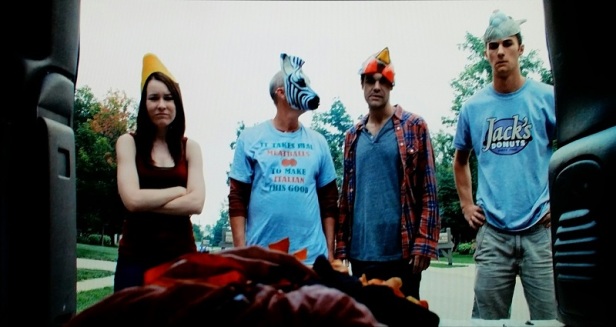 As expected, the heist goes far from hitch-free. Steve has gone from panicked to just acting goofy. It’s at this time that Books realizes that instead of the Xanax that she thought that she had given him, she accidentally gave him Ecstasy. Steve’s “trip” is the catalyst for most of the second half of the film’s attempts at comedy. While a few gags fall flat, Kester’s antics save the film on more than a couple of occasions.

Danielle is carried by Will to the van and placed in the back. The group leaves the scene and drives to the warehouse. As they prepare to pull away, the killer can be seen walking into the scene from behind them. While no face is shown at this point, the body is. This is when we first learn that our killer is female. She is dressed in what appears to be a blood-stained nightgown and carrying an axe. 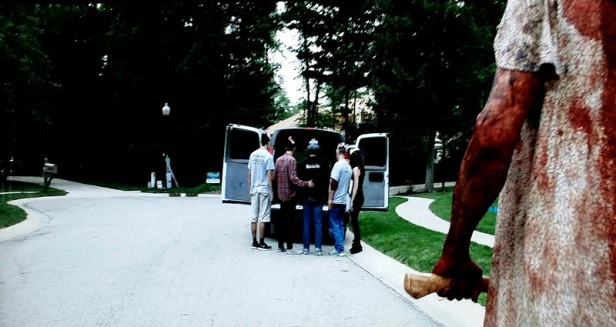 The team arrives at the warehouse and ties Danielle to a chair. The girl is out cold, presumably due to the stress of recently escaping from a murderer. I can’t imagine much stress caused by being abducted by these imbeciles. Donnie makes the call to their former boss to demand $5 million dollars in exchange for his daughter. Unfortunately, Donnie fails at his attempt to disguise his voice and is recognized. The man now refuses to pay them anything.

Danielle revives and tells her captors about the killer that continuously follows her. In this particular instance, the killer surfaced the night before while she was attending a college dorm party. This is the reason that she is covered in blood, and not because it is part of a costume, like our dimwitted kidnappers initially believed. Nor is it the result of heavy menstruation, as one of the character states. As is always the case, Danielle was the only survivor.

Unfortunately for our wannabe kidnappers, the killer soon shows up at the warehouse. Unfortunately for horror fans in the audience, this is also where the “horror” aspects of the film completely fall apart. While I am admittedly unsure if it is supposed to be a mask, the killer has a large deformed head, which is usually more than halfway covered with its long hair. Instead of attributing the killer’s appearance with any sense of real menace, the face just looks silly and shoddily constructed. There is no reason given for this design choice, nor is there any back story to explain it, thus making it a real head scratcher.

The killer’s rampage, which really isn’t much of one, takes place over the last 20 minutes of the film. Gore is wisely kept to a minimum. I say “wisely” because what is presented is quite hokey and is seemingly done more for comedic effect than for shock or revulsion. Despite the serial slasher premise, the kill count is surprisingly low, which presumably provides more reason for horror/slasher fans to be disappointed. If the low kill count and cheap effects don’t do the trick, then I’m certain that the singularly underwhelming ending will.

Made for $50,000, the film features no “name” actors or elaborate effects, and only a few different sets/locations. As stated, the film is first and foremost a comedy, so budget was never a necessity for success. The acting, for the most, is surprisingly capable, which we know is not always the case with lower budget films. The interactions between the characters is generally amusing and sometimes quite funny, but the more “adult” humor does tend to feel forced at times and can occasionally veer into straight up offensive stereotyping.

The film is worth watching at least once for its comedic efforts, but does not hold up well to repeated viewing. Those looking for a purely horror viewing experience will probably be out before the killer even shows up.