The Halls Have Eyes

In 1981, Atari released Haunted House for its thriving 2600 home gaming system. Undoubtedly, the game is best remembered for the set of disembodied eyes that the player controlled. As far as “plot” goes, if gaming even had such a thing in 1982, the objective of the game was to guide the character through the darkened halls of the haunted mansion of the late Zachary Graves in search of the 3 pieces of a broken magical urn. As the player navigates the “rooms”, they would be forced to press the “match” button (in the case of the Atari 2600, the only damned button) to illuminate a small area around them in order to locate items such as keys and weapons. In some of the harder levels, matches would need to be used in order to even see the level layout.

Now comes a modernized remake of that game. And by “now”, I mean 6+ years ago! Developed by ImaginEngine and released by Atari, Haunted House (2010) was released for PC, Xbox 360, and the original Nintendo Wii. Taking place 30 years after the original game, the grandchildren of the original game’s main character have entered the Graves Mansion is search of clues as to what happened to their grandfather who disappeared after entering the house all those years prior.

Before we get too far along in this review, it should be known that Haunted House (2010) is first and foremost a game for kids. The characters, as well as the enemies, are designed in very cartoonish fashion. Ghosts are more along the lines of the “sheet with eyeholes” old-school Halloween costume variety, and thus are not anywhere near scary. Graphics are good enough to get the job done, but are never anything close to visually striking.

Players choose between Jacob and Silvia Silverspring, the grandchildren of the original game’s main character. There are no play style differences between the 2 characters, although they each have their own individual, albeit extremely limited, set of phrases that they tend to repeat incessantly throughout the course of the game. As Silvia (who is coincidentally voiced by an actress who sounds a lot like former Facts of Life co-star/current voice of Scooby Doo’s “Velma”) keeps repeating “Jinkies!” and “OMG!” over and over at the most illogical times, she tends to be the more annoying of the two character choices. 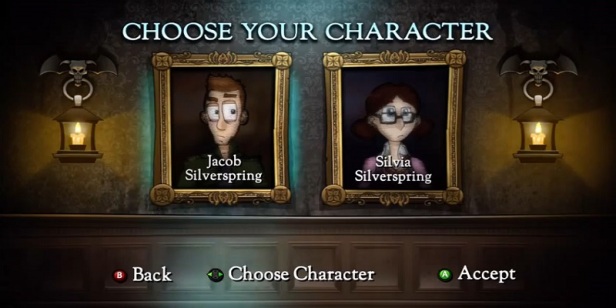 The game begins with the chosen character entering the Graves Mansion, each room covered in darkness as with the original. Your character begins the game with a cell phone that can be used as a source of illumination, but that is quickly stolen from the player by the first ghost that you encounter in the next room. From here, the player is forced to search the house for matches, candles, lanterns, and other sources of light which not only help you see your way around the various rooms, but also serves as weapons against the various foes that you will encounter. Light sources are found by searching desks, drawers, chests, and cabinets.  Lightning flashes from outside the house will occasionally illuminate the rooms for you, but they are too brief and inconsistent to rely upon.

Other items, such as keys and trophy items, are also found by searching these locations. These items are displayed in a sub-menu called the “Trophy Room”.  These trophy items include various collectibles, as well as pages from the diaries/journals of your grandfather, Graves’ wife (Amanda), and even Graves himself. Your grandfather’s notes offer basic gameplay tips (as well as a reference to an “evil book” hunting friend named “Ash”), while the journals of the Graves’ offer pieces of the back story. The collectible items serve no purpose and do not enhance the character in any way, but horror fans may get a kick out of seeing a chainsaw, hockey mask, and bladed glove buried in that list.

Occasionally, you will discover fireplaces throughout the house which can be lit using your various light sources. These not only serve as checkpoints, but also restore your character’s health, as well as damage enemies. Approaching an enemy usually causes them to chase you. So, leading an enemy back to a lit fireplace can be used as an offensive technique in case you do not currently have any light sources available or, as these light sources have a limited number of uses, if you are trying to conserve them for later use.

As stated, various forms of ghosts, bats, spiders, and other creatures of the night will attempt to attack you during your quest. As also previously mentioned, these enemies can be defeated through use of the various light sources found throughout the house, although not all of them cause damage. If a ghost or other creature does touch the player, the character will temporarily freeze. This “freeze” can be shaken off by rapidly moving the joystick left and right. If the player receives too much damage, they are taken back to the level’s beginning, but all progress made in the level up to that point is not lost.

The Graves Mansion is divided into 4 sections: The Mansion, The Towers, The Basement, and The Catacombs. Each of these are divided into 5 levels. Other than a few minor thematic and/or cosmetic differences, there is little to no variation to the way each level is played. The player essentially does the same thing in each of the levels. On each level, the player travels from room to room looking for keys that will lead the way to the level’s exit. Sometimes, these doors are opened by means of pulling levers located through each level. However, even when the player is required to pull multiple levers or find multiple keys, the feat can easily be accomplished by generally sticking to the walls and following them from room to room. The game’s challenge comes more from the number and speed of enemies increasing per level, but as the player is granted unlimited lives and no loss of progression, this never presents much of a test. As this is a kid’s game, the difficulty really shouldn’t be set too steep, but more experienced gamers may want to bump up the difficulty setting. 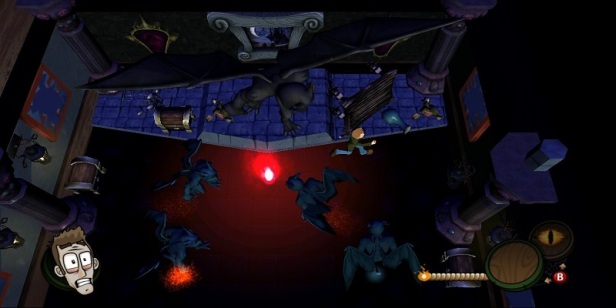 The game’s equivalent of “boss battles” come at the end of every 5th level. The “bosses” include a small colony of bats, a demon, a giant spider, and a couple more enemies. At the beginning of each boss battle, a small text window will appear onscreen to provide the player with a hint on how to defeat the corresponding creature. The player will stop moving until the window has been exited with a button press. Unfortunately, the enemies in the room with you do not, which led to massive frustration during one particular boss battle. While players thankfully do not have to endure load screen between “deaths”, repeating the same battles due to this design flaw quickly becomes an annoyance.

Adult gamers, and even kids who demand a little more from their gaming, will probably grow tired of Haunted House quickly as the game can start feeling like little more than interactive furniture inspection. There is not enough variation, if any, in gameplay mechanics from level to level to keep Haunted House thrilling for an extended time. Even the designs and layout of the various sections of the Graves Mansion feature little variation between them.

Luckily, Haunted House was a budget priced title even at its release. Even now, it can be purchased/downloaded for $5 or less. While the game is more than long enough to ensure that you get your money’s worth from length, there might not be enough here to make most players want to stick it out to the end. If they do make it that far, they are sure to be left wanting after a final boss battle that is easily the least interesting boss battle in the game.