As some of this site’s more regular readers have probably figured out, I’m a pretty avid video gamer. Or, at least, I used to be. While I still game fairly often, the hours that I am able to put into the hobby now that I’m a “responsible adult” with a career, children, a weekly blog, and other “grown-up” bullshit like that are microscopic compared to the entire weekends that I used to lose to it as a child and teenager. Oh, who am I kidding? I lost decades.

I clearly remember multiple weekends that were spent grinding my way through either the first Final Fantasy or Dragon Warrior games, scouring the latest issues of Nintendo Power for maps and cheats. And for the record, I’m one of the few people who actually bought Dragon Warrior months before Nintendo started giving it away free with Nintendo Power subscriptions.

I won’t be devoting any more time or space to either of those games or how console RPG gaming has evolved in the 25+ years since those games were originally released. That’s a good thing for me as well since I really don’t have the time or patience for such an endeavor. Instead, this piece takes a look at a game that pretty much ignores the advancements made in the genre since those early days… and really, I couldn’t be happier for that.

Developed by Zeboyd Games, Cthulhu Saves the World was originally released to the XBox 360 console on Dec 30th, 2010. The game was a moderate success and received quite a few positive reviews. However, the developers were disappointed that, due to budget and time constraints, originally planned elements of the game were forced to be removed or excluded altogether. Zeboyd Games then began a Kickstarter campaign to raise the funds needed for production of an enhanced version of the game for XBox 360, as well as PC. With a goal of $3,000, the campaign raised just short of $7,000! In July of 2011, the game was re-released as Cthulhu Saves the World: Super Hyper Enhanced Championship Edition Alpha Diamond DX Plus Alpha FES HD – Premium Enhanced Game of the Year Collector’s Edition.  The game is now also available on all Android phones and tablets.

Cthulhu, the squid-faced, dragon-winged Elder God created by H. P. Lovecraft emerges from the sea after centuries of slumber only to find his dark powers immediately sealed away by a mysterious, silhouetted wizard. A narrator then informs the player that the only way to break the curse is to become a “true hero” by performing various noble deeds. Quickly breaking the fourth wall, Cthulhu reveals to the narrator that he was eavesdropping and now knows how to break the curse.

Now on a quest to regain his evil powers by performing good deeds, Cthulhu’s first heroic feat is the rescuing of a young woman named “Umi” from the clutches of a couple of slime creatures. Instead of running away in terror or dropping into a pile of quivering flesh having been driven insane by simply setting eyes upon him, the girl is impressed by Cthulhu’s bravery, as well as his physique. Mostly his physique. Umi quickly decides to tag along as your official “groupie”. No, seriously. She’s your “groupie”. She’s even thrilled to be one. 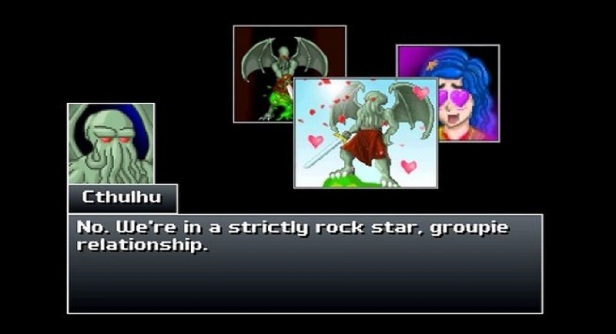 Your next heroic endeavor has you searching a cave for a missing dog named “Shane”. Upon finding the mutt, you are set upon by a trio of traveling heroes. The group consists of a warrior, cleric, and thief who have banded together to rid the land of evil. Due to our title character’s unflattering reputation, that includes “him”. The “heroes” are the first mockeries of the generic character types found in many 8-bit and 16-bit RPG’s from those early console eras.

A couple new characters join your group before another quest has you arriving in the town of Dunwich, only to find that it has been completely overrun by zombies. The party members are prepared to rush in and wipe out as many as they possibly can, but Cthulhu stops them. He refuses to let his group kill any zombies, referring to the zombies as “noble creatures”, “free of sanity”. While a humorous touch, this line of dialog serves to be untrue as you will be forced to fight plenty of them.

From here, you continue your quests, travelling from town to town, searching caves and dungeons, and adding new members to your party as you go. These additional party members include a talking sword, a female necromancer, an old healer with Alzheimer’s, a dragon, and even an intergalactic cat. On your journey, the player will travel to some of the better known locales of Lovecraftian lore, such as Dunwich, Miskatonia, and even the inn in Innsmouth. Lovecraft fans may get a kick out of seeing characters such as Nyarlothotep, Dagon, and the Ape Princess show up as boss battles. While some knowledge of Lovecraft and his works are key to understanding some of the hidden “Easter eggs” or references, it definitely isn’t essential.

Cthulhu Saves The World looks and plays just like most classic 8-bit and 16-bit RPGs, and as such serves as an homage to them. However, CSTW is also a cutting satire of those games, respectfully mocking classic RPG gaming clichés and tropes while honoring them at the same time. While it’s beneficial to the game’s humor to have some familiarity with these classic dungeon crawlers, it too is not essential.

Cthulhu Saves the World manages to stand apart from the majority of the older RPG’s through inclusion of a few seemingly minor touches. First, the game offers a “save anywhere” feature. Players can bring up a menu through the push of a button and can save at any point through that menu. Although there are save points presented throughout the game (albeit usually separated by sizable distances), those were only added after Zeboyd received multiple complaints from gamers that forgot about the “save anywhere” feature.

Also of note, all characters in your party receive experience from battles, even if that character was not actively being used during the battle. This serves as incentive for players to try out all of their party members without fear of having some “fall behind” in growth due to not being regularly used. This is of great importance when, for example, you have a character with an ability that is exceptionally useful during boss battles, but otherwise not. That character can then be set aside until needed without losing the experience growth gained by more frequently used characters.

The game also presents players with a “sprint” button, allowing them to traverse the various landscapes and dungeons with some sense of speed. This alone is a vast improvement over the slow-moving characters in RPGs of yesteryear. However, as compensation for this, the game allows 25 random battles per area (50 in the last dungeon). After the player has fought those 25 battles, they may still activate a battle at any time from the same menu screen that you use to equip your characters or to save your game. This can be used to a player’s benefit if they want to level up a character or two before an impending boss battle or other difficult situations.

The only complaint that I had with the game is that while the main story can be completed in approximately 10 hours, the last few dungeons tend to be a little too long for their own good, thus causing the game to feel like it’s dragging itself out. I’m not alone in this thought as the game’s director states the same at one of the multiple “behind the scenes” info centers scattered throughout the Director’s Cut of the game. Other than this small issue, the game moves at a fairly steady pace, although pacing in RPGs is really at the player’s discretion.

Fans of classic RPG gaming would be doing themselves a favor by checking this one out, while the more ardent Lovecraft fans may enjoy seeing the multiple references to the author and his legendary body of horrific fiction. As even more incentive for gamers to take a chance on this one, CSTW can be downloaded for incredibly cheap, with downloads ranging from as low as $1 on XBox 360 up to $2.99 for Steam (PC). Highly Recommended.

One thought on “Cthulhu Saves The World (2010) – Video Game Review”