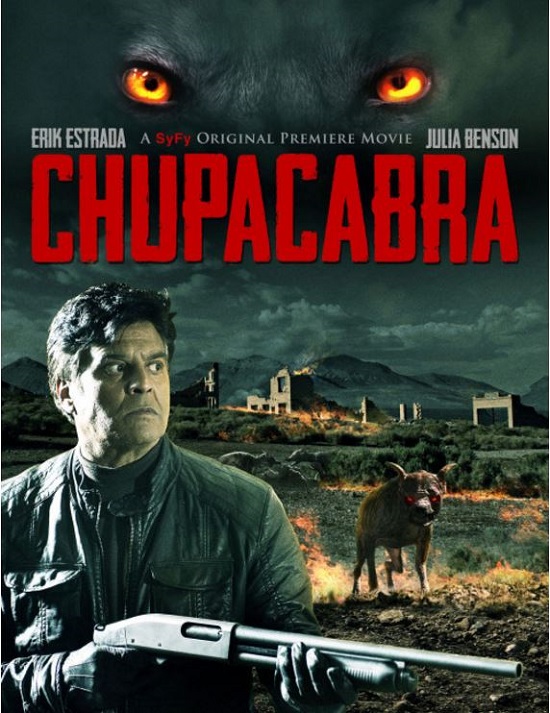 Purchase Chupacabra vs. The Alamo

There’s No Basement At The Alamo

If SyFy Channel‘s Original Movies are good for anything, it’s being an outlet for stars that no longer shine as bright as they once did to find some work and possibly one last gasp at fame. There are more than a few examples where the “star” is wasted in a film that is beneath their talents, and if anything, shows that this actor/actress still has more to give than what’s usually found in a made-for-TV, CG-heavy, piece of trash. Perfect examples of this would be the casting of Patrick Swayze in the abysmal Dragon Sword or James Spader in the actually-not-that-bad Alien Hunter.

Then, there’s the films showcasing an actor whose 15 minutes of fame arguably lasted a few minutes too long, but have long since ticked away nonetheless. These actors generally tend to get cast in the worst-of-the-worst SyFy films. I’m talking about Jimmie “JJ” Walker (Good Times) showing up in Super Shark or Danika McKeller (The Wonder Years) in…. well, just about anything. Sorry, guys! Winnie Cooper just never “did it” for me. Now, Heather’s friend, Angela, on Mr. Belvedere? Hell yeah, son!!!

The “star” featured in today’s subject is none other than former CHiPs star, former heartthrob/poster boy, former tele-novella star Erik Estrada. As with a lot of television stars, Estrada’s star started falling after the cancellation of CHiPs. Erik stayed working with occasional roles in horror and sci-fi films (Spirits, Alien Seed) of decreasing budget and marketability, as well as starring turns in (as previously mentioned) Spanish channel soap operas. As Erik aged and his heartthrob status slowly vanished, even some of those roles started drying up.

Which leads us to what we have here…..

The film opens at the US-Mexican border. The on-screen text states that this is just outside the city limits of San Antonio. San Antonio was presumably chosen as it’s a more widely recognized city than border towns like Laredo or McAllen, but as it’s also around 100-150 miles from the border, it sets an early example of facts not being important. A small group of traffickers are in the middle of a baggage exchange in a tunnel running under the border. The criminals are soon attacked by a pack of creatures and are quickly torn to shreds.

Estrada stars as DEA agent Carlos Seguin. Carlos is a recently widowed father to his impressionable teenage daughter, Sierra. Carlos also has a son named Tommy, but the relationship has since become estranged when Tommy turned to a life of crime. Of minor note, but yet important enough to be mentioned multiple times, is that Carlos is a descendant of Texas Revolutionary figure, Juan Seguin.

When we first meet Carlos, he is asleep in bed in his suburban home. He is woken by the sound of his daughter and her friend, Brooke, sneaking in after curfew. After sending Brooke home and grounding Sierra, Carlos is called off to investigate the deaths in the tunnel. Carlos dons his best black leather jacket, hops on his motorcycle, and rides off to the crime scene. This will lead the viewer to their first indications of just what kind of viewing experience they will be in store for.

His “drive” is accomplished by means of laughably hokey green-screen effects. This very well may have been a nod to when the same style effects were used on CHiPS, but it just looks awful and significantly more ineffective than it did on that show 40 years ago. It’s also worth noting that Carlos must have driven the actual 100+ mile distance from San Antonio to the border because when he leaves his house it is still night, but when he arrives it is very much daylight out.

Carlos arrives on the scene to meet with his team. He is introduced to a new partner, Tracy (Julia Benson – Masters of Horror: Right To Die, Dead Rising: Watchtower), an attractive younger female detective with a medical degree and a MASSIVE rack. (No, really. They’re HUGE! Go watch that Masters of Horrors episode I mentioned for a better view.) Benson is also one of the few Caucasians in the cast, so she’s easily identifiable. Seriously though, she does deliver the film’s better performance. Carlos immediately treats her like a rookie, his first order being for her to find him a cold bottled water. It’s the same old tired cliché that you’ve seen a million times and it is just as transparent here as it is in most other cases.

Be on the lookout for a continuity error here when Estrada first arrives to the tunnel. When he first enters, his jacket is very clearly covered in numerous drops of water, even though we’ve seen no rain. Carlos and Tracy then walk through the tunnel while condensation drips on them from above. This serves to show that the scenes were filmed out of order. It also shows that no one thought to towel off the “star”. Sorry, Ponch! Those days are long gone.

Even though none of the characters consider the creatures to be more than folklore, everyone just kinda “goes with it” when the attacks are found to be from chupacabras, aka Mexican Goat Suckers. The chupacabras are created through the use of shoddy CG, which has the drawback of making the creatures range from as large as coyotes to as small as chihuahuas. Also, the chupacabras are seen congregating in groups of as many as over one hundred at a time. You would think that with a population that numerous that there would be enough empirical evidence to take them from “myth” to scientific reality.

The chupacabras make their way into the city through the tunnels, first terrorizing and mauling a group of high school kids at an unchaperoned party. As should be expected, Sierra and Brooke are in attendance. Naturally, this massacre is a total buzzkill. It’s even more of a buzzkill for Brooke’s boyfriend who is castrated while trying to take a drunken piss.

Carlos arrives in time to save his daughter and her friend, taking them to safety at his house before returning to work. He would have been better off sticking around because the suckers soon show up at his house to continue their attack. They force their way in, leading to a fight in the kitchen that is a complete rip-off of the scene in Gremlins with Billy’s mom using appliances in her defense.

Carlos rides his motorcycle back to his house… again. On the way, he finds that the way is blocked by road work. Not sure why he didn’t have this problem just minutes prior, but whatever. In order to get past, Carlos uses 2 boards that have been discarded onto a pile of debris at just the perfect angle to jump the roadblock. I’ll make my own reference to 1970’s prime time television by saying that there should have been a shark tank for Estrada to jump because this is also the moment that this already floundering film jumps its own shark.

Sierra is injured in the attack. Her predicament is justification enough for Tommy to temporarily put aside his differences with his father and to team up with him in an effort to eradicate the Suckers. As reinforcements, Carlos enlists the help of an “elite” SWAT team, while Tommy calls in his “gangland” homies. All 3 of them. It’s an overly melodramatic scene meant to show the bonding between father and son, but it fails miserably on all emotional fronts. 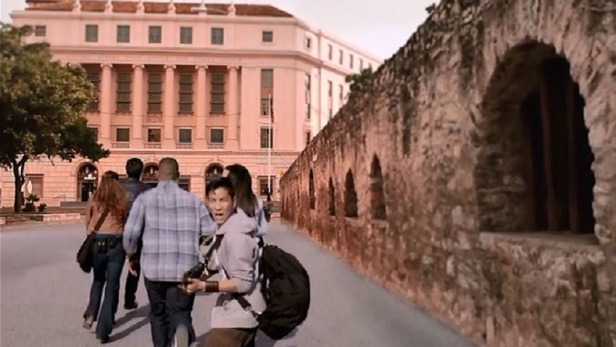 The raid is an unmitigated failure and the surviving members of our group are forced to hold up in the Alamo. Only thing is…. they aren’t really there. While there is some stock footage used, the cast are instead green-screened over stills of the landmark. While this definitely had me laughing, it’s also extremely disappointing to think that someone deemed the landmark important enough to name the infernal film after, but not essential enough to actually film there. Forced to used surprisingly still-working weapons taken directly from the Alamo’s display cases, our heroes (along with an Alamo tour guide) must make an infinitely anti-climactic final stand against the stunt-doubles for the “Yo quiero Taco Bell” dog. The film feels forced to make the predictable “Chupa this!!” line, and it’s much more painful than you might imagine.

Chupacabras does feature some gore, but it’s presented on-screen only minimally, thus making it safer for older kids. Especially if you hate that little shit. What isn’t presented is much of a reason to watch the film other than the bizarre fascination of seeing a star that has long since faded. Just like the creatures that it attempts to showcase, Chupacabras Vs The Alamo sucks.