on DVD from Amazon!

1992’s Hellmaster is the 1st film from writer/director Douglas Schulze. I point that out as the fact that this is a debut effort may explain some of the faults that I found with this film. The key word here is “some”, for it quickly becomes painfully apparent that not all of the film’s many shortcomings and/or total failings can be blamed on the director alone. Granted, the over-eager enthusiasm of a fledgling filmmaker undoubtedly played a role in the film’s numerous issues, but this was clearly a case of collective failures.

The film opens with Nietzsche’s infamous “God is Dead” quote. This is not only an allusion to the mentality of the central villian, but as Nietzsche is considered by many to be just a grumpy douchebag with “Dead Daddy” issues, it’s also an indication that the proceedings shouldn’t be taken too seriously, at least not as seriously as the filmmakers might have hoped. Sadly, it’s also a pretty bitchin’ tagline as far as 90’s horror goes. Shame they didn’t use it on the cover art.

We are introduced to Robert (David Emge – Dawn of the Dead, Basket Case 2), a reporter covering the bizarre drug-related deaths of multiple homeless people. Followed by his cameraman, Robert enters an abandoned building that homeless have collected in. The sequence quickly evoked flashbacks of when Geraldo went looking inside Al Capone’s vault, or even that episode of Tales From the Crypt with Morton Downey Jr. as a talk-show host who unwisely decides to film inside an allegedly haunted house. Inside the house, Robert finds bloodied bodies strewn about. Those still living now act as if possessed, bloody crosses carved into or painted on their foreheads.

The scene ends and, without much notice or explanation, picks back up 20 years later. This may cause at least a few minutes of uncertainty as to what has just happened. Get used to it, folks! This is going to be a very common theme for Hellmaster. All we know at this point is that Emge is still around and now hanging out at what appears to be a dilapidated old church. It is indeed a chapel, one that lies abandoned on the grounds of a college campus. This fact can be inferred, but also is not clearly explained for some time.

The scene shifts yet again, this time to a family car pulled off the side of the road. The father is jacking up the car to fix a flat tire. His oldest daughter, Tracy, puffs away at a cigarette while bitching about how this will make her late for her first day at her new school.. The younger daughter, maybe 8 or 9 years old, sits in the car listening to some shitty hair band playing on the radio. When Tracy takes a seat in the car, her sister tells her about a large, grey school bus that has pulled up behind them. There is a crooked cross affixed to the front of the bus and the words “Happy Face Bible School” are painted on its side.

Tracy exits the car just in time to see her father being dragged under the bus. She is set upon by something dressed as a nun, but with a disfigured, almost demonic appearing face. Tracy manages to escape, making her way back to the car. She tries to drive off, but the car is still jacked up for the tire change and does not move. A man with a slashed-up face pops up in the back seat. A brief struggle occurs before the opening credits begin.

The film reopens outside of the Kant Institute School for the Gifted. We are introduced to a classroom of students attending a televised lecture given by a Prof. Damon, presumably the only person employed at the school since we never see any other faculty members. I’m not sure what the class subject is, but today’s topic is open debate on the plight of the homeless. There’s some mention of Malcolm X, but seeing as these are some of the most lily-white cracker-ass honkeys I’ve ever seen, I’m just going to assume that they had Malcolm X confused with Racer X.

The class is made up of stereotypical character types. There’s the antagonistic jock type with a large ego and a small brain. He’s the kind of character that makes you wonder how he got into college in the first place. There’s Shelley (Amy Raasch), the “smart girl” heroine lead. There is the nerdy male friend, Joel; his “oddball” status compounded by a massive physical handicap. There’s the black kid that doesn’t exist. And then there is Drake, the secondary male lead. He’s not the “hero come to save the girl”. He’s not the potential love interest. Actually, due to the massive oversight of not developing the character, he’s not really much of anything.

There’s a brief scene in a computer lab that exists only to marginally suggest that Shelley has budding pre-cognitive abilities. It feels as if this were meant to be more of an important element, but as with the majority of things that might have been important, Hellmaster spends no time exploring it. This will hurt the film in the later stages as it is meant to be quite essential in the film’s conclusion. 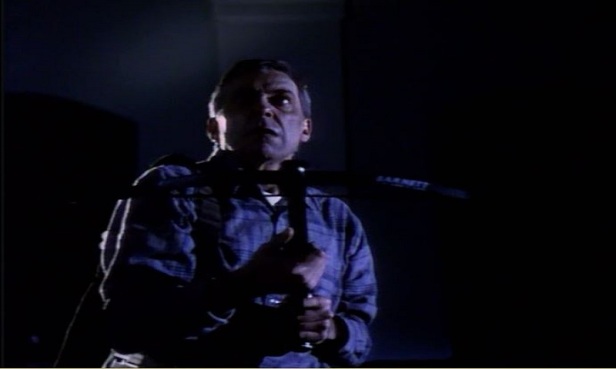 Meanwhile, Robert (Emge) is still hanging out in the chapel and generally creeping out the student body. He’s seen readying a crossbow loaded with syringes in preparation for some confrontation that only he seems to be aware of. Prof. Damon confronts him, asking him to leave the grounds, but Robert accuses him of covering up the deaths of multiple students some 20 years earlier. Damon claims that the students died in a freak fire, but he’s caught off-guard when Robert states that he’s found a series of secret corridors running underneath the school.

Damon finally admits that a former professor at the school, Dr. Jones (John Saxon – A Nightmare on Elm St., Tenebrae) created a compound that could raise a subject’s intelligence, as well as enhance telepathic abilities. As is usually the case, the experiment failed, killing all of the students involved. In an attempt to save the school’s reputation, Damon burned the bodies to cover up the experiment. Saxon soon emerges from the shadows of the corridors. He states that he’s been in hiding the past 20 years, secretly testing his serum on the homeless and essentially making them his evil minions. He’s now returned to claim the students of his old school.

A power outage soon darkens the campus. Phone lines have died as well. Campus security are dispatched to investigate and quickly come across the church bus. As expected, they are set upon by Razorface and the Nun. The 2 security guards are tied to the back of their patrol car and dragged back to their station where Shelley has been hanging out this whole time for no clearly discernible reason. One of the guards has survived this ordeal and crawls away. After an extended period, another character casual mentions that this guard is Shelley’s brother, a fact that arguably would have given the previous sequence of events a little more emotional “weight” had we known earlier. It would also have explained Shelley’s seemingly odd choice of hang-outs.

With no lead up whatsoever, the film suddenly re-directs its focus to a blonde female student that we’ve not seen before. We first meet her as she is wandering through those same secret corridors that Emge previously mentioned. The ones that were so secret that she was able to easily find them. She’s there to look for “Paul”, another character that we should be accustomed with, but have also not been previously introduced to. Even though we’ve not been introduced to Paul, he’s been introduced to the rumors of what happened at the school 20 years earlier, a fact that up till now had only ever been mentioned by Robert. 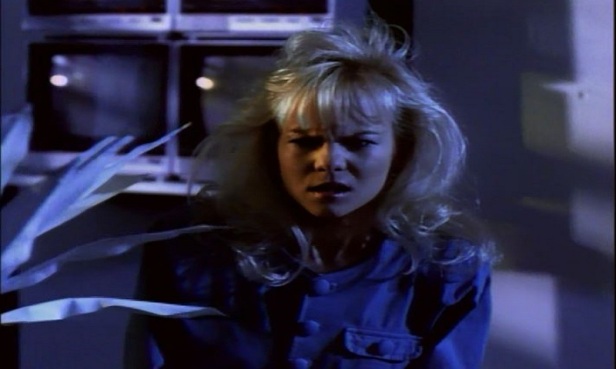 More of Saxon’s mutations appear and a few of the students disappear, but our nameless damsel in distress carries us from scene to confusing scene for another 20 minutes before anyone bothers to tell us just who the Hell she is or why we should care about her. It’s finally revealed that her name is “Barb” and that she is also the target of Joel’s crippled little affections. As with almost every thing Hellmaster throws at the viewer, this may have felt more relevant had we seen a peep of Barb earlier in the film.

Raasch gets to fully demonstrate her limited emotional range before Emge delivers an amazingly monotone narration to a tacked-up flashback that finally reveals what the plot of this movie actually was. This is where you find out most of the stuff I’ve already told you, but there’s also a minor sub-plot involving Saxon destroying Emge’s family. Believe me, it’s quite superfluous and only further muddles up the collection of pieces that is Hellmaster.

At a budget over $2 million dollars, it seems as though Hellmaster is a victim of its own over-spending, as well as some shoddy editing. In the commentary featured on the Mackinac DVD release, Schulze comments on the scattershot editing, but also makes a snarky remark about production associates telling him on set that he was thinking “too big” with the project. Watching the film now, it does indeed seem that Schulze had too grand of a story in mind and too little of a budget to accomplish it, leaving the film feeling like a collection of unfinished ideas.

There also seems to be an over-reliance on the presence of Jones’ group of mutants. While the make-up effects aren’t necessarily weak, the creatures just aren’t all that engaging. There is definite importance put on the nightstick/sickle hybrid that Razorface carries around, but it’s just not an intriguing weapon, nor is it used in visual compelling ways.

If I can give Hellmaster one compliment it is that the film does feature it’s share of nice, gooey deaths

What? I said ONE compliment.

Schulze would finally resurface 10 years later in 2002 with Dark Heaven. He would also go on to direct 2009’s Dark Fields (starring David Carradine, Dee Wallace, & Richard Lynch) & 2015’s The Dark Below. Schulze seemingly has a deficiency when it comes to adjectives.