As long-time readers of this site may know, there is usually no real logic or plan behind what films I choose to review on this site or when I choose to review them. Sure, there are those indie films that I have reviewed at the request of their director or PR managers, as well as a few blu-rays that I have been sent for review by distributors. However, outside of those exceptions, the films chosen for review are nothing more than what I’ve recently watched. And many times, I’m left wondering why I ever watched these films to begin with. For this review, I know exactly why I chose to watch the film… which only leaves me questioning my propensity for poor decision making. At least, now I can say that I’ve finally reviewed a “shark attack” film, but no, that was not my reason for choosing this specific film.

Saltwater: Atomic Shark debuted on television (on SyFy) in the summer of 2016. The film was directed by A.B. Stone, who also directed the SyFy-produced “franchise mash-up” Lake Placid Vs Anaconda. Stone’s only other directorial credit is a 2016 sci-fi film entitled Cozmo’s, which featured stars from “Star Trek: Voyager“, “Babylon 5“, and (for some reason) Drake Bell of Nickelodeon’s “Drake & Josh” and internet pedophilia fame. “A.B. Stone” is believed to be a pseudonym for actor and filmmaker Griff Furst, who has appeared in films as varied as Devil’s Due, Jolly Roger: Massacre at Cutter’s Cove, and Terminator Genisys, and is also the son of the late Stephen Furst (Animal House, “St. Elsewhere“, “Babylon 5“). Griff’s directorial efforts include films such as Swamp Shark, Ghost Shark, Trailer Park Shark, and Nightmare Shark. For the record, I don’t see myself in a rush to review any of those films.

Saltwater: Atomic Shark focuses on Gina (Rachele Brooke Smith – The Last Exorcist, Bring It On: Fight to the Finish), who works as a lifeguard while studying to become a marine biologist. After discovering irradiated fish washing to shore, Gina learns of a shark that is killing swimmers and boaters off the coast of San Diego. However, as she and many others will soon discover, this is no ordinary Great White. (They never are.) Instead, this particular man-eater has become so contaminated with atomic radiation that it causes damned near everything that it comes into contact with to burst into flames. “Damned near” is a phrase worth remembering as it plays an important part in developments late in the film. Actually, it doesn’t play a part, and that’s why it’s worth remembering.

The film opens to find a charter boat captain (Jeff Fahey – The Lawnmower Man, Planet Terror) out on the water, his customer water-skiing behind the boat. The skier is the first to notice the shark and attempts to alert the captain, but is devoured before the captain has much chance to comprehend just what is happening. While there is little to no remorse or sadness for the demise of this unessential character, there is a plume of smoke emanating from the shark, which is what draws the captain’s attention.

The shark continues its attacks, eating and/or incinerating more swimmers, body surfers, boaters, and parasailers. There’s even a sequence featuring the staff and patrons of a beachside bar and grill called Tales from the Dockside (spelled “Tails” on background signage), as well as the crew of a televised restaurant-review show, bursting into flames after munching on some toxic fried fish. Unfortunately, this is all achieved through the use of some highly unconvincing CGI effects. In fact, some of the extras don’t even seem to know that they are supposed to be on fire, looking quite calm and complacent with the fact that they are burning to death. 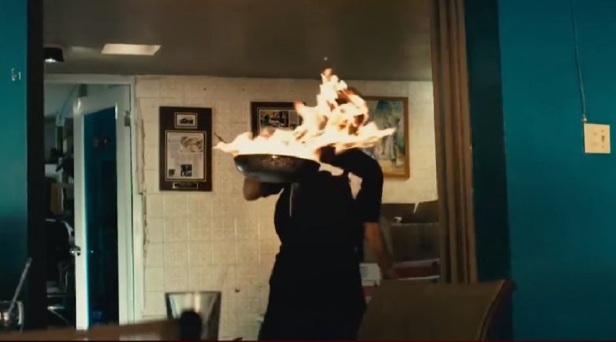 When local and government officials deny the shark’s existence and claim the incidents to be the result of freak accidents, Gina decides that it is up to her to stop the atomic shark once and for all. She enlists the help of her friend and fellow lifeguard, Kaplan (Bobby Campo – The Final Destination, “Scream: The TV Series“), Fahey’s “boat captain”, two social media “environmental activists”, and an expert drone operator (“Married… with Children” co-star David Faustino), who uses his skills to film unsuspecting “beach babes” for his website. As an unabashedly devout “Married… with Children” fan, the presence of “Bud Bundy” himself was the sole reason for choosing to watch this film. Again, questionable decision-making.

The cast is rounded out by a couple other lifeguards, including their stereotypical, overly “by the books”, hard-ass boss, as well as an air-headed female lifeguard who is more concerned about posing for pics for her Instagram followers than she is about actually saving lives. Honestly, these characters only exist to help pad out the film’s threadbare plot, as well as to pad out the shark’s growing belly.

The film does begin to amp up halfway through its runtime with the shark beaching itself to kill off numerous beach-goers, but I can’t say that the mayhem that ensues is much different than what you would find in countless (and really, there are a plethora) other SyFy-esque “shark attack” flicks. Like many of these films, Saltwater: Atomic Shark attempts to add some comedic flair to its carnage, coming off just as ludicrous and asinine as the majority of its cinematic kin. Unlike many of those films, however, Atomic Shark becomes more than a little too obsessed with social media-themed jokes. Maybe there is a subset of horror and/or schlock fans who will appreciate this approach, but I can’t say that I personally know of any. Where I will give the film some credit is that it has the balls to brutally kill off at least a couple children, one in surprisingly graphic, but (again) not overly effective, fashion.

The film reaches its climax with its crew of varied misfits finally heading out to kill the shark, while Faustino’s character tracks it from the boat (there are actually 2 boats used for this mission, but who cares?) with one of his drones. The plan involves luring the shark far from the mainland as its death will cause a nuclear blast capable of annihilating most of the West Coast. As with most shark films, most of the cast will not survive the trip. At this point, Saltwater: Atomic Shark dives headlong into comic territory, with its numerous attempts at humor flying fast and steady. While humor, much like opinions on film, is purely subjective, I just didn’t find these attempts as entertaining as the filmmakers may have hoped, although I do admit to chuckling at a few of the more goofy moments.

What is undeniably more questionable, and occasionally stupefying is the film’s lack of comprehension regarding combustion and explosive materials. As previously mentioned, the shark’s presence tends to make whatever it comes in close contact with burst into flames or explode. However, this reaction somehow seems to exclude things such as boat engines, gasoline, and dynamite. While I can usually overlook “flawed science” in films such as this, here it was a case of being asked to bite off more than I could chew… and presumably more than the shark could chew as well.

The majority of the film’s cast give generally unconvincing performances, with Faustino occasionally looking embarrassed by his presence in the film and Fahey more than often coming across as bored by the whole thing. Hey, a paycheck is a paycheck… I guess. Smith may give one of the film’s stronger performances in the film… or she might not. As the actress is quite attractive and clad in a red bikini for the entire film, I honestly may have been too distracted to really pay attention to her acting abilities. Then again, as the whole damned film is something of a train wreck, anything shiny would have distracted me as well.

Simply put, for better or worse, Saltwater: Atomic Shark is mindless, no-budget, cinematic fluff. Some viewers may find amusement in the sheer audacity of the film’s ridiculousness, but I surely was not one of them. Like many others, the film does leave the door open for a sequel. That said, it seems highly unlikely that one will ever surface. You can take that last sentence as the 2nd positive thing that I can say about this film.

As of the time of this writing, I was unable to find Saltwater: Atomic Shark on any of the streaming sites, but (to be fair) I didn’t really look that intently either.