Our next contributor in this year’s series is Bill Van Ryn. Returning for his 4th year of the series, Bill is presumably known by many as the face behind the Groovy Doom Facebook page. He is also the creator and editor of Drive-In Asylum, the fanzine that not only I contribute to, but that a handful of this year’s other featured writers also contribute to. As a matter of fact, there’s a new issue about to release featuring a stellar interview with independent cinema legend Bill Rebane that I highly recommend picking up! (Ahem.)

For this year’s entry, Bill takes us back to October 10th, 1973 for a look at the made-for-television creeper Don’t Be Afraid Of The Dark. That’s right, ghoulies! Today’s Halloween Horrors entry first aired on the ABC Network 46 years ago today!! That said, if you haven’t had the opportunity to previously watch this film, you might want to check out the upcoming Warner Archives blu-ray that is scheduled to release later this month! Here’s the Amazon link. LINK

Well, here’s the “Boss” with this year’s Halloween Horror! 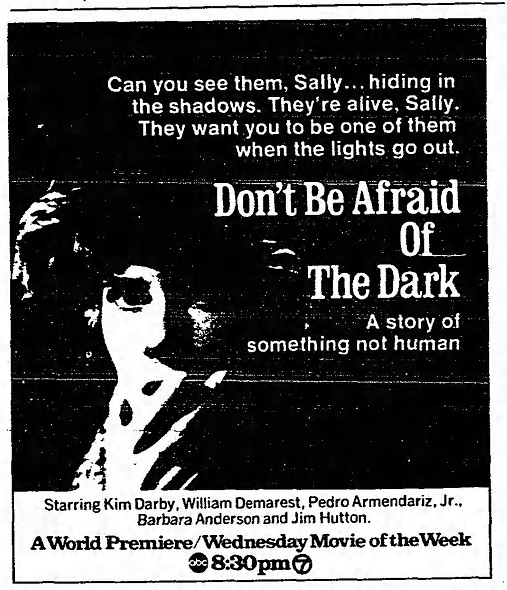 Don’t Be Afraid of the Dark

It’s that Halloween Horrors time again, and a haunted house is a classic Halloween scenario, is it not? Well, how about a dark night? A scary wind storm? A house full of goblins that crawled out of a very dark pit hidden beneath a fireplace? The TV horror classic Don’t Be Afraid of the Dark is just the thing you need to get you in the spirit of All Hallow’s Eve’n.

Poor Sally Farnum! She and her husband have just moved into the house she just inherited from her grandmother, and all she wants to do is turn a creepy basement room into an office for herself, where she can sit in front of a roaring fire and make out her grocery list. But the fireplace is all bricked up, and the old handyman, Mr. Harris, the one who worked for her grandmother years ago, says that she better leave it alone. Sally, on the other hand, is determined to do whatever the hell she wants, even if it doesn’t quite make sense. Like for some reason, when she can’t smash open the bricked-up fireplace, she decides to open up the bolted-shut ash door on the side. This is pure horror movie foolishness, because she doesn’t know that there was a very good reason for Sally’s grandmother to have bricked up the damn thing: it was the only barrier holding back a group of tiny, chanting goblin creatures with creepy voices that know Sally by name. They relentlessly menace her for the rest of the movie’s runtime, whispering her name and urging her to join them so they can take her back to their dark place. 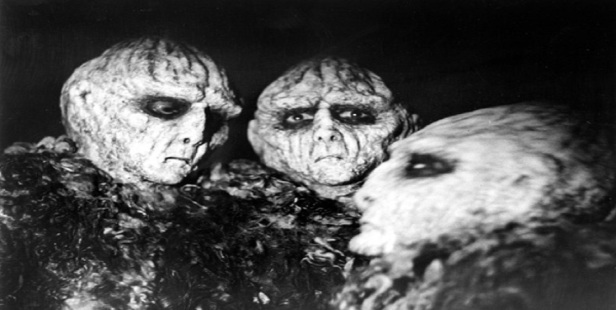 The early 70s were an especially prolific time for TV horror, and Don’t Be Afraid of the Dark was broadcast a few weeks before Halloween in October 1973. When you hear people talk today about seeing it when it was originally broadcast, they usually remember it because it freaked them the hell out, much like the prime time sneak attack of Trilogy of Terror that came a few years after this. In today’s world of movies on demand, it’s hard to wrap your head around the fact that your entertainment options were way more limited before VHS and cable TV, and some people ended up watching scary movies without knowing ahead of time what was in store for them.

But to me, this movie’s tension comes from the sheer helplessness of its main character and her increased isolation among people who are supposed to care about her. Something unexplainable is happening to her, but she can’t get anyone around her to acknowledge it, particularly her terribly unsympathetic husband, Alex. One of the first shocks in the film is when the goblins run up on Sally in a dark room and start pulling her by the bottom of her dress, whispering “We want you! We want you, Sally!” She freaks out and tells her husband what happened, but his response is to become immediately angry and to silence her by yelling “Stop it!” He treats her like a child, screaming at her whenever she says anything about the goblins, and I almost expected him to start hitting her. I realize that if anybody told a story like Sally tells, they could expect some skepticism, but I would hope at least my own loved ones would get help for me, or at least take me away from whatever was making me freak out.

And these nasty things mean business, too. In one scene, they turn the lights out on her when she’s in the shower, and then babble amongst themselves about how badly they want to cut her with a razor. “No, don’t hurt her yet, we’ll get her tomorrow!” They even kill Sally’s interior decorator by tripping him down the stairs, even though they admit to Sally afterwards that it was an accident, saying “It’s YOUR spirit we want! You set us free! Whoever sets us free must be one of us!” 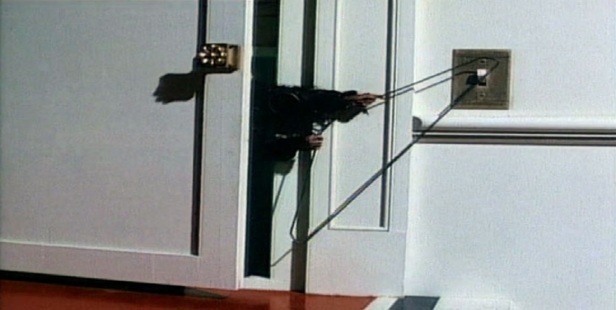 I debated getting too spoilerish here, but you’ve probably already seen this movie from 1973, and it’s relevant to say that this film’s downbeat ending has a lot to do with its creepy impact; after spending the entire movie listening to these goblins whispering ominous things, at the end of the movie we hear Sally’s voice among theirs, doomed to exist in whatever weird alternate dimension they inhabit and waiting for their next human victim to set them “free! Free! Free in the world!” It’s no wonder, though, that things don’t work out so well for our Sal, since even her gal pal Joan doesn’t believe her story until it’s too late. Even after Joan and Alex decide that there really may be something to this after all, it doesn’t stop them from getting her out of the house. Even more improbably, Sally herself never simply walks out the front door, which was the obvious solution to her whole problem.

Things don’t always go as they should, however, and Don’t Be Afraid of the Dark is a welcome twist on the haunted house theme. The film contains its own unique mythology, mostly implied instead of spelled out, which lets you use your imagination a little. It’s a perfect Halloween watch, given the spooky setting — the big old mansion is immediately recognizable as the Piru Mansion, which featured in numerous other movies and TV shows, even fellow TV horror movies like Curse of the Black Widow and Tarantulas: The Deadly Cargo, both from 1977. The creature makeup is extremely well done and actually quite disturbing, even if the miniature effects aren’t always totally convincing. Director John Newland uses the closeups of the goblins effectively, lighting them in reds and blues as they lurk behind oversized books, lean out of cabinets holding gigantic wire hangers, and peer at our heroine from behind decorative floral arrangements, and part of the delicious mystery of the movie is imagining how human beings could become one of these withered, misshapen monsters. The 2010 theatrical remake removed any guesswork by giving us a detailed explanation of its creatures, which made the film less instead of more. I’ll take Sally and her big spooky house with its pointy-headed goblins any day.