Paul Ashford is another long-time friend of ours, and has joined up for ALL 5 years of our Halloween Horrors series. While many of you may know Paul from his wildly popular Facebook page, Little Rubber Monsters, you might not know that he is also involved with the Ghoulies Movies page now. So, if (like me) you are a fan of the Ghoulies film series, you may want to go check that out.

For this year’s entry, Paul takes on an obscurity from the early 1990s. As the film seemingly received little to no mention in the US at release (and not much since, either), this may be one that many of you are unfamiliar with. As such, a YouTube link to the full film as been included at the end of this article. I guess this series is “educational” as well.

So, sit back as Paul takes us on a little journey that features it’s own LRM, plenty of blood and gore, (maybe) a few laughs, and some good ol’ down-home kitchen sex!! 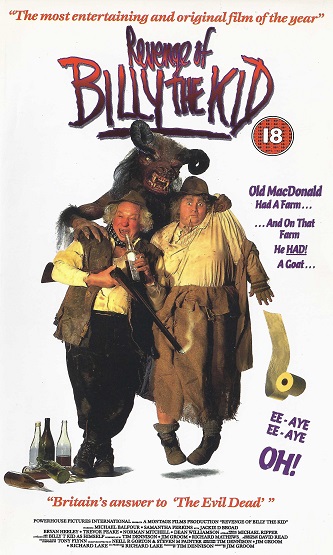 “Britain’s answer to The Evil Dead!”, screamed the tagline on the video case in Blockbuster…

As a teenager at the time, and a horror fan too young to rent the movie myself, it wasn’t until I turned 18 in the late 90s that I finally got to see this masterpiece. In fact, this was my first ever video rental from Blockbuster as an “adult”, and the fact I chose this one over anything else probably says a lot about my taste in movies.

It was the tagline that first had me intrigued. However, upon watching it for the first time, it was clear that Revenge of Billy the Kid had much more in common with the likes of Peter Jackson’s Bad Taste… but I guess that wouldn’t be such an attention grabber to stick on the front of the VHS.

So what exactly do we have here?

The plot follows the McDonalds: a family of farmers living on a small island in the UK, led by Gyles McDonald, who one day decides rather than taking his goat to the mainland to find it a stud, he will do the job himself… and give it “a right good seeing too”… eventually resulting in the birth of a deformed baby goat that transforms into a killer creature, preying on the entire family. 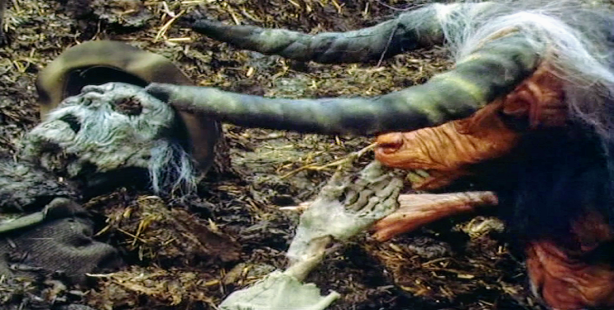 Yes, you read that right! A man has sex with a goat! It’s as silly as it sounds, but indeed so is the entire film. You see, the McDonalds are a funny bunch, essentially farting, burping, and eating their way through the 1 hour 27 minutes running time. And believe it or not, the goat sex scene is actually outdone by another featuring Gyles and his wife Greta, who go at it full tilt in the kitchen, complete with the now obligatory farting sounds and probably the grossest choice of a food condiment as lube you will see in any movie.

Aside from the low brow humour throughout, there is also a good quantity of gore and splatter on show, as Billy (the monster goat) kills off the family members one by one, with limbs and various body parts sent flying.

And speaking of Billy, the creature effects are actually very well done, considering the very low budget. Billy is born and starts life as a little rubber Ghoulie-like creature, before growing into a larger puppet and then into a full grown monster, which would put a lot of other similar movie monsters of the 90s to shame. Think of him as a cut price British Pumpkinhead if you will. 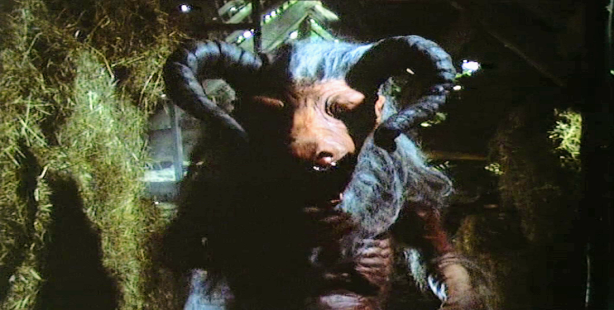 While I called this movie a “masterpiece” at the start of the review, of course it does still have its faults. For instance, some of the humour does fall flat, and I’m sure to a viewer outside of the UK you would be sat there uttering “what the fuck?” through a lot of it. Then there’s the fact that the young love interest in the movie, “Lance Allot” – who is in a relationship with Ronnie McDonald, the female of the McDonald’s 3 siblings (who are all named Ronald) – appears to be played by 2 different actors during the course of the film; a consequence of a 3 year schedule of shooting over weekends, according to Google.

So, to sum this up… Here is a British curiousity from the early 90’s that somehow appears to have been forgotten in time. And I’m not sure why, as it is definitely more entertaining than a lot of the direct-to-video dross I have watched in the years both before and after this one was released.

If you find yourself still reading this review at this point, then I recommend you check out Revenge of Billy the Kid this Halloween season and see what you think for yourselves. While fairly hard to come by now on VHS or DVD, the film is available via YouTube. I hope one day we will see a Blu Ray release to maybe get this film out there again amongst the horror crowd, where it might find a new audience.

Finally, I must say a big thank you to Dustin and Horror & Sons for allowing me to do a review each Halloween. It’s really something I’d never tried or thought of doing before, so I’m honoured he asked me for that very first year of Halloween Horrors… and every year since!