This is only the third entry in this year’s Halloween Horrors series, but it’s already the first entry from a returning contributor! Please welcome my friend, Roger Braden, back for a 2nd year! As you’ll hopefully remember, Roger made his HH debut during last year’s “Fiends, Freaks, and Final Girls” series with his look at Otis Firefly.

Since then, Roger has gone on to start his own Facebook page entitled Valley Nightmares, which focuses heavily on the history of the films that played, as well as those that were filmed in and around his home state of Kentucky. Roger has also made his debut contributions to Drive-In Asylum since our last Halloween Horrors series, so I fully expect to announce more projects that he’s got his fingers into during next year’s series.

For 2018’s series, Roger has claimed 1977’s action-packed thriller, The Car, starring James Brolin. Roger takes the approach of detailing his experience of first watching the film as a child, which is one that most contributors naturally lean towards. As childhood is when most of these films made their first (and lasting) impressions on us, it makes perfect sense that most of these articles take place in the past. Still kinda fun to picture someone you know grinning from ear to ear with childlike excitement and enthusiasm as they remember what is clearly a fond, unforgettable memory…. even if he wasn’t supposed to be watching the movie in the first damned place! I’m telling on you, bro! 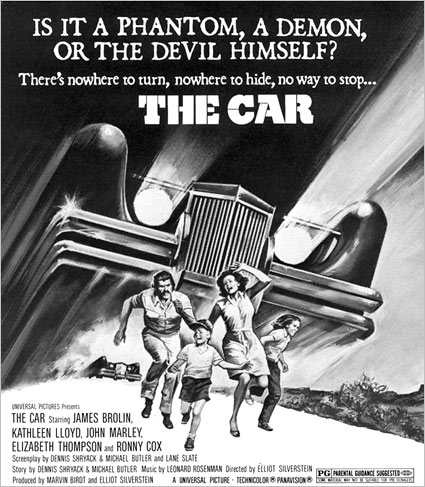 As a kid in the 1970’s, I was fortunate that my family and friends’ family loved going to the movies. We went to drive-ins mostly, watching comedies, “car” movies, and “shoot ’em ups”. By around 1976, our parents would rotate scooping up 2 or 3 of us older boys and drop us off at one of the local malls or movie theaters around town. In May of 1977, my parents took my buddy, “Rusty” Franklin, and I out to the sprawling Showcase Cinemas to see some movie and were told: “Do not see that Satanic Car movie!”

See, I had developed a real fear of all things “Satan”, which my parents didn’t understand. Unknown to them, an older cousin and his girlfriend had taken me to see The Exorcist opening weekend – when I was 10!  And I was still pretty fucked up from seeing that.

So, they leave, and we go about doing “unsupervised 13-year-old” shit. You know… candy, drinks, and pinball. And getting our tickets. The trailer for The Car was all over TV back then… and it looked awesome… and it was rated PG!! After some back and forth, Rusty convinces me, and we go get our tickets to see The Car. We grab our seats (centered, of course) in a half full theater, nervous and excited.. and then the lights go down. It’s Showtime!

That’s how it starts, then a basic “The Car” title screen. We slowly fade into a mountainous desert landscape as the opening credits roll. Slow, rhythmic “Satanic” music starts playing. As we fade into morning and the credits stop, we see something in the distance, moving fast and heading our way. Holy shit, you mean The Car is already alive?! And who the fuck is Anton LaVey? With barely time to think that, we’re taken to a mountain road where teenagers Susie and Pete are riding their bikes and having fun.  But we know “The Car” is on the same road, driving slow, as we get “point of view” shots looking through the reddish-tinted windshield. At barely 10 minutes in, we get an intense scene as “The Car” revs its engine and blasts its insane sounding horn before smashing Susie off the cliff side, then catching Pete and sending him over a bridge rail to the canyon floor below.

Then, we meet local lawman Wade (James Brolin) and his girlfriend Lauren (Kathleen Lloyd), just waking up at Wade’s house. School teacher Lauren has to sneak out because Wade’s daughters (Kim and Kyle Richards!) don’t know the extent of their relationship. We also meet a hitchhiker, trying to get a ride across the desert on a long dirt road near drunken, wife-beating, demolitions expert Otis’s (R.G. Armstrong) house. Otis tells the hitcher to “move on” and goes back inside. The wind picks up, headlights in the distance moving fast. But the vehicle flies past the hitcher, which pisses him off. So, he cusses at and flips off what passed him. Mistake. We see the rear tires slide to a stop on the dirt road and then start rolling backwards. Then, it speeds up and repeatedly runs over the hitcher as Otis watches from his upstairs window.

As Susie’s “accident” is discovered and the police find out about the hitcher, we meet tough talking Sheriff Everett (John Marley), who still loves Otis’s wife because “she was the first”. (WTF!); Deputy Luke (Ronny Cox), Wade’s best friend and 2 years sober now (or is he?); Deputy Denson (Eddie Little Sky), one of several Native Americans on the force; As well as several other police officers, as road blocks are put into place to find this maniac driver. Look… for a small town, Santa Ynez has a huge police force. Must be a lot of sinners living there, hmm?

As another person falls victim to the car, the mystery deepens. Witnesses barely remember anything about it, but an old Native American mentions an old legend and that “the car had no driver”. The Car finally makes its full appearance at the school as the children and others are practicing for a parade. As everyone starts running at the sound of The Car, it bursts from behind a row of tents and starts chasing everyone. It’s running down horses and cowboys, in a PG-friendly way, before people take refuge in an old cemetery. Despite Lauren hurling insults and cussing it, The Car can’t enter “hallowed ground”. 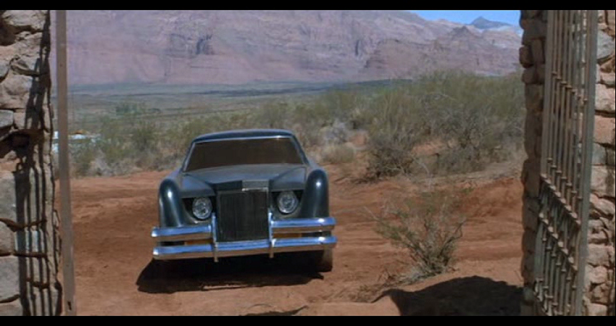 Hearing sirens, The Car speeds off and then it’s non-stop action. The police keep trying to stop or catch The Car, but it just outruns, tricks, and kills them. And nothing hurts The Car either. It gets shot point-blank, leaps through a house, and barrel rolls down the road. Doesn’t even get a scratch. However, the remaining cops and Otis have an explosive plan for The Car. As they are setting up, Otis says to a clumsy deputy: “Easy, easy now! You cough around these blasting caps and they’ll blow your balls up around your tonsils. Easy..“

Well, I lost it then and it still cracks me up! Even writing that made me laugh out loud. So, as Wade leads The Car into the trap, the plan seemingly works. But during the massive explosion, we “see” a demon’s face in the flames, and it sticks its tongue out at us! As the movie ends, our survivors debate whether they “saw” it. Wade assures us that it’s all over, it’s done.

But as the end credits roll, the background is filmed from underneath a vehicle as it cruises big cities and rural areas. Holy Hell, are there more cars?! Then, we fade to black as The Car sounds its horn one last time. Rusty and I were thrilled! We got to see an action-packed horror movie, with a lot of cussing, and one fantastic killer car. Now, we just had to not tell what we saw when my parents showed up. I don’t think we made it a mile down the road before my excitement caught up with me and I had to tell them. I explained that it was PG and that I wasn’t scared, but during my explanation, I blurted out my favorite line from the film. Yep, R.G. Armstrong’s line about blowing your balls up! The car went silent. But other than a talking to later about my language and what movies to see in the future, all was fine.

I have no idea how many times I’ve seen The Car, a couple hundred times at least. But when that opening title screen comes on with the quote from Anton LaVey, who I now know founded the Church of Satan, I can’t help but smile and think… There were more cars out there. We just didn’t get to see “their” story.