Does A Bear Star In Shitty Movies In The Woods?

Berserker is a 1987 film written and directed by Jefferson Richard, here credited as “Jef Richard”. Richard had served as a crew-member on numerous lower-budget, generally obscure films in a multitude of capacities dating back to the very early days of the 1970’s. Richard directed a couple of films before Berserker, but none worth mention here. However, Richard would later have a much more successful career in production, serving on films such as Maniac Cop and Gothika. Richard was also the executive producer of 2007’s Daddy Day Camp, arguably his most frightening film.

The film begins on the night of a full moon, sometime during the 10th Century. A viking warrior, known as a “berserker”, washes ashore upon his small sailing vessel. As the film is presumably set in or around Utah (where it was filmed), and the Vikings are said (in the film) to originate from Norway, it’s safe to assume that the Berserker knew absolutely nothing about navigation as I’m sure that a shorter route was available. Wearing a bear snout face mask that appears to have been freshly removed from its original owner, the Berserker spends the film’s opening moments growling at a bear.

The timeline shifts to the “modern-day”, which in this case would be the mid-1980s. An elderly couple is wrapping up a day of fishing at the stream that runs near their campsite. They gather their gear and make the hike back to their tent through the thick surrounding woods as the sun slowly sets on another day. Despite having camped in this area numerous times before, the couple lose their direction and stumble blindly into harm’s way. The couple are killed, seemingly mauled to death by a bear. This sequence may have been intended as a parody of On Golden Pond, but if so, it was probably overlooked by most viewers. That said, On Golden Pond would have been immeasurably more entertaining had Katherine Hepburn been attacked and devoured by wild animals.

We’re soon introduced to a group of young adult friends (possibly “teenagers”, but they all look to be in their mid-to-late 20’s) preparing to venture out for a weekend of camping, drinking, and premarital sex. The group is led by “Josh Winters” (actor Greg Dawson in his only film role, although IMDb does list him as having appeared in 10 episodes of The Adventures of Ozzie and Harriet), a brash, arrogant little fuck whose only possible redeeming quality is that he claims to be a “regular” at the campgrounds in which they will be staying. Otherwise, there is no discernible reason for the others to associate with him, which is frequently displayed in their annoyance with the character.

Included in this group are Josh’s pal Mike (Joseph Alan Johnson – Slumber Party Massacre, Iced), as well as Mike’s girlfriend, Shelley. Mike is clearly the “glue” keeping this group from falling apart, although he also seems to be more than a little tired of dealing with Josh’s immaturity and arrogance. “Shelley” is portrayed by actress Beth Toussaint, who is probably best remembered for her appearance on Star Trek: The Next Generation as “Ishara Yar”, sister of Denise Crosby’s ill-fated “Tasha Yar”. Toussaint also appeared as Christopher Lambert’s wife in 2000’s Fortress 2. 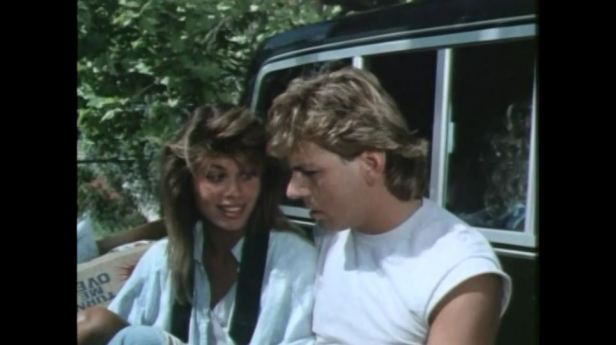 Filling out the ranks are Larry (future visual effects artist Rod Montague) and Kathy, a somewhat nerdier couple, as well as their highly apprehensive friend, Kristi. Larry brings along a book detailing the history of the Vikings’ settlement of the area, but otherwise, these characters add little substance to the film’s plot.

The gang finally hit the road, their journey set to one of the worst 80’s hair band soundtracks that I’ve ever had the misfortune of listening too. For Josh, the party begins the second he gets behind the wheel. He’s puffin’ dubes and slammin’ back cans of cheap American beer as he speeds down rural highways, tossin’ the empties out the window of his truck as he goes. Now, it’s generally a safe assumption that this website will never have any corporate sponsors or paid advertisements, but if it did, you can probably count out Miller Lite now that I’ve called that watered-down swill that they produce “cheap”.

One errant can draws the attention of a highway patrolman, played by cult cinema “jack of all trades” John Goff (Drive-In Massacre, The Alpha Incident). As expected, Josh scrambles to hide all of his illegal substances before being pulled over. The patrolman lets them off with a warning, but not before he notices Larry’s book. The officer recognizes the book as one that his cousin owns, despite the book having no clearly visible title or markings. 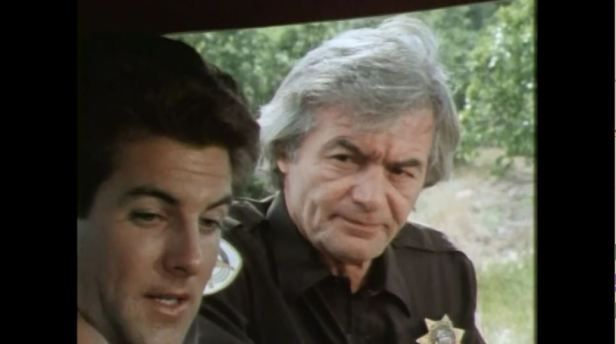 The kids continue on their way, reaching the campsite in short time. VERY short time. Like seconds. Upon reaching the campgrounds, they are greeted by the owner, Pappy Nyquist (another cult “do-it-all”, Buck Flower – They Live, The Fog). Maybe “greeted” is the wrong word as Pappy seems to have no memory of Josh, despite the boy’s claims of being a “regular”. Truth be told, Pappy clearly remembers Josh. He’s just never liked him. Unbeknownst to all of the kids, Pappy just so happens to be the cousin that the patrolman mentioned earlier.

Josh requests the “Sergeant’s” cabin, a frequent stay for he and his late estranged father in years past. However, his request is denied. Pappy informs him that due to his failing to make a reservation, the “Sergeant’s” cabin has already been rented to the elderly couple. Ya know, the dead ones. Pappy offers him another cabin, called the “Miller place”, but Josh protests, almost losing the group the right to stay at the campgrounds altogether. Much more rational and diplomatic than his volatile friend, Mike intervenes and graciously accepts Pappy’s offer. 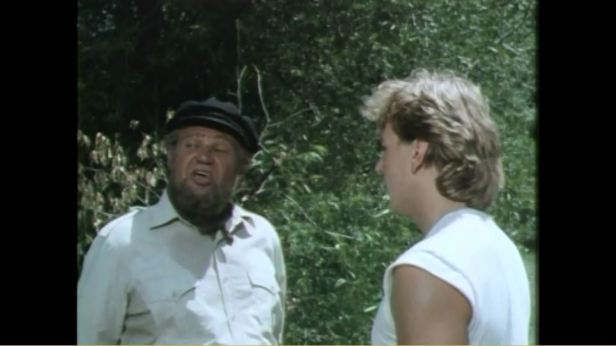 Despite Mike’s charisma saving the weekend mere moments earlier, Josh defiantly drives to the “Sergeant’s” cabin anyway. As they have never been there themselves, his friends are completely unaware of his ruse. The “Sergeant’s” cabin is a dilapidated, one-room, log structure, arguably no larger than a common maintenance shed. While it is never actually shown, judging from Josh’s adamant desire to stay at the “Sergeant’s” cabin, the “Miller place” might just be a mailbox.

After a long day of riding 4-wheelers, splashing in the nearby pond, and the guys homo-erotically pouring beer over each others’ shirtless chests, they end their day by ripping off a few better-made horror films of the 1980’s and gathering around the campfire to hear the legend of the guy that is eventually going to kill most of them.

As read from Larry’s book, the Berserker was a cannibalistic warrior used by the Vikings as the first weapon during invasions of rival territories. Adorned in bear furs and bloody masks cut directly from actual bear faces, the berserkers were uncontrollable and crazed, having to be chained and kept in cages until the time when their “special services” would be needed. The second wave of the assault would consist of finishing the surviving enemy forces, while also trying to recapture the Berserkers lest they turn their bloodlust on their own. 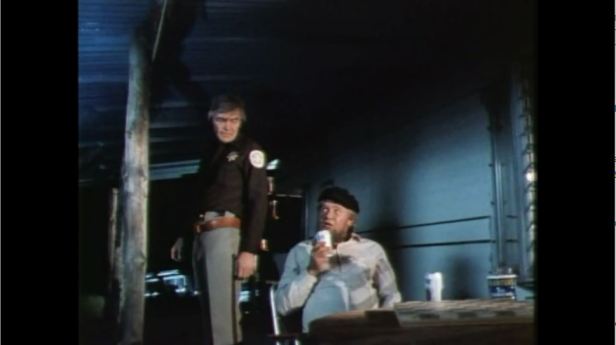 There’s a nice scene featuring a closer look at the relationship between Goff’s and Flower’s characters, but it ultimately doesn’t add much to the story. This leads into a sequence of the patrolman searching the vacant “Miller place” for the kids, but this also adds little to the film than padding for the runtime.

Soon after, one of the teens(?) is viciously attacked by “something” off-camera. The film does everything it can to convince you that the attacker was a bear, even going as far as showing an actual bear. However, as the film is called Berserker, and there was a recounting of the “Berserker legend” just minutes prior, it’s pretty safe to say that the killer is not a bear. Or maybe it is??? It’s not.

This leads to a few more “alleged” bear attacks, but very few people actually die from their wounds in this film. The low “kill count” and surprisingly tame gore will undoubtedly be a sizable disappointment to those expecting a typical 80’s slasher bloodbath. That said, it does feature some obligatory “gratuitous nudity” during a sex scene that is notably more intense than those found in more mainstream slashers of the era.

The Berserker finally appears, and unfortunately for viewers who may and should have expected more, he’s just a shirtless guy with a mullet wearing a bloody bear snout. Making his presence less impressive, the bear also returns at this time, seemingly pissed off about being accused of all the murdered white kids. This leads to a bear wrestling match, which is also less entertaining than one might hope, but just as one-sided as one should expect.

The film attempts to pull off a Scooby-Doo moment in the final minutes, but any viewer that was paying attention (and actually made it to the end of the film without slipping into a coma) probably won’t be surprised. Even then, they probably won’t care.

Berserker is surprisingly well-made and features respectable performances. It’s just very boring. There’s not much justification or logic in the attempts to confuse who or what is behind the killings, thus making the film seem unfocused. The film presents itself as a slasher film, but plays more like a 1970’s “nature run amok” film. In that case, you’d be better off watching Grizzly or Day of the Animals.

Berserker was released to VHS by Prism Entertainment. The film saw DVD releases in Europe, but none that I can find record of in the States. That’s okay. You probably aren’t missing much. To prove that point, I’ve included the full film, via YouTube.