For this review, we will be taking a look at a film produced by The Asylum.

And just like that, half of this site’s normal readership have disappeared.

For those unaware, The Asylum are a production studio responsible for over 100 lower-budget horror, sci-fi, and fantasy films (with a few action and comedy releases sprinkled in for good measure) over the last 20 years. They are hugely responsible for the creation of the term “mockbuster”, as most of these films tend to be shameless “clones” of major studio “summer blockbuster” releases, such as Snakes on a Train, Independents’ Day, and Atlantic Rim. Oh, and they also produced the Sharknado movies.

And just like that, half of the people who had stuck around are now gone.

Nazis At the Center of the Earth is a 2012 release directed by Joseph J. Lawson, a visual effects artist who has worked on a myriad of Asylum releases, as well as numerous other sci-fi, fantasy, and horror films and television series. Like most of The Asylum’s releases, Nazis was seemingly “inspired” by another then-current release, 2012’s Iron Sky. As nearly all of The Asylum’s releases tend to go, the film is just bursting at the seams with cringe-worthy CG and “green screen” effects

The film opens on an airfield located somewhere in WWII-era Germany. Dr. Josef Menegel (played by actor Christopher K. Johnson), the infamous Nazi physician dubbed “The Angel of Death” for his role in helping to choose who would be sentenced to death in the gas chambers of Auschwitz, as well as his rumored experiments on prisoners, is preparing to board a plane in an attempt to flee from American forces that are quickly advancing on his position. His men load the plane with multiple various pieces of machinery, including one particular contraption that almost resembles an old-fashioned pressure cooker.

The American troops arrive, most of whom look far too out of shape to have ever successfully completed basic training, and promptly wipe out most of the Nazi soldiers. Despite standing in one spot to have a conversation with another Nazi officer which lasts the majority of the assault, none of these soldiers are able to hit Menegel. The doctor, on the other hand, is able to wipe out the entire battalion with a Luger pistol before boarding his plane to freedom, which is already taxiing down the runway.

After some opening credits, the film then shifts to the present day. Here, we find a research team of doctors and scientists stationed at a small base somewhere in Antarctica. I’m not really sure if it was ever stated just what this team was sent to research, but I assure you, it’s not even remotely close to being important. The team is composed of generally disposable characters with only the thinnest of personality traits, but as they are the ones receiving “top-billing”, I guess that I should focus on the film’s 2 biggest “stars”: Dominique Swain and Jake Busey.

Swain (Face/Off, Lolita) stars as “Dr. Paige Morgan”, a member of the expedition, as well as the love interest of the team’s director, Dr. Moss (Josh Allen – Shark Week, Age of Dinosaurs). While out drilling with another member of the team, Paige’s drill hits the frame of an old Luftwaffe bomber buried, seemingly just a few inches, beneath the surface. Within seconds of striking metal, Paige and her teammate are abducted by Nazi soldiers attired in fatigues and gas masks.

Busey (Starship Troopers, The Hitcher II) stars as “Dr. Adrian Riestad”, the team’s head researcher. Riestad serves almost as a teacher for the group, filling them in on everything that he has learned while being stationed in Antarctica for the last 10 years. Riestad is being chastised by Moss for keeping a dangerous virus specimen in the labs when they are notified of Paige’s disappearance. Sure, that other guy is missing too, but no one really cares about him. 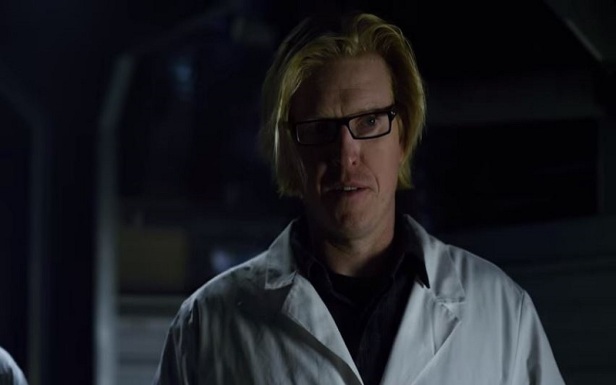 Riestad and Moss set out to find their missing crewmates. For some highly illogical reason, they decide to take every single member of the team out with them. Upon reaching the drill site, they find multiple footprints trailing off into the distance. Now, I initially questioned how the footprints weren’t at least partially covered in snow by the time the crew arrived, but as the Nazi plane had only been covered by a few inches of snow in the nearly 70 years since it landed, I’ll assume that it’s actually quite feasible…. or something.

Following the trail in the snow, the team find a large underground tunnel carved into the ice. This eventually leads them to the discovery of a subterranean world, one oddly complete with its own source of sunlight. Unbeknownst to them, as of yet, is that this land is now home to a resurgent Nazi force, led by none other than a still-living Menegel. Here, the mad doctor has carried on his experiments unchecked for decades, continuing up even until today with Paige’s unfortunate teammate as the latest guinea pig.

Still searching for their friends in this newly discovered kingdom, Moss, Riestad, and the rest are themselves soon surrounded by Nazi soldiers and taken captive. As if the discovery of a world buried within our own, as well as the discovery of a still existent Third Reich, weren’t enough of a surprise, the crew are doubly (triply?) shocked to discover that they had been set up by one of their own the entire time.

As most cinematic villains are prone to do, Menegel overly explains every detail of not only how he and his men survived through transplantation of slowly decaying stolen body parts that leaves them as little more than intelligent zombies, but also their forthcoming plans for world domination.

Menegel informs the researchers that they will now be forced to assist the Nazis with their experiments or will be killed. As if to prove his point, Paige is brought out to join him, now seemingly forced to work by Menegel’s side. Menegel then vaporizes the Jewish member of the team, if only to remind the audience that he is, after all, an evil Nazi bastard.

In spite of his own ultimatum, Menegel quickly kills off most of the cast anyway. See? I told you that they weren’t important. That is, unless you count the numerous gruesome ways in which they are dispatched. These deaths include an implied rape-then-cannibalization by zombies, as well as one member having their brain ripped out of their head and smashed on the floor. Hell, there’s even a vacuum-powered abortion. I guess that counts as a “crew member”.

Normally, the following segments of this review would constitute what would normally be classified as a “spoiler”. Quite frankly, I don’t give a shit. After almost 4 years of writing these reviews for you, I now consider myself your friend… whether you like it or not. And as your friend, I feel that I would be doing you a great disservice if I allowed you to watch this film without first giving you a fair warning. Hell, I might even be saving your life tonight. Did those fucking Nazis ever do that for you? No! Only me…. and Elton John.

From this point forward, Nazis At the Center of the Earth becomes a bizarre mix of They Saved Hitler’s Brain and The Iron Giant. The severed head of Adolph Hitler is revealed to be alive and…. well, alive in the machine featured in the film’s opening sequence. In a directional decision that elicited more laughs than it probably should, the head alternates between that of an actor of only moderate resemblance and a CG recreation that rivals the quality found in the cinematic sequences of a Playstation 1 game.

Despite being praise-worthy for its ineptitude, even Robo-Hitler can’t keep Nazis at the Center of the Earth from being something of a yawner. The majority of the characters are thinly developed and forgettable, while Swain seems to be struggling to deliver her lines with any conviction. Granted, she’s not being given much to work with. Busey, however, appears to be having some fun with the role, yet his character still comes off as quite one-dimensional.

Nazis is far from The Asylum’s best film, but it’s also far from their worst. It’s doesn’t really matter on which side of the fence you are on when it comes to The Asylum’s films. In the middle is not a great place to sit.

Visit the Horror And Sons’ Recommendations Page on Amazon at https://www.amazon.com/shop/horrorandsons, but please, don’t buy the movie!!!!