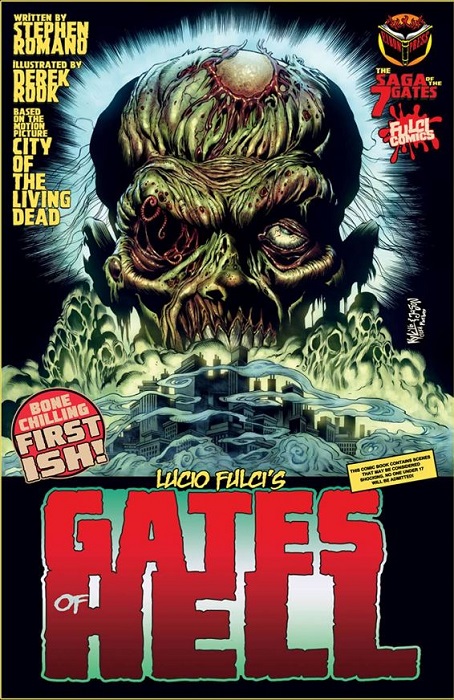 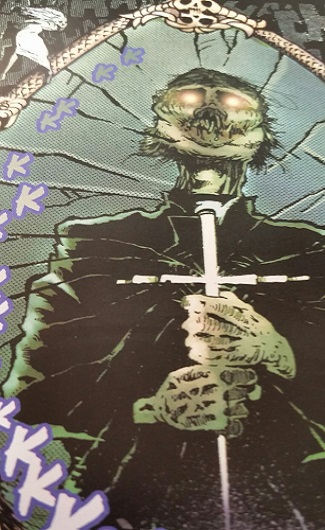 After releasing 4 successful issues of their Zombie comic series, Eibon Press/Fulci Comics are now expanding to tackle further adaptations of Lucio Fulci’s more popular films, starting with 1980’s City of the Living Dead. Of course, City of the Living Dead may be just as well-known under its alternate title, The Gates of Hell.

Please note: As the 1st issue (and if Zombie is the example to follow, the next few issues as well) of the comic version of Gates of Hell follows pretty much the exact same plotline as the film version, this review will contain “spoilers” for those unfamiliar with the film. Then again, the film is almost 40 years old, so you’ve had more than enough time to see it by now. Slack ass.

Much like the previously mentioned Zombie series, Gates of Hell begins right where the film that it is based on also began: the cemetery in the cursed city of Dunwich. Actually, the comic begins in the chamber room where Mary Woodhouse (portrayed by Catriona MacColl) first has her vision of ill-fated Father William, just seconds before the priest hangs himself. This somehow causes the gates of Hell to open, allowing the dead to rise from their graves. And as anyone who has ever seen a zombie movie can tell you, the dead rising from their grave never leads to fun times. Well, not for the characters in those films, anyway.

As in the film, Mary’s vision puts her into a state of catatonia that those around her mistake for her death. Or maybe she’s actually dead and just resurrects. Not important. Or is it? Nah.

Multiple police officers and one hard-nosed, yet oblivious, detective arrive at Mary’s apartment, trying to determine what “really” killed her, all the while believing it to be nothing more than an overdose from some “heavy shit”. We get a brief introduction to reporter Peter Bell, the role played in the film by the late Christopher George, but the character will be further developed when he resurfaces a few pages later. Fans of the film will undoubtedly notice that some liberties have already been taken with the characters during this scene, most notably in the physical appearance of Father William, who now has a zombified visage. This makes the character much more aesthetically evil, but also removes any sense of humanity. Also of note is the gut-bursting immolation of a non-essential character, something that most assured does not take place in the film.

From here, the issue focuses on introducing the primary characters in pretty much the same order and in the same situations as they first appeared in the film. However, while the Zombie series took some subtle liberties creating brief backstories and marginally broadened personality traits for its characters, Gates of Hell takes some major chances by trying to fill in plotholes or by vastly expanding upon minor scenes. This is evident from the first page as the story opens by exposing a much deeper depth of madness for Father William, here called Deacon William. Let’s just say that it is drastic enough to possibly upset those steadfast in their belief that “less is more”. Then again, there’s also solid argument that without more explanation, a lot of City of the Living Dead just doesn’t make a lot of damned sense. 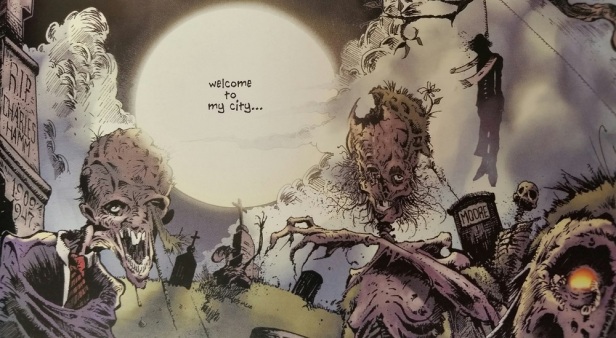 As their fans already know, MacColl starred in Fulci’s “Gates of Hell” trilogy, which consists of this film, The Beyond, and House by the Cemetery. The comic, however, puts forth the concept that all 3 of these women are interconnected in ways that I won’t further divulge here. Personally, I found this idea to be quite intriguing. I’m very much looking forward to seeing what writer Stephen Romano and crew have in store for these characters in the next few issues, as well as their planned series on House and The Beyond.

Compared to the Zombie series, which is bright and awash in hues of orange and red to fit its island setting, Derek Rook’s artstyle for Gates is much more dark and grim. While carrying the same expected level of grue, I found the artwork style here to be much more representative of what I would expect for Doomsday.

The issue closes with a looking at the making of the issue, as well as the version released years prior that most people unfortunately never saw.

As usual, the issue comes in signed and unsigned versions, both carrying varying amounts of swag. 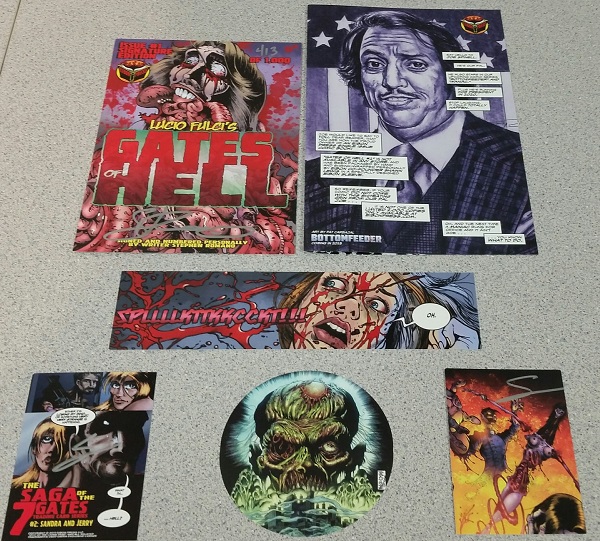 Once again, Eibon Press has taken my money. And once again, I’m a satisfied customer.

NEW REVIEW!
Newest Review.... from a couple days ago.
A review for a 2001 film starring Mario Lopez and Gary Busey? We're not happy about it either!!
NEW REVIEW!
Random crap that I never deleted from my phone. This was from last Halloween.
NEW POST!