Bernie Wrightson was undoubtedly one of the most successful and innovative artists to ever grace the medium of comic art, and in particular, horror art. His works were praised by both critics and fans alike, and garnered Wrightson numerous awards, such as the Shazam Award (for Best Penciller and Best Individual Story for Swamp Thing), the Comic Fan Art Award, the H.P. Lovecraft Award, the Bob Clampett Humanitarian Award, and the Inkwell Special Recognition Award during his 45+ year career.

Wrightson first broke into comics with 1969’s House of Mystery issue 179. Arguably best remembered for his early work on DC’s Swamp Thing series, a character he co-created with Len Wein in 1971, Wrightson would later contribute artwork to 70’s era horror comics such as Tower of Shadows, Chamber of Darkness, Weird Mystery Tales, House of Secrets, and many more. He also contributed art to a number of super hero titles such as Captain Marvel, The Punisher, and Green Lantern. Horror fans may also remember that Wrightson provided the art for the comic adaptation of George Romero and Stephen King’s Creepshow, as well as King’s “Cycle of the Werewolf” novella.

Released by FPG, Inc. in 1993, Bernie Wrightson: Master of the Macabre Trading Cards were a 90 card series featuring a collection of characters and scenes illustrated by Wrightson. This card series features a wide selection of monsters and maniacs, more than a few iterations of Swamp Thing and Frankenstein’s Monster, and a couple of creatures that could easily be kin to the Aliens series’ Xenomorphs. Cards were available in complete sets as well as in foil packs containing 10 cards. Each sealed box of foil packs contained 36 packs. After selling quite successfully, a second series entitled More Macabre was released in 1994.

As with the Mike Ploog trading cards (also released by FPG), Bernie Wrightson: Master of the Macabre Trading Cards packs featured their own “chase cards”. Series 1 featured “Horrific Hologram” cards, as well as the more desirable autographed cards. Series 2 was no exception, also including autographed cards and “Metallic Sternn” cards, a nod to the “Captain Sternn” character that Wrightson created for Heavy Metal. Captain Sternn also saw the release of a short-lived comic series right around the same time as the second card set, so there was an obvious “tie-in” to be exploited.

Just like the Ploog cards,  it’s a safe bet that you’ll pull at least 1 or 2 foil cards from a sealed 36-pack box. Once again, I do not know what the odds of finding an autographed card would be. As these cards have also been available for over 20 years, the odds of finding an autographed card are undoubtedly much less now than they were at release. Seeing as I come across significantly more signed Wrightson cards on eBay than I do Ploog signed cards, I will make the assumption that the Wrightson cards will be much harder to find in packs than the Ploog autographed cards.

As with the majority of FPG’s releases, the cards feature a heavy gloss coating. While this definitely adds some “pop” to the paintings featured on them, it does also cause the cards to marginally stick to each other, particularly in still sealed packs. That said, you should be able to separate stuck cards with minimal effort and likely no damage to the cards. Card backs feature a brief  description of the scene or character displayed on the card’s front. The black backings and orange lettering on the backs are a real eye-catcher.

Sealed boxes usually range from $20-$23 on auction sites like eBay, while (collector compiled) complete sets sell for $7-$9, although these usually do not include any of the “Chase Cards”. Unlike most of the other card sets that I’ve previously reviewed, completing a set with cards pulled from packs took significantly less time and opened packs than normal. For this set, I was able to complete a set opening only 14 of the 36 packs included in the purchased sealed box.  From those packs, 2 Metallic Sternn cards were pulled, but no autographed cards. The 22 remaining packs will be used for future Horror And Sons giveaways (with 1 pack already given away).

Sadly, Bernie Wrightson passed away on March 18th, 2017 after losing his battle with brain cancer. While the cards used for this review were purchased a couple of weeks prior, it wasn’t until March 19th that I started writing this review. I spent the 18th with the full intention of working on the review while at my office the next day. To help hype up the piece, I had given away a sealed pack of cards on the 18th. It was actually the winner of that giveaway that broke the news to me.

Wrightson’s influence on generations of both comic and horror fans was immediately evident from the outpouring of love and admiration that flooded the internet and social media sites. He will be deeply missed for quite some time. 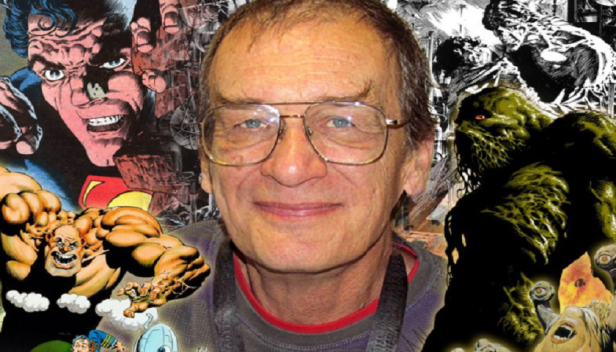 NEW REVIEW! We're checking out @thefilmdetective upcoming blu-ray of "Hercules and the Captive Women".
Posted a new review of 2006's "The Woods" a couple days back... And forgot to share the link. Oops!
From Halloween 2018, I believe
NEW REVIEW!
NEW REVIEW!
I 've said that I've been wanting to write a "look back" at this game, but I think I'm actually about to finally start it.