Our next Halloween Horrors entry comes to us courtesy of Rob Lozak.

I consider Rob a “friend”, even if I hardly ever see the guy. So, I must admit, it caught me by surprise when he announced his decision to throw his hat into the ring. That said, he definitely chose the film that I had hoped that he would for his submission.

The “topic” of this piece is the 1981 slasher spoof, Student Bodies. While not a film that you might normally associate with the Halloween season, Rob shares with us a specific memory that he associates with the holiday. It shows that we all look at Halloween differently, and for some of us, it’s not necessarily about neighborhoods full of costumed kids, moonlit cornfields, old fog-shrouded graveyards, or some of the other customary trappings of the what is normally considered “Halloween viewing”.

When I was around 14 or 15 years old, Halloween fell on a weekend. Since I was too old to go trick-or-treating, and I was not nearly cool enough to be invited to a Halloween party, I spent my evening doing what any red-blooded male would do in a similar situation –  channel surfing through the premium cable stations looking for some spank material.  Cinemax wasn’t showing their usual softcore European porn/sex comedies until very late in the evening, but HBO had a horror movie called Student Bodies playing at a more reasonable hour. I’d never heard of it, but horror movies of the era were always good for at least a few bare boobs, so I figured it would be worth the watch.  It turns out the movie was more than worth the watch, and has actually become one of my favorite films, although SPOILER ALERT: There is nothing worth jerking off to in this movie.

Unbeknownst to me, and apparently whoever classified the movies for our local TV guide, Student Bodies is a comedy rather than a horror movie.  Released in 1981, it’s a parody of the slasher subgenre that had quickly risen to prominence starting with John Carpenter’s Halloween, and it features all of the delightful tropes that were so quickly put into place.  Adults and police are ineffective and ignorant to the truth, teenagers having sex equals death, virgins and nerds are the only ones to figure out what’s going on, and all the other things we’ve come to love from slasher films.  It’s not on the level of Blazing Saddles or Airplane, but the jokes hit more than they miss, and there are some amazing laugh-out-loud jokes in it.

Student Bodies introduces us to a slasher of its’ own who is every bit as lethal as Jason or Michael Myers… the Breather.  He just happens to be a little more handicapped.  As he stalks his teenage prey, the Breather fully lives up to his name by breathing loudly and quickly enough to the point where he just about hyperventilates.  All the while, he monologues to himself and lets you in on the things serial killers wonder about.  “Why do I wear galoshes? Why are the girls I chase always on the track team?” and so on.  It certainly makes him more related and human than many of his contemporaries. Okay, that’s a load of crap. It does however make for a lot of good schlocky humor.

Aside from the Breather, Student Bodies gives us plenty of other laughs while it mocks the classic theme of horny teenagers getting killed for the unspeakable sin of intercourse.  Wooden horse head bookends are elevated to man’s highest cultural and artistic achievement.  Rubber chickens are used to disguise voices.  A special message from the producers of the film is included to discuss the importance of an R rating for a film to achieve financial success.  Best of all, there is Malvert the retarded janitor. Malvert, played by a comic named “The Stick” who resembles a stork with a mustache, steals every scene he’s in.  He may however permanently turn you off to fruit punch. 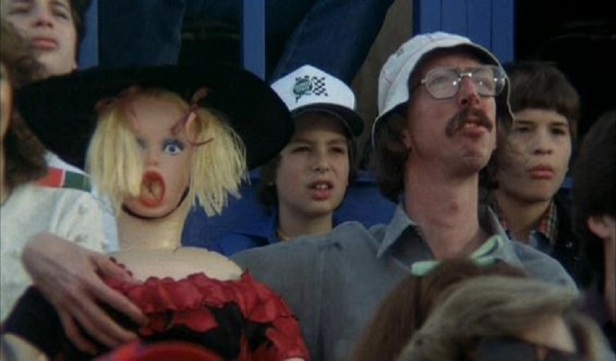 These days, Student Bodies is one of my go-to movies to show to friends when they ask for a sleeper recommendation, particularly once Halloween rolls around.  It’s a nice change of pace from the typical horror movies that most people tend to watch once October 1st hits.  And unlike more recent horror parodies like Scary Movie or A Haunted House, it tells its own story rather than trying to just string together a movie made up of scenes that directly spoof other contemporary movies.  In fact, had they taken out the jokes and just played it straight it would have passed for any of the other generic slashers of the early 80’s. At any rate, I love it and I don’t hesitate to recommend it to friends. However, I do usually leave out the reason how I came to discover the movie in the first place.