2nd Printings Will Soon Be Available at www.eibonpress.com

On June 10th, 2016, Fulci Comics (a sub-label of Eibon Press) made available for pre-order a new (kinda) comic based on Lucio Fulci’s 1979 undead opus, Zombie (aka Zombie Flesh Eaters). 1,250 copies were printed, each coming sealed in a sleek collector’s sleeve featuring an interpretation from artist Michael Broom of the film’s iconic poster image, as made famous by actor Ottaviano Dell’Acqua. Of those 1,250 copies printed, 250 were signed and numbered by the comic’s author, Stephen Romano.

Eibon Press put a lot of steam behind their promotion of this release, with well-known horror sites such as Dread Central providing early write-ups and “reveals” to help pique the target audience’s appetite for blood and grue. As expected, multiple smaller outlets such as the often-overlooked Horror And Sons, took part in helping share posts and updates in the hopes of spreading the word to the fans. Not that there was much help needed in that department. Oh, who am I kidding? I just really wanted one of the bitches for my own. That’s why I bought 2.

Seemingly much to the surprise of the creators, all 1,250 copies sold out within 24 hours. While that in itself is quite an impressive feat, what makes this even more of a “pretty big deal” is that the comic was available only through Eibon Press’s website. This independently produced work of comic art was such a success that there were inevitable complaints about limited supply, even though the total that would be produced was listed multiple times in the company’s Facebook posts, as well as on their website.

This was soon followed by more complaints from illiterate folks that did not bother to read the multiple large print listings on the website that stated that this was a pre-order and were now disappointed that they would have to wait to receive this comic book (which thankfully was loaded with pretty pictures of severed jaws and dead babies) since it now seemed likely that reading the damned thing could be a struggle for them. I’m making the assumption that those same people will be unable to read this review, despite my largely monosyllabic vocabulary.

As for the actual comic itself?

While staying fairly adhered to the plot of the film, the comic does take a few minor liberties with this story that countless horror fans know by heart. The comic starts with a monologue from “Dr. Menard”, portrayed in the film by the superb Richard Johnson, recapping a voodoo ritual held by the island’s natives prior to the beginning of the film. These “previously unseen” events serve as the catalyst for the undead uprising that is the simplified plot of the film. This is followed by a brief recounting of those first returned, before sailing (pun intended) right into the opening moments of the film, Johnson’s memorable line about the boat being ready for departure included.

Just like the film, the comic then shifts focus onto the Harbor Patrol officers boarding the sailboat that is now floating derelict into New York. While the events here unfurl just as they do in the film, there is now some marginal insight into the mentality and thoughts of these characters, which serves to make them more than just zombie fodder without changing any of what we already have come to know about them in the 36-37 years since the film’s release.

The comic continues this pattern of expanding upon what we already consider “established” with the characters. Their behaviors and actions do not see major changes, which should please the more ardent fans. As the plans are to make this a continuing series that will take the story past the closing moments of the film, it’s a given that characters would need to be expanded upon in order to create new tales and adventures. The first issue wraps up as our heroes prepare to board the boat for their fateful trip to the island of Matool. 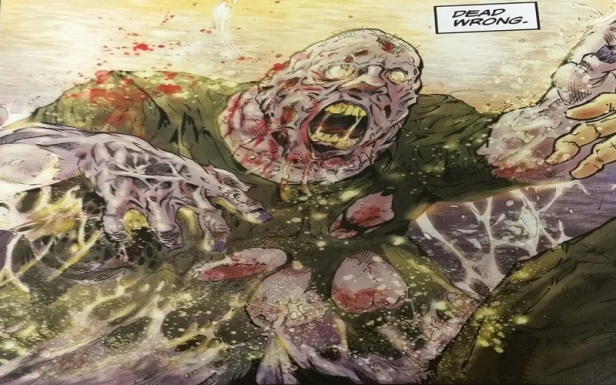 The book ends with a look back from Romano at the comic’s history, as well as the events that led to this current release. The reason that I said that this is “kinda” new is that this same issue was originally released in 2000. That comic only had 700 copies printed. In these day of rabid collectors leading to pilfering dealers, it’s no surprise that the book now sells for some serious cash on the auction sites. Presented here is a colorized version of that book, albeit with some touch-ups to art, lettering, inking, and borders. The pages have a nice gloss to them, but not to the extremes often taken by current publishers which leaves the artwork looking like a computer generated image and not the creation of an artist’s fingers.

As if the low quantity and Fucli’s “brand recognition” were not enough of an incentive to purchase the issue, the creators were clever enough to appeal to the sensibilities of collectors by including stickers, a flyer, a bumper sticker, and (for those lucky enough to get a limited edition signed copy) even a mini print signed by Romano. While not necessarily high-end collectibles themselves (excluding the signed prints), these add-ons made what was a nice collector’s piece into more of a “must-have” for Fulci fans and comic collectors alike.

Just in case anyone was curious, #73 of the 250 signed limited edition copies was the one used for this review.