On November 24th, 2020, The Film Detective proudly released a 4K restoration of 1971’s The Other Side of Madness, the first cinematic depiction of the Manson Family and their “Helter Skelter” murders, still widely considered one of the most shocking and sensationalistic crimes of our era. This restoration is available on DVD or limited-edition (1,500 copies) blu-ray. Also available, and limited to 2,000 copies, is a CD soundtrack to the film, which features 2 songs written and performed by Charles Manson.

Produced by Wade Williams (“The Haunted World of Edward D. Wood Jr.”, “Midnight Movie Massacre”), The Other Side of Madness was filmed shortly after the murders occurred, while the Manson trial was actually still in progress, and even includes footage shot at the infamous Spahn Ranch before it was destroyed by fire (although parts of the film were also shot in Kansas City). The film is even reported to have been banned in Los Angeles for a time. Surely, these are all elements that would normally intrigue those fascinated by the study of true crime and murder, particularly this specific case.

Unfortunately, I am not one of those people. I am undoubtedly not the target audience for this release. My wife, however, frequently binge watches ID and other “true crime” television programming, has read countless books on the subject, and has seen damned near every film and documentary on the Manson Family murders EXCEPT The Other Side of Madness, and therefore was closer to that “target demographic” than myself. Why not let her write this review as she most certainly knew the subject significantly more than I did. So, that’s what happened. Here’s Mandi with her thoughts on The Other Side of Madness. I’ll share my own thoughts after. 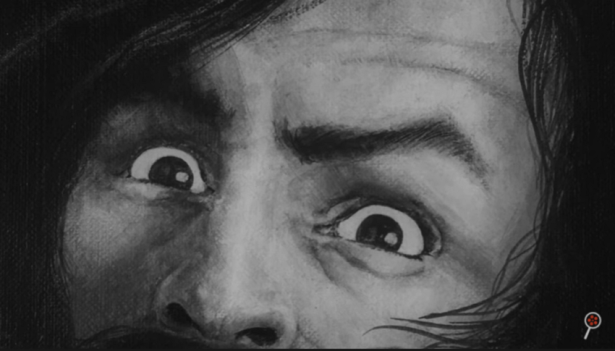 I have been fascinated, even obsessed at times, by true crime since a very young age.  When Small Sacrifices was aired as a made-for-TV movie in 1989, I watched with my Mom.  I was 11 years old, and I was horribly captivated and purely shocked that this was a true story of a Mother who attempted to murder her three children, successfully killing one of them.  When I realized that the movie was based on a true-crime novel of the same title, I HAD to read it.  I did, and as they always say, the book was far better than the movie.  What I did not realize at the time is that this would be the beginning of a lifelong fascination with these types of stories, and in particular, mass murderers and serial killers.

The second book of this genre that I dove into was Helter Skelter.  I had no idea who Charles Manson was before then.  The book was written by the prosecuting attorney at his trial, Vincent Bugliosi.  It was extremely well written, and the events that took place over that period of time in 1969 were shocking, to say the least.  I would read the book again in my adulthood, along with several other books about the Manson family and the crimes.  I would watch countless documentaries and interviews over the years as well.  Even though the events took place more than fifty years ago, and I know just about everything there is to possibly know about the story, my interest never wanes.

So, when I was asked by Horror and Sons to review this newly released Blu-ray of The Other Side of Madness, I jumped at the chance.  The movie was made in 1971, stars Brian Klinknett as Manson, and is directed by Frank Howard.  I thought it odd that I had never heard of this movie until this new release. I was excited to see a different take on the story, and especially one that was originally released very shortly after the crimes took place.

The Other Side of Madness opens with cinematography of some of the Los Angeles freeways, and then goes to what appears to be the county jail.  It shows the girls, and then Charles Manson.  Where the film goes next is what ultimately ruined it for me, but this was due to what my initial expectations were and my own personal convictions.  Let me explain.

I was anticipating a movie that would showcase ‘the family’ and how they came to plan out their heinous acts, and then the capture and trial of the group.  I was hoping that it would be factual, and that maybe I would learn at least one thing that I did not know before.  What I got was a movie that focused  75% of its run time highlighting the far extremes of hippie culture, and 25% showing us the execution of the Tate murders only, and really nothing of Leno and Rosemary LaBianca. 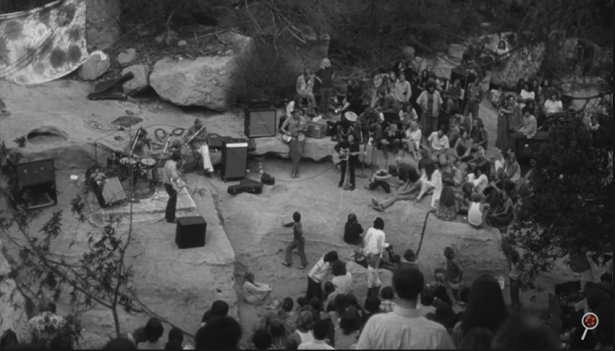 While I fully understand that Manson’s followers were lost souls, lacking self-esteem, using LSD and other sorts of drugs to elicit some sort of euphoric being and believing that Manson was Christ, I was not interested in seeing their behavior glorified for minutes on-end.  The film spends an inordinate amount of time showcasing ‘free love’, music (some of which is Manson’s own, lyrics and vocals), and partying.  One does not get the feeling that this is being shown to damn the lifestyle, but to celebrate it.

This feeling only intensifies when we watch a long scene later on where the actress portraying Sharon Tate is dancing at a grand ball, seemingly attended by royalty.  There is almost a feeling that the filmmaker is actually trying to justify what happens to Tate and her friends due to money and social status, holding down ‘the man’, which was the real motive behind Manson’s actions.  The fact that the movie was shot in black and white, with the exception of this ballroom scene with Tate (which is shown in color), is just further symbolism of that point, in my opinion.

The only redeeming quality of the movie is the Blu-ray itself.  This release by The Film Detective is miles better than other versions, which I watched afterward to give a comparison.  The images are hugely cleaned up.  The Film Detective did a fantastic job of restoration.  However, If you are a person who has an avid interest in Manson and his clan of followers and want to watch this film solely for the content, do not waste your time.  It is almost insulting to the memories of Steven Parent, Sharon Tate, Jay Sebring, Abigail Folger, Voytek Frykowski, and Leno and Rosemary LaBianca.  Unless you are an aficionado of the technical aspects of older movies being transferred and restored, I would pass on this one.

While I won’t go quite as my wife did in her final thoughts, I too shared in her overall disappointment with the film’s decision to focus more on hippie culture than on the Manson Family, their victims, or the actual crime. That’s not to say that the film obits the heinous act. It’s definitely there, and surprisingly brutal in nature (albeit not quite as brutal as the actual murders), but almost feels rushed. Just as confusing is the film’s final condemnation of the same culture that it has been (albeit unintentionally) glamourizing. There’s solid argument that the filmmakers did more to hurt their cause than further it.

While I have not watched other copies of The Other Side of Madness to give a fair critique of the restoration, the HD presentation found on The Film Detective’s blu-ray release is really quite impressive. The film is free from damage and blemishes, yet still looks sharp with retaining the look of film. If you’ve just been longing to see some unwashed hippie ass in high-definition, The Other Side of Madness has you covered, you patchouli-drenched freak.

Overall, The Other Side of Madness is a hard one to recommend, namely because I’m not sure whom to recommend it to. Those looking for more insight or history on Manson and his followers will be left wanting. Those looking for an in-depth depiction of the crime will also be disappointed. Quite frankly, the only people that I can safely recommend the film to are those wanting a look at hippie and drug culture of the late 1960’s Los Angeles and/or fans and collectors of obscure film, particularly those that serve as time capsules of their era. Honestly, the bonus CD may be the more appealing release for those interested in the subject of Charlie Manson.