It just wouldn’t be Halloween without Elvira. Don’t believe me? How else do you explain 3 appearances by the Mistress of the Dark in this year’s series? When it comes to Halloween, the woman gets around. From commercials to TV specials to movies to amusement park appearances to music videos, she’s done it all and still finds new avenues in which to be seen.

So, it’s only fitting that as Halloween Horrors 2020 sees its final days, that Elvira should appear in not one, but two posts to help close out the series. Enter longtime friend of the site and original Halloween Horrors contributor Dr. Jose of Camera Viscera to provide the first of those spotlights. Having been a part of the Halloween series since the first year, I always look forward to having Doc provide his insight each October.

Well, enough delay from me. Here’s Doc, and Elvira, with a look back at Elvira’s Halloween Special! 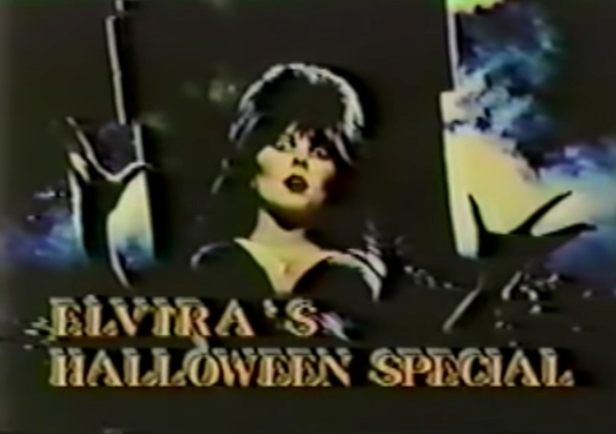 While I don’t remember the exact moment I discovered Elvira (sometime in the late ’80s, most likely), I do know that I was immediately hooked on her Valley girl-meets-Morticia Addams schtick, and have been obsessed with her ever since. Whether she’s hocking Coors Light and Mug Root Beer, or cracking jokes about her enormous, er, personality, she’s just so undeniably watchable.

Elvira is, of course, an alter-ego played by the talented and hilarious Cassandra Peterson. Peterson got her start as a traveling showgirl in the late ’60s, with dancing being her main career through the ’70s. (She occasionally did some film extra work at this time. As? You guessed it! A dancer!) However, it wasn’t until 1979, when Peterson joined Los Angeles improv troupe The Groundlings, that the seeds would be planted for her future career as a horror hostess. It was here, at the Groundlings, that she developed her valley girl character upon which Elvira is based.

As fate would have it, just two years later, Larry Vincent, aka Sinister Seymour, host of the Los Angeles-based weekend horror show Fright Night, passed away, and producers started looking for a replacement. Cassandra went to an audition, beat out 200+ other people, and took over as the host of Elvira’s Movie Macabre. And the rest is history! 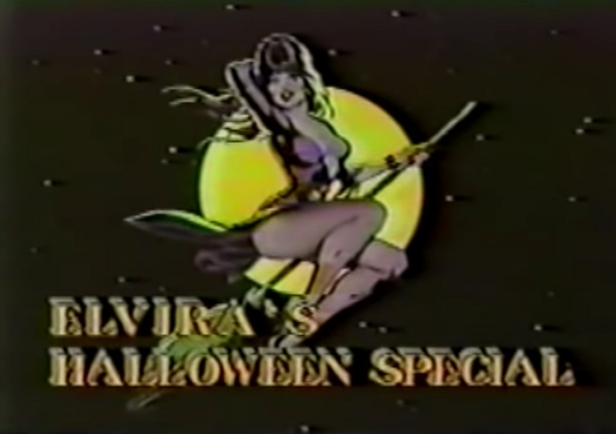 Which brings us to our topic: Elvira’s Halloween Special!

The special aired on MTV in 1986, smack-dab in the middle of Elvira-mania, and the same year that Movie Macabre ended ended its five season run. By this point, Elvira was everywhere: Halloween costumes, commercials, and even pinball machines! She was young, fresh, hip, weird, – perfect for MTV, basically.

This wasn’t Elvira’s first time on MTV, though. Two years earlier, she’d hosted Elvira’s MTV Halloween Party on the music channel. For six hours, she showed movies, music videos, and, of course, several sketches tinged with her signature air-headed humor. Guests included John Carradine, Cheech (Marin), Mark Mothersbaugh, and John “Jambi” Paragon. It would set the stage for what was to come a few years later.

Elvira’s Halloween Special in 1986 ran much the same way, featuring movies, music videos, and sketches. The main difference was that this one was filmed in Salem, Massachusetts during October. Throughout the episode, Elvira takes to the streets to interview the people of Salem about all things Halloween. She occasionally breaks character and genuinely laughs at some of the people’s reactions, and it’s very endearing. 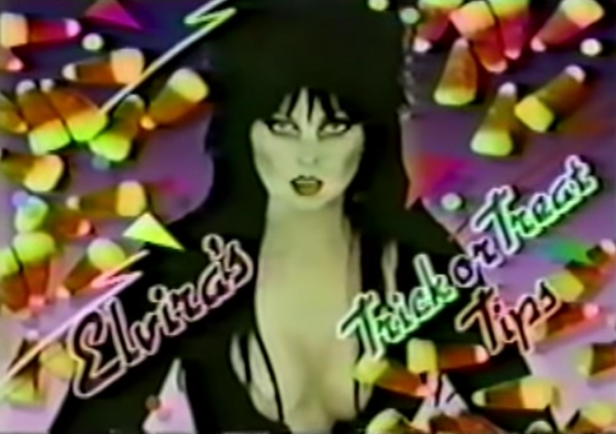 One of the recurring skits is “Elvira’s Trick or Treat Tips”, wherein Elvira offers you advice on how to have the best Halloween – like making sure you don’t use a floral sheet if you go dressed as a ghost, and how Rolexes make for good treats, but baked beans make for bad ones.

There are a few commercial and TV show parodies: Salem State College of Witchcraft and Voodoo (“Call now!”), The $25,000 Pentagram (wherein Elvira can’t name a single Scott Baio movie), and “Exorcising with Elvira”, which plays like a precursor to both Linnea Quigley’s Horror Workout and the “Exorcisist” commercial from Stay Tuned!

The one I enjoyed most is perhaps the commercial for the fake LP, “Elvira’s All-Time Favorite Halloween Carols”, which features several songs sung to the tune of recognizable Christmas carols… but with Halloweeny lyrics. Songs like “Almond Joy to the World” and “I Saw Mommy Kissing Frankenstein”. I wish this was a real thing! Elvira even does a cooking segment where she makes her favorite Halloween snack: Halloweenies. “Some of you more sensitive guys in the audience might want to look away for a second”, she says as she literally drills into a hot dog with a power drill. After carving a little face into the dog and decorating it with Easy Cheese, she tosses it into a pan where it starts to sizzle and moan, ala Mr. Bill.

She wraps up the whole show by doing a Top 10 countdown of the “weirdest, strangest, most bee-zar” videos. There are a lot of gems in there, like Ozzy’s “Shot in the Dark”, Alice Cooper’s “He’s Back”, and Lou Reed’s “No Money Down”. Number One video? Pia Zadora, of course. The scariest one of all!

Probably my favorite thing about the whole program was a “short film” (really, just a music video) directed by Jon Poll for a song called “Hollywood Halloween” by music producer Paul Broucek. The video captures Hollywood and West Hollywood on Halloween night in 1983, and it’s six minutes of pure bliss. Seeing all the strangers in their costumes hamming it up for the cameras, while historic spots on the Hollywood Boulevard of yore pop-up in the background made me homesick for a place and time I’d never been to. It’s a video I will definitely revisit again!

I miss stuff like this. Not just the program; I mean I miss the whole thing. MTV in its heyday. Weirdo, niche mascots being treated like celebrities. Experimental programming that isn’t overproduced. Watching this nearly drowns me in a wave of nostalgia (the commercials from ’86 that were taped off the TV at the time and kept in with the show didn’t help matters). There’s just something so pure about it.  It’s the type of programming that would keep you in front of the TV all night instead of going out to trick-or-treat.

Thankfully, it’s been captured for posterity and uploaded to several sites where it will hopefully live forever, to be enjoyed by future weirdos for many Halloweens to come.

Do yourself a favor and add this to your seasonal watch rotation. You won’t be disappointed!