Halloween Horrors 2020 is nearing its conclusion.

I know, I know. I hate having to type it just as much as you hate having to read it. As such, we’ve reached what will be the final made-for-TV film in this year’s series. While many of the films that were covered in this year’s series didn’t actually originally air during the Halloween season, they each provided enough chills, thrills, and frights (and sometimes, laughs) to provide suitable Halloween viewing entertainment for years.

It seems only fitting that the last TV film on this year’s list comes from the last debuting contributor on this year’s list. Brian Schuck is a life-long horror film fanatic, growing up on a diet of the Universal Monsters and Hammer Films (most of which he also experienced for the first time through the magic of late-night TV). This continuing fascination with fantastic films lead him to start his own site, Films From Beyond the Time Barrier (www.filmsfrombeyond.com), where he discusses classic horror and science fiction cinema (with occasional forays into thrillers and film noir). Be sure to join him as Films From Beyond celebrates its 10th anniversary shortly after this series ends, in November.

I’m thrilled to have Brian join the series this year, and have welcomed and appreciated his support and feedback for the series thus far. I hope to have him rejoin us next year, but for now, I just hope you enjoy this retrospective on what might arguably be one of the lesser-remembered films on this year’s roster, if only for its lack of availability. Hopefully, this piece will not only spark some recognition from older fans who may have over-looked the film in recent years, but also introduce the film to new fans. Who knows? Maybe it will be just enough to get the film restored and re-released.

Ever since Bram Stoker’s Dracula packed up his coffin and set sail for London, vampires, much like ordinary mortals, have looked to the big city for fresh opportunities and new blood. It stands to reason: even if the blood flows freely in the home country, a member of the undead who has accumulated hundreds of years of knowledge and sophistication is going to want a better class of victim than the same old superstitious peasants.

ABC’s made-for-TV movie Vampire, which first aired on October 7th, 1979, is a great example of one such upscale, urban-dwelling bloodsucker.

John and Leslie Rawlins (Jason Miller and Kathryn Harrold), architects by day and a high society power couple by night, are on top of the world after attending the dedication of a new church they designed, Saint Sebastian’s. The church is to be the cornerstone of an ambitious redevelopment project in the heart of bustling San Francisco.

At a party in their toney urban apartment, Leslie is introduced to Anton Voytek (Richard Lynch) by lawyer-friend Nicole (Jessica Walter). Voytek is an exotic sight even for San Francisco: tall, gaunt, blonde hair swept back, he is dressed all in white with the exception of a long coat he wears like a cloak. Leslie is further impressed when she shows him a Delacroix painting they recently acquired, and he casually fills her in on the backstory of the painting and its subject.

Voytek has a proposition for the architects – to unearth a treasure trove of artworks that Voytek’s family brought over to the U.S. as World War II broke out in Europe. They were stored under a mansion that was razed shortly after the war ended – on the very same grounds as the Rawlins’ redevelopment project.

With Anton and Nicole pressuring them, the Rawlins reluctantly agree to dig up the area. In addition to unearthing millions of dollars worth of artworks, they make a grisly discovery — human remains buried alongside the treasures. Deepening the mystery, it turns out that all of the art has been documented as stolen.

Being dutiful citizens, they report their findings to the authorities. When Voytek shows up to inspect the haul, he’s arrested on a charge of conspiracy to commit grand theft. Before the cops take him away, Voytek ominously tells John, “I trusted you, Rawlins. That trust cost me everything I treasure. I assure you, you will be repaid… in kind.” 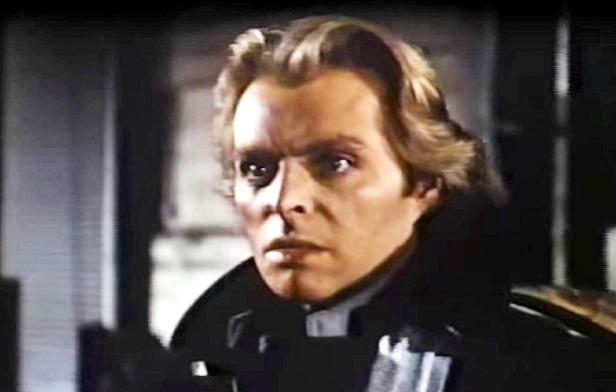 Voytek spends a short time in a holding cell freaking out his cellmates before Nicole shows up to bail him out. At this point, John’s life takes a tragic turn. He comes home to find his wife dead, her body horribly mutilated and drained of blood.

John, of course, knows who killed her, but Nicole provides an alibi for Anton, and the police are reluctant to pick him up again. John breaks into Voytek’s penthouse apartment, where he makes a discovery that sends him reeling.

The once rational, professional man has now become obsessed with vampires, especially a centuries-old former European prince that John’s sources have dubbed “The Golden Vampire” for his striking blonde hair. Before long, the architect crosses paths with a similarly obsessed loner – Harry Kilcoyne (E.G. Marshall), a retired detective who had his own encounters with a vampire-like killer 40 years ago (and lost his partner as a result).

The two men have scores to settle with Anton, but hunting down a cunning and bloodthirsty 700-year-old prince will not be easy, and may well pose a mortal threat to the remaining people in their lives — including a single young mom and her son, whom Kilcoyne has befriended. 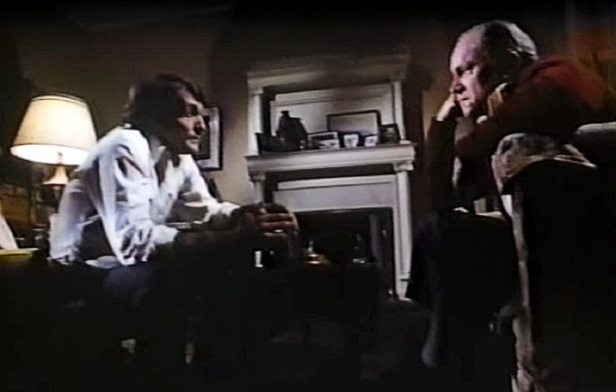 Vampire is a TV movie with the heart and soul of a more expensive feature film, led by a trio of veteran actors who are perfectly cast. Richard Lynch is a gloriously smooth and exotic supernatural villain. He exudes disdain for common humans with his regal bearing and penetrating stare, and menace underlies even his casual banter. However, Voytek is at his most unnerving in his quiet, seething rages at the pesky humans attempting to thwart him:

“I warn you, divest yourself of everyone dear, or I’ll drain them… drop by drop. No love, no bonds, no sanctuary, You will live isolated, until you begin feeding on each other like rats.“

With lines like that, it’s no wonder that in later years Lynch singled out “Anton Voytek” as his favorite role in a long and productive career. Due to an accident that left him with some facial scarring, Lynch was consigned to mostly villain roles. As Voytek, he is a monster, but not a repulsive one. Women can’t resist him, and mortal men are hard put to compete with a dark prince who has been draining civilization of its blood  and treasure for centuries.

Jason Miller, who played “Father Karras” in The Exorcist a few years before, found himself in familiar territory as the architect John Rawlins. Like Karras, Rawlins’ faith is tested — in this case, faith in a rational world where vampires don’t exist. Rawlins doesn’t fear so much for his own soul as that of his unfortunate wife who has been brutally taken by Voytek.

As Father Karras, Miller almost patented the anguished look of a tortured soul. Vampire allows Miller/”Rawlins” to double down on the agonized self-doubt , with an undead wife thrown into the mix to add to the misery index. Towards the end of the film, there is a close up of Rawlins holding a cross to fend off Voytek that could have been lifted straight from The Exorcist. It’s deja-vu all over again.

And then there is E.G. Marshall as the retired detective, Harry Kilcoyne. Marshall, by then an old-pro who had gotten his start in the era of live TV drama, strikes this perfect balance between a hard-boiled ex-cop turned vampire hunter and a benevolent, pipe-smoking father figure. Kilcoyne is a 20th Century urban everyman up against a high Gothic adversary.

Vampire cleverly mixes contemporary and Gothic elements. Kilcoyne and Rawlins arm themselves with an old-school satchel full of wooden crosses, sharpened stakes, and holy water as they go after Voytek. However, it’s Kilcoyne’s experience as a cop that gets them started on the right track by checking with funeral homes and wholesalers for recent purchases of high-end coffins.

Even with the stellar cast and everything else going for it, Vampire might not be your cup of tea. If you’re a fan of female empowerment and action heroines, the movie will be a disappointment (but then, keep in mind that it was made over 40 years ago). The main female characters are all victims: Leslie Rawlins (Harrold) is killed off early and Nicole (Walter) becomes a nervous, self-loathing wreck.

Kilcoyne’s sweet neighbor Andrea (Barrie Youngfellow) gets the most screen time of all the women, but spends most of it as a helpless pawn in the battle between good and evil. The movie drags in the scenes where Andrea is introduced and her relationship with Harry is established.

The abrupt ending will also leave some people scratching their heads — until they realize that Vampire was the pilot for a proposed TV series that never got picked up. The writing team of Steven Bochco and Michael Kozoll would quickly recover and go on to create the beloved Hill Street Blues series, which debuted in 1981. Bochco later capitalized on that success with a string of hit shows, including Doogie Howser, M.D., L.A. Law, and NYPD Blue.

The movie flaws are redeemed by a (mostly) tight script, very good acting, and stylish directing and visuals. It bolts out of the gate like a thoroughbred with an eerie night scene of the vampire clawing himself, zombie-like, out of the damp earth at the redevelopment site.

Another chilling scene features Rawlins lying in a bed at a hospital mental ward as Voytek steals into the room. Eyes wide open and paralyzed with fright, Rawlins’ deathly pale face is slowly swallowed up by the vampire’s shadow as he leans over him.

Even poor Leslie gets her brief moment in the moonlight, when, as a new member of the undead, she wakes up in her luxurious coffin. The scene is highly reminiscent of the glamourous female vampires of the Hammer films. 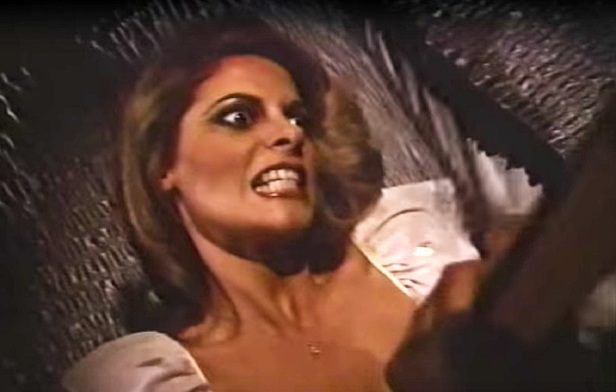 Finally, Bochco and Kozoll add a bit of original business to the vampire lore (at least as far as I know — I don’t recall seeing anything like it in any other vampire films). In Vampire‘s universe, blood suckers are so evil and toxic, not only are their undead bodies vulnerable to holy objects like crosses, the very ground they touch and coffins they rest in are vulnerable as well.

In the opening sequence, the shadow of the huge cross erected at the site for the new church burns the ground that Voytek was buried in. Later on, as Kilcoyne and Rawlins travel around the Bay area hunting down Voytek’s various sanctuaries, they toss crosses into the coffins to make them unusable. As the heavy crosses sink into the pillows, the fabric sizzles and burns.

Last year around this time was Vampire‘s 40th anniversary. In all those years, it has apparently gotten only one paltry VHS release. It would be wonderful if one of these Halloween seasons, it received its due on DVD, Blu-ray, and/or a respectable streaming platform.