One of my favorite parts of each Halloween Horrors series is when someone covers a film or show that I’ve personally not seen. Today’s entry would be one of those cases.

Jennifer Upton of Womanycom.wordpress.com returns for her 3rd year of our October series, this time taking a look at the 1972 made-for-television film When Michael Calls. Are you familiar with it? I sure wasn’t, which is quite surprising when you consider some of the film’s cast members. If you are like me, then this piece will be a learning experience, and isn’t it great that we can still discover something new while celebrating this season we love?

I’m honored to have Jennifer rejoin our series, but also quite happy to discover a film to add to my watchlist in the process.

The ABC Tuesday Night Movie of the Week Presents:
When Michael Calls

Based on the book by John Farris, the film takes place over the Halloween period, and concerns the divorced Helen (Ashley) and her daughter, Peggy (Karen Pearson), who begin to receive mysterious phone calls from someone claiming to be Helen’s younger brother, Michael.

There’s only one problem: Michael is dead. 15 years earlier, following the suicide of their mentally ill mother, Michael ran away, got caught in a blizzard, and froze to death. Now, he wants “Auntie my Helen” to come pick him up. While not altogether uncreepy, the voice of the boy does bear an uncanny resemblance to that of “Martin Prince” on The Simpsons, which ruins the intended effect. The best moment occurs when the caller – who may or may not be Michael – realizes he’s dead and shrieks horribly into the phone. 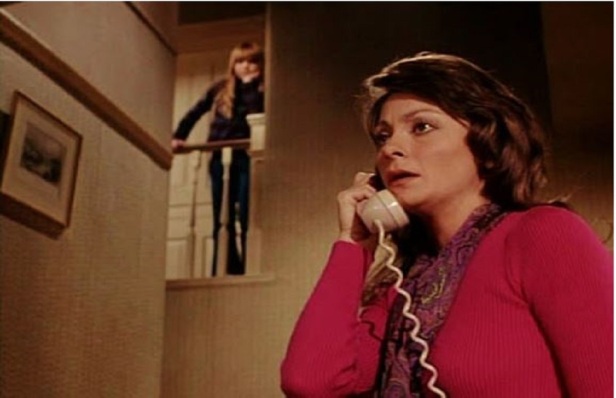 Soon, people connected to Michael begin dying under mysterious circumstances. Helen’s ex-husband, Doremus (an underused movie name, if there ever was one), and her psychologist brother, Craig (Douglas), attempt to crack the case along with the local sheriff, who ends up dead on a pile of jack-o-lanterns for his efforts.

The film straddles the line between supernatural thriller and Giallo murder mystery. Is Michael’s ghost committing the crimes, or is Michael alive and older now? Enter red-herring handyman, Harry Randall. An ill-tempered young man, the exact age Michael would be had he survived his ordeal in the snow. To confuse things further, a spectre-like little blond boy lurks in the fog nearby every time someone is murdered. Of course, the culprit is neither.

The killer turns out to be Craig who works at the local institution/school for troubled boys as a counsellor. Craig has inherited his mother’s mental illness and embarked on a killing spree to avenge her suicide following her involuntary commitment to a hospital years earlier. To assist him, he has hypnotized a mute boy at the school and has set him up as a patsy to the killings. Although his endgame is never clear (he will just go back to being normal after killing everyone?), his admission to Doremus and subsequent mental breakdown at the film’s conclusion is creepy as hell. It’s a pity Michael Douglas didn’t play more psychopaths throughout his career. He was very good at it.

The film was shot in Ontario, Canada on $350,000 – the then-standard budget for ABC MOWs – and features several Canadian actors familiar to horror fans of the 1970s. Marian Waldman – Mrs. Mac in the original Black Christmas and Maureen in Deranged (1974) – plays “Elsa Britton”, and dons a German accent. “Doc Britton” is played by Larry Reynolds, who played “the Mayor” in the original My Bloody Valentine (1980). Here he’s stung to death by his own hive of bees, when the killer switched out chloroform for bee venom to rile them up.

Veteran British film/TV director Phillip Leacock takes great advantage of Canada’s chilly backdrops. Despite many attempts, films shot in Los Angeles never quite capture autumn in the right way. In John Carpenter’s Halloween (1978), the crew had to hand paint leaves and search far and wide for pumpkins to decorate the sets. When Michael Calls was clearly shot during an actual Ontario autumn/winter, replete with layers of damp gold, orange, and red leaves resting in the dead grass beneath the hibernating trees from which they fell. The music is recycled from a 1969 ABC TV-movie called Daughter of the Mind, starring Ray Milland, but is used to good effect.

The film could be considered to be the first in the “phone horror” sub-genre, along with the classics Black Christmas and When a Stranger Calls, which both came after. It harkens back to a simpler time when the simple sound of an old-school phone ringing could put an audience on edge.

The main flaw with the film when viewed through a 2020 lens (aside from the constant chain-smoking), is the performance of actress Karen Pearson as Doremus and Helen Connolly’s daughter, Peggy. She’s clearly around 11 or 12 years of age, but acts as though she were much younger. Her conversations with her over-doting father sound like those a Dad would have with a 7-year old, not an adolescent. The scene where she plays “dress-up” in her mother’s clothes and announces herself as “Mrs. Connolly” felt odd and out-of-place. Thankfully, it cuts away quickly. Almost as if the editor didn’t get it either and wanted to get back to the business of killing off characters.

The film concludes with the reconciliation of the Connollys and their move back to the “big city”. Craig is tucked safely away in an institution, and the mystery of the phone calls has been solved. Best of all, the hypnotized boy has regained his ability to speak.

Although not as well remembered (or as scary) as other MOWs, such as Dark Night of the Scarecrow, When Michael Calls is a perfect example of what could be accomplished in the ’70s on a low-budget TV production when good writing , directing, and acting were involved. It’s definitely worth a watch, especially around Halloween time. It’s a good nostalgic movie to curl up with. The aroma of a pumpkin-spice latte will match perfectly with the images onscreen.