Released in 1982 (1983 stateside), Xtro was a British science fiction horror film in which a father is abducted by visitors from another planet. Years later, the visitors return to drop off an alien/human hybrid that quickly impregnates a woman living in a nearby area, before killing her when a full grown man erupts from her body. The man would appear to be the long-lost father, returned to retrieve the son that he left behind… as well as to kill those that stand in his way. A bleak and bizarre film with a healthy dose of splatterific gore effects, Xtro was far from a box-office smash and received generally negative reviews from critics. However, thanks to the home video boom of the era, the film soon found its audience and would become a cult classic to many.

That film’s director, Harry Bromley Davenport, would return with a sequel in 1990. Simply, and somewhat deceptively, titled Xtro II: The Second Encounter, the sequel would not serve as a direct continuation of its predecessor. In fact, other than featuring a monster than somewhat resembles an alien, Xtro II has nothing whatsoever to do with the first film. Further revealing the sense of dedication to the project, it’s reported that Davenport only made the film because he needed money. That said, if you search this film up on IMDB, you’ll notice that there is no budget listed. This should probably be taken as an indication of what to expect from the film.

While Davenport had retained the rights to the Xtro name, he did not maintain any rights to continue the first film’s story line. This may provide some insight into why Xtro II‘s featured monstrosity is said to originate from an alternate dimension and is seldom, if ever, actually called an “alien”. That said, as this creature is more than “heavily-inspired” by the Xenomorphs of Alien and Aliens fame, any use of that word may have been enough to warrant a lawsuit.

When a scientific team are sent to an alternate dimension via some contraption at an underground base (code-named Project: Nexus), something goes horribly awry and only one female scientist returns. However, as the woman is in severe shock and extremely dehydrated, she is in no condition to reveal what befell her team on “the other side”. One of the project leads, Dr. Summerfield, is scratched by the woman before she is carted off to the infirmary.

Forced with retrieving the lost recon team or losing their funding, there is little choice but to seek the advice of one of Project: Nexus’s creators, Dr. Shepherd. The only other person to have been to the other dimension and have returned alive, Shepherd was forced to resign from the project 3 years prior, when he inexplicably blew that shit up!! Also, it’s somewhat worth noting that as this was seemingly only the second attempt to send people to this alternate dimension, there’s really not enough collected data to make Shepherd’s distinction of making it back tot his side alive all that impressive.

There’s also some question of just how alive Shepherd actually is as the character is played by actor Jan-Michael Vincent. A one-time potential mega-star, Vincent had long been dealing with substance abuse issues, and by this point in his career was in need of work after having been fired from his role on the highly successful television series “Airwolf”. While I’ll admit that it is unsympathetic and arguably mean-spirited to laugh at a person dealing with substance abuse issues and other personal demons, it’s just hard for me to feel too much remorse for someone who’s addiction took them from being television’s highest paid star to headlining low-budget, straight-to-video trash in the span of 5 years.

In the circumstance that Shepherd proved to be a grumpy drunk who was either too inebriated or too disinterested to remember his damned job, a small group of moderately armed soldiers are brought in to clean up the mess. Among them are Nicholas Lea, who is best remembered as “Krycek” on “The X-Files”, and actor Nic Amoroso, who appeared in Empires of Ash and Empires of Ash III. Paul Koslo, who appeared in The Omega Man and Rooster Cogburn, as well as 1989’s Robot Jox, co-star’s as “Summerfield”, who rightfully still resents Shepherd for blowing up the last project.

Rounding out the cast is Tara Buckman as the project’s other current lead, Dr. Julie Casserly, who was also Shepherd’s one-time love interest. Buckman, who had previously appeared in The Cannonball Run, also had notable roles in 1986’s Never Too Young To Die and 1990’s Night Killer. However, she may be most recognizable to horror fans as the ill-fated mother in Silent Night, Deadly Night!

The survivor of the recon mission soon has a large creature rip from her chest, much like in Alien, which then crawls into the compound’s ventilation system, again much like in Alien. Xtro II then realizes it’s easier to just be yet another Alien clone for a while, what with the creature sporadically popping out of the duct work and vents to kill off a slew of background characters, usually off-camera. Eventually Xtro II decides to “get with the times” and becomes a clone of Aliens, complete with darkened elevators, ginormous machine guns, and a cornering of the market on blue lighting! 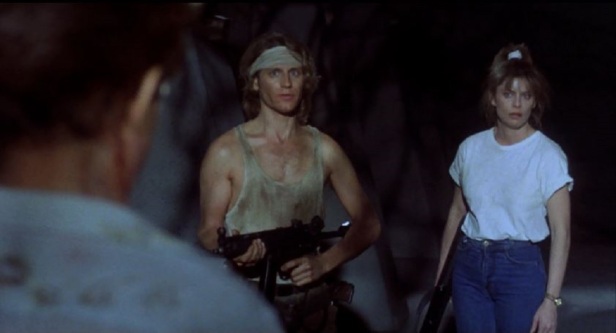 Shepherd is quite aware of the creature’s existence, which is why he had blown up the previous project. As such, he knows that the missing members of the “away team” are long dead and well beyond rescue.  However, as Shepherd provides no truly useful information as to just what is in this alternate dimension or exactly how to kill what has emerged from it, he really adds little to the proceedings and his presence is kind of pointless.  As Jan-Michael Vincent allegedly wasn’t sober enough or just couldn’t be bothered with memorizing his lines, he reportedly had to be fed his lines before each shot, which really makes his presence kind of pointless.

Meanwhile, Summerfield begins showing signs of physical manifestation as a result of the scratch he received from the infected scientist. There’s no surprise whatsoever when a nasty fate does befall the man, so thankfully there is plenty of low-energy action sequences, a fairly repetitive score, tons and tons of stairwells, and one momentum-stopping sequence involving what may or may not be a monster turd to help fill the space until that moment eventually does come. As Vincent couldn’t drink the monster or slam it into a traffic light at 125 miles per hour, he understandably looks bored throughout the film. This may explain why Nicholas Lea’s seemingly unessential character gets so much focus in the film’s second half. Buckman delivers a better job than the film probably deserves, with the remainder of the cast providing decent enough performances.

All that said, the star of the film is undeniably its nameless monster. I mean, it’s not named “Xtro”, right? Hell, it may or may not even be an “Xtro-terrestrial”, like that creepy lil’ alien bastard from the 1st film most certainly was. What it “is” is a stiffly constructed creature that looks close enough to the Xenomorph to hopefully “sucker in” some of that series’ fanbase, while also appearing shoddy enough to warrant being hidden in shadows, or only shown in extreme close-ups. While this creep was neat enough to make 13-year old me rent this movie multiple times, in retrospect, it’s honestly kinda silly looking.

While there is absolutely no way that I can sit here and tell you that Xtro II: The Second Encounter is a well-made movie with a straight face, I’d be lying if I said that I don’t still find the film to be highly entertaining. Granted, I may find certain aspects more amusing than I did when I was younger, but the fact remains that I frequently find myself re-watching this film. Harry Bromley-Davenport would later release a 3rd Xtro film in 1995, which also had nothing in relation to the other films in the series, and is reportedly looking to make a 4th film.

In closing, I find myself obligated to mention my childhood best friend, Jaime, as he not only introduced me to this film, but was the only person that I ever remember enjoying Xtro II as much as I. I can’t say that he would still feel the same about it some 30 years later, but as I’ve not really spoken with him in 25, I can’t really say that I care all that much either. If nothing else, Xtro II: The Second Encounter manages to take me back to 1990, where my friend will always exist as I choose to remember him.