A part of our annual Halloween series since it’s inception back in 2015, Camera Viscera‘s Dr. Jose (not a licensed practitioner) returns to the event for a 5th year! As one of the site’s earliest friends and supporters, it’s always an honor to have him join us.

For this year’s entry, Doc takes a look at 1986’s House. Most certainly, this is one film with a poster image that may have filled more seats than any trailers or television commercials for the film did. While it is one of my personal favorite slices of 80s horror, the film still manages to be somewhat under-appreciated by a large majority of horror fans, despite the fact that it spawned 3 sequels (all of which have little to nothing to do with the original film). As with all of the films featured in this year’s series, hopefully this piece will gain it a few more fans.

Like a lot of people, I’m sure, my first memory of House was that iconic VHS box.

A disembodied, rotting hand—its bony index finger, straight out, ringing a doorbell—floating against a black backdrop. Directly below it, those blood-red letters in a neo-gothic font: HOUSE.

And I can’t remember if it was on the back or the box, or perhaps a preview I saw as a kid, but there was another equally memorable visual that has stayed with me: a lavender-skinned, pig-faced woman with frazzled hair and sharp, red fingernails (and identically sharp teeth). Truly horrifying.

At some point in my youth, I did see House—at least, parts of it. But I hadn’t seen it since then—meaning literal decades. From what I could remember, those clips (combined with the imagination-stoking visuals I recalled from the box) left me with the impression that it was a distinctly funny movie, bordering on parody. 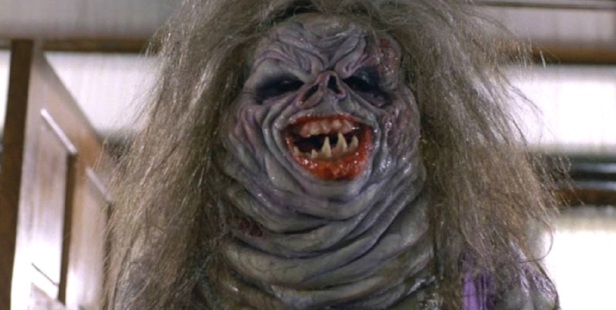 Well, I rewatched House recently, and while it is definitely a horror-comedy (though not parody at all; more of a silly, elbow-in-the-ribs type humor), it’s also pretty serious at points, which I hadn’t remembered.

Like a lot of films from the ’60s, ’70s, and ’80s (hell, early ’90s, too), House is actually a Vietnam movie. While films from the ’70s were commenting on the war while it was happening, movies in the ’80s were dealing with its after-effects; symptoms of PTSD became officially recognized by the American Psychiatric Association in 1980, and all forms of media were quick to explore this new terminology.

It just so happens that our lead in House, Roger (William Katt), is suffering from those very same terrifying flashbacks.

Roger is an author and Vietnam vet. While he writes horror novels mainly, he wants his next book to be about his experiences from the war. It’s clear that he has some major demons to exorcise. But things aren’t taking off with this book the way he was hoping; besides suffering from writer’s block, he’s going through a divorce, and his young son is inexplicably missing.

Against all logic, Roger decides to move into a house that his aunt recently committed suicide in. Friends of hers swear she wasn’t the type to do it, that there must be some other explanation. And while not close to his aunt, Roger is still drawn to the house, perhaps hoping to use it to fire up something inside himself. He soon finds the house is a conduit between time and space; a portal that conjures up his experiences in the war, and the explanation behind his missing child.

Like I said: surprisingly serious stuff! Thankfully, the humor acts as a cushion for all the heavier aspects of the movie. By the end, we find out what’s causing Roger’s haunting memories, and we find out what’s happened to his boy. Don’t worry—it’s a happy ending.

Horror fans of both types should, theoretically, get something out of it, as there are elements of Evil Dead (a fun film that came before it) and Jacob’s Ladder (a serious film that came after it) in House. On one hand, you’ve got this isolated ‘haunted’ location with these goofy, slap-sticky creatures (three cheers for practical effects!) who keep attacking Roger. On the other hand, you’ve got this character study of a war vet, haunted by his past, trying to figure out what’s real and what isn’t (while trying to track down his son). It’s a really cool mix, somewhat unexpected of a horror movie from 1986.

Speaking of unexpected: the talent behind House is kind of a Murderers’ Row of ’80s horror movies. (Was that a pun? If so: not intended!)

The Friday the 13th franchise triple threat of Steve Miner, Sean S. Cunningham, and Harry Manfredini directed, produced, and scored House, respectively. (And boy, can you spot that Manfredini score from a mile away!) And Fred Dekker (of Night of the Creeps and Monster Squad fame) co-wrote House (Furthering the Friday connection: there are a few cameos from past Friday cast members, and Kane Hodder even does stunts here.)

And, in true Fred Dekker fashion, keep your eyes and ears peeled for a few familiar names peppered throughout the movie. Craven Realty, anyone?

If you’ve never seen it—or even if you have and it’s just been awhile—give House another peek. I’m glad I gave it a rewatch. Otherwise, I’d have forever shelved in my brain under “horror comedy”—when it’s much more than that.