Please welcome Sam Panico of BAndSAboutMovies.com back to the Halloween Horrors series for a 3rd year! And as I hope that more than a few of you know, Sam is also a fellow contributor to Drive-In Asylum. Did I mention that there was a new issue about to release?

Did I also mention that October is “Slasher Month” on BAndSAboutMovies.com? Well, it is. So, go check that out…. right after you finish reading this piece.

Let’s give Sam some extra credit here. While everyone else was being assigned letters with which to choose their topics, Sam voluntarily took the letter ‘x’. As I’m sure most of you can assume, there aren’t exactly a lot of titles to work with there. That said, he made the same choice that I would have made myself.

While we may have picked the same film, we surely have differing opinions on its quality. Okay, maybe we don’t. Either way, it didn’t stop my friend Jaime and I from renting it a dozen times after its release.

X-Tro 2: Not Every Halloween Horror Ends (or Starts) Happy

Harry Bromley-Davenport is mainly known for his 1984 film Xtro. It’s magical — a movie with no easy answers, the kind of queasy body horror that might upset even the strongest of stomachs, aliens that might not even come from outer space, and a devastating ending.

He got his start as an assistant to Rebel Without a Cause director Nicholas Ray before directing 1976’s Whispers of Fear and co-writing The Haunting of Julia/Full Circle, the first Peter Straub adaption to make it to the silver screen. This slow-moving rumination on the loss of a child stars Mia Farrow and draws comparisons to Don’t Look Now. However, both of these movies — hell, even Xtro — are pretty difficult to find.

I’ve gone decades without seeing any of the sequels to Bromley-Davenport’s alien odyssey. It’s kind of like a new album coming out from a band that released something that spoke volumes to your soul. What if the new effort just can’t live up to the words you screamed out loud at the top of your lungs?

The director made his way to permanent residence in the US in 1991, just as he prepared to make Xtro II: The Second Encounter. So — after successfully avoiding this movie for nearly three decades, what was it like to encounter it? 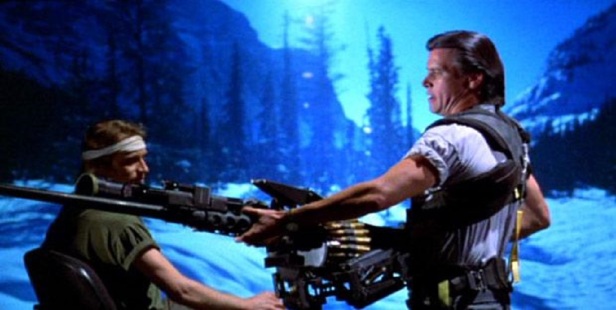 I wish I could say something nicer, but this movie is just utter failure.

If it were a Concorde picture (substitute any of your favorite 1990’s direct to video studio titles here), I wouldn’t be so rough upon it. But for the reasons stated above, I just wanted more. I demanded more. I needed so much more.

Whereas Xtro took a side-eyed glance at E.T. and wondered, “What if this all went wrong?,” the sequel just takes a peek at The Fly and says, “What if we just make our own version of this movie?” 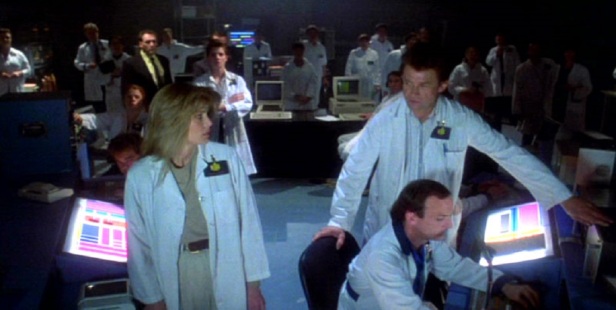 To wit: The scientists at an underground complex have finally figured out how to travel through dimensions. Of course, science should just leave things alone, but a trio of fools saunters through a dimensional gate and are instantly attacked. Much like Alien, a movie that wasn’t afraid to also rip off other motion pictures, whatever was on the other side comes back to kill everything here.

Seeing as how the base has been evacuated, the only ones left are some military troops, the returning Dr. Ron Shepherd (Jan-Michael Vincent, who needed his lines read to him before every scene) and two doctors who hate one another: Dr. Casserly (Tara Buckman, who rode in the Lamborghini with Adrienne Barbeau in The Cannonball Run and was epically menaced in the beyond bonkers Claudio Fragrasso film Night Killer) and Dr. Summerfield (Paul Koslo, The Omega Man, Rooster Cogburn) who just cannot stand each other. 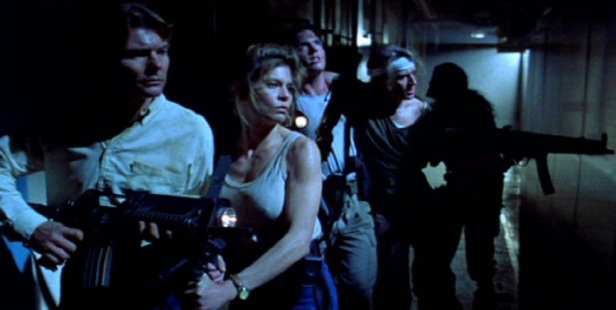 So, why does this movie deviate so much from the original? Well, director Bromley-Davenport somehow retained the rights to the name Xtro, but didn’t get the story rights. When he was in need of some cash, he hired four writers — John A. Curtis, Stephen Lister, Robert Smith and Edward Kovach — to come up with an entirely new tale using the cult-recognized title. That said, Smith was a writer on the original, so I have no idea where this poppycock came from.

Perhaps the blame lies in Winnipeg-based producers Lloyd Simandl and John Curtis, who followed up Empire of the Ash with a sequel that had nothing to do with the first film either. And hey — they mentioned both Alien and Predator on the back of the VHS box, so surely they were looking to con some of Blockbuster’s not-so-clued in customers. Either way, this movie was probably inexpensive to make thanks to those fine Canadian tax shelter rules.

This entire film was lensed inside a dark industrial complex. Think Aliens. Maybe that trip to another reality by the crew in the beginning was to take us from the well-made universe of the first film to whatever this is. 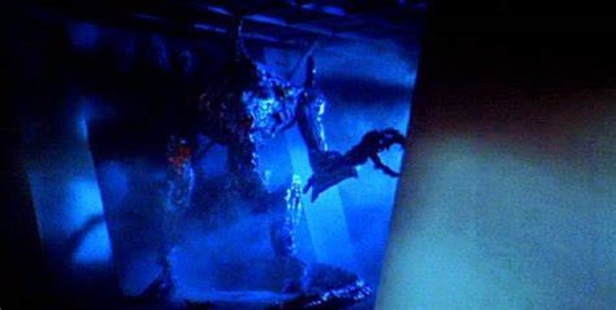 I owe you, dear reader, a better analogy. How about this: Remember that college lover you had, the one you only have fond memories of? Imagine if you somehow got back together with them for one night of passion, only to wake up trapped under their body and now they snore loudly and have suddenly changed appearance and shape from when you passed out in a heap of sweaty passion. Now imagine they roll over and elbow you right in the eye. That should give you a small glimpse into how painful Xtro II: The Second Encounter is.

As for Bromley-Davenport, once he shat upon the Xtro name once more with 1995’s Xtro 3: Watch the Skies, he stayed mostly in the world of making incredibly sad films, like the true story of a feral child (2001’s Mockingbird Don’t Sing), an immigrant girl adopted to become a child porn star (2006’s Smile Pretty), and another movie based on true facts, 2010’s Frozen Kiss, in which two teens in love do a bunch of meth and freeze to death in their car. He claims that he’s ready to make a fourth Xtro movie, a fact which worries me as I know I’ll be compelled to watch it.