Our next contributor in this year’s Halloween Horrors series is Bill Van Ryn. Bill is the creator and editor of cult fanzine DRIVE-IN ASYLUM, maintains a film blog called GROOVY DOOM, and shares a vast assortment of vintage film ads via the GROOVY DOOM Facebook page. He wrote that last sentence himself and I really see no reason to change it. That, and after having written 12 of these intros already, I’m honestly starting to phone it in.

For 2018’s Years of Fears series, his third year contributing, Bill claimed the year of 1973 and the film Messiah of Evil. Only problem was that neither of us realized that the film ACTUALLY released in 1974! As no other contributor attempted to claim that year, we are just going to pretend that none of this ever happened. So, just go ahead and forget everything that you’ve just read.

Except that 1st paragraph. That’s kinda important. Speaking of which….. 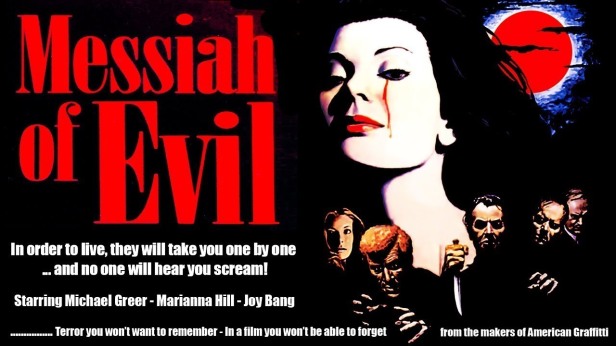 Somewhere between waking and dreaming, between art film and horror cheapie, between brilliant invention and shameless plagiarism, lies “Messiah of Evil”, and Halloween is the perfect time of year for it. Unleashed on the world in 1974, this gloriously bizarre film was created several years earlier by Willard Hyuck and Gloria Katz, who would later go on to write “American Graffiti” and “Indiana Jones and the Temple of Doom” with George Lucas. As film makers, real life couple Hyuck and Katz created their own projects as a team, with Hyuck directing and Katz producing. “Messiah of Evil” was the first project they worked on together, and after making the well-received comedy/drama “French Postcards” in 1979, they delivered a pair of box office flops. Their first was 1984’s “Best Defense“, a war film starring Dudley Moore and Eddie Murphy. Despite the film’s failure, in 1986 George Lucas placed Hyuck at the helm of a film that he intended to be a box office smash that would get him out of debt after building his $50 million Skywalker Ranch. It didn’t, because that movie was “Howard the Duck“, and its legendary failure was devastating to many people involved. It effectively ended the directing/producing careers of Hyuck and Katz.

“Messiah of Evil” is not without its own production problems. When it was shot in 1971, Hyuck and Katz were stunned to discover that one of their investors was not actually paying anybody involved with the film, and the production grounded to a halt before the movie was completed. Most of what was missing was the film’s climax, of which only a few rudimentary shots had been completed before the movie was shelved due to the financial problems. Luckily for us, the film was

purchased by another distributor, and some creative editing and voiceover narration managed to dodge the missing portions of the climax.

The story is that of a young woman named Arletty, played by Marianna Hill (“The Baby“, “Blood Beach“, “The Godfather Part II“, “High Plains Drifter”). Arletty arrives in the small, isolated town of Point Dune along the Pacific coast, where she hopes to make contact with her estranged father. After sending Arletty a series of troubling letters, he ceases all communication, and she arrives at his seaside home to find it abandoned. Also new in Point Dune is an odd European aristocrat named Thom (Michael Greer) and his two female ‘traveling companions’. Toni (Joy Bang) and Laura (Anitra Ford). Thom is in town to research a local legend known as “the Dark Stranger”, a man who supposedly turned the entire town on to cannibalism some hundred years prior. The hostility of the locals, as well as some very strange deaths, seems to indicate that the Dark Stranger is on the verge of returning to Point Dune to reclaim his cannibal cult.

Elliptical as it is, Messiah of Evil is still a spooky, dreamlike collection of exquisitely shot sequences. The missing scenes at the conclusion render the movie a mystery, although it’s not too difficult to understand where it was going. It is not a satisfying narrative, and you’re likely to be confused or bored by it if you prefer your moviers fast paced and linear. Hyuck, however, has a masterful sense of vision in this movie, and it’s full of memorable images that are beautiful, eerie, gruesome, and sometimes terrifying. The fact that it forces you to use your imagination a little only makes the stuff that happened earlier more unsettling. Like a nightmare, there are no real explanations, only an inherent sense of dread and doom.

The art direction is a big indicator of the lofty intentions Hyuck and Katz had for their movie. The main location is a house decorated with breathtaking forced-perspective murals all over the walls, many of which feature disturbingly realistic human figures who seem to be lurking in the background of every scene there. The Bava-esque lighting is fantastic, something that was temporarily lost when Messiah‘s home video transfers first made the rounds in a series of dicey VHS releases. Code Red delivered both a DVD and a blu-ray transfer that was a revelation compared to the earlier ones, and it really brought out the true effect of the atmospheric design.

Last year, I interviewed star Marianna Hill for DRIVE-IN ASYLUM #9. She revealed some of the film’s creative source when she said “Everybody at the time was into (movies) like “Hiroshime Mon Amour“, and the films of Alain Resnais. I assumed they’d based (the character of Arletty) on the actress Arletty — she was a beautiful French actrss from the 20s. I did some research on her and I based my characterization on her persona, her mystique, and my idea of her.” Actress Linda Gillen (“Terror House“, “The Magic Garden of Stanley Sweetheart“) also auditioned for Hyuck and Katz, and when I interviewed her for DIA #8 she revealed that she was offered the role of Toni. “Gloria and Willard told me they wanted the part to be like “Performance” (1970), that French girl who kind of looked like a boy (Michèle Breton).” Gillen was roommates with Joy Bang at the time, and when she decided to pass on “Messiah of Evil” and take “Terror House” instead, she referred Joy to Hyuck and Katz, who ended up giving her the role.

The enigmatic Antra Ford (“The Big Birdcage“, “Invasion of the Bee Girls“) is another unforgettable presence in the film, and she also recalled the artistic aspects of this film in an interview with Bradley Steele Harding in DRIVE-IN ASYLUM #9: “One of the first days of shooting, I recall walking into an old house north of the 101 Freeway around Western Avenue. This would become one of our primary locations for the film. I walked through the front door into a living room, and was astonished. The walls were covered with art, but this was REAL art. I was beginning to realize then that I was part of something of taste, something beyond and above anything typical.”

Considering the premise is that a strange “sickness” transforms ordinary people into cannibalistic attackers, the temptation is to compare the film to “Night of the Living Dead” — the transformed don’t die when shot, they bleed from the eyes, and they have an animalistic manner. But they can also pass for normal. They still have memories, they are self-aware, they speak, they operate machines, they drive, they run. These are not exactly zombies, they’re also lie pod people from “Invasion of the Body Snatchers” because there’s a conspiracy  among them to claim normals and ‘convert’ them.

beginning to surface. They did it again in 1979, even going so far as to rip off the original poster artwork for “Night” and the tag line for “Dawn of the Dead“: “When there’s no more room in hell, the dead will walk the earth!” Romero put a stop to it with a court order, and the title was changed to “Night of the Damned“, “Revenge of the Screaming Dead“, and “Dead People“, depending on when and where you saw it. 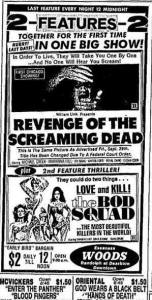 There are at least two scenes in the film that are actually pretty scary the first time you see it, and Hyuck sets up each of them with suspenseful lead-ins that show characters being slowly lured into deadly traps. He’s not in a rush to knock off his players, and takes great delight in the visual details of his settings. In addition to the aforementioned murals in the main house where the scenes take place, Hyuck exaggerates the dread in several memorable moments. A gas station in the middle of nowhere is lit by neon embellishments; the sole occupant is attacked, and all the lights begin to switch off, until the place is in complete darkness. The harsh fluorescent lighting of a supermarket illuminates a bizarre sight that suddenly confronts a woman who was unlucky enough to wander inside. A movie theater, also lit by neon and a colorful marquee, becomes a trap for a normal patron who enters to watch a movie and winds up surrounded by ghoulish figures, their faces lit with blue lighting.

Something about “Messiah of Evil” just works, although many people may have sought it out only to be

disappointed that it was not a real “flesh eating zombie”. There are a few bloody scenes, but nothing even remotely close to “Night of the Living Dead” or a Herschell Gordon Lewis movie, so gorehounds will not find much here to hold onto. This isn’t a bad thing for me, though, and “Messiah of Evil” is an absolute must for my October viewing. If you haven’t seen it, seek it out, or if you have, it’s time to revisit Point Dune.