Our next contributor is Mandi Fallon. Mandi is one of our longest running Halloween Horrors contributors, having been involved since the very beginning. As anyone who has followed the series or the site for any extended period of time can tell you, this is because I give her no choice in the matter. Being my wife, she MUST take part in this series or I will bitch and whine like the biggest spoiled baby that you’ve ever seen. And it’s not like she doesn’t already deal with enough of that shit as it is.

For her 2018 Halloween Horrors entry, Mandi takes a look at what is easily one of both of our favorite Hammer films, 1968’s The Devil Rides Out (also known as The Devil’s Bride). A large reason for this is an exceptional performance by Hammer’s “moneymaker”, the legendary Christopher Lee.

All that said, the thing that I may find most amusing about Mandi’s claim of 1968 is not her choice of movie itself, but the fact that her claim, one that was made before the series was even announced due to her personal relationship, blocked others from claiming what would have surely been one of the first movies picked by other potential contributors. That movie is none other than George Romero’s Night of the Living Dead. I’m looking at you, Brett Wainer!

The Devil’s Bride/The Devil Rides out will be airing tonight on Turner Classic Movies at 8PM EST. Go, watch it, and then come back and read this piece again! 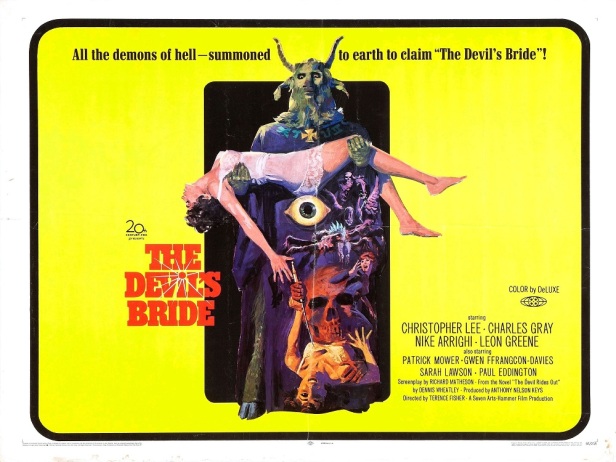 I don’t know when I first became ‘aware’ of what Hammer films were, but it was sometime in the mid-2000’s. I saw Horror of Dracula as a kid, but did not realize in my naïve youth just how pivotal this film was in British horror history. Nor did I know who the Hell Christopher Lee or Peter Cushing were or how beloved they would become to me in my adult years. When I watched Horror of Dracula again as a twenty-something year old, certain scenes triggered memories of my first viewing. It was then that I learned of the entire ‘Hammer Horror’ series of films, which only meant one thing: I was enamored with seeing them ALL, which I did over the next several years.

I happened to catch The Devil’s Bride on Turner Classic Movies quite a few years ago. I instantly fell in love with this movie! In the version that I recorded on my DVR, TCM’s Ben Mankiewicz gave a short forward for the film. It’s in this forward that I learned that the film was originally released in England as The Devil Rides Out, but was changed for the American release because they felt it sounded too much like a ‘Western’ film instead of what it was – a movie about devil worshipers. They thought it would be more fitting as The Devil’s Bride, not to mention that they were trying to capitalize on the success of Rosemary’s Baby, which had been released just a month prior in June of 1968. The film was actually proposed in 1963, based on a 1934 novel by Dennis Wheatley, but due to censorship the project was put on hold and re-visited once the culture of the 60’s really started to surface. 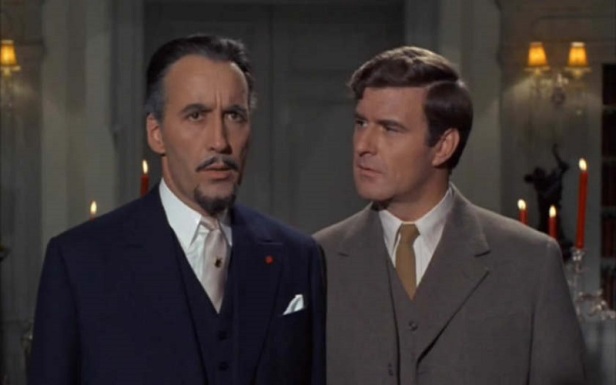 Set in 1929, the film begins with Nicholas, Duc de Richleau (played by Lee, but seriously – can I get this title??) travelling to meet long-time friend and war buddy Rex Van Ryn (Leon Greene, A Funny Thing Happened on the Way to the Forum, Flash Gordon). Rex tells Nicholas that he is concerned about Simon, the son of another friend that had since passed away. Simon is like a godson to Rex and Nicholas and had not been heard from recently. De Richleau grows immediately concerned and has their driver make a bee-line to young Simon’s pad. And what a pad it is! That is, if devil worshiping, pentagrams, and chicken sacrificing are your “thing”.

Upon arriving at Simon’s, Nicholas is immediately suspicious of the “Astronomical Society” that their young friend is hosting. The pair is only able to mingle for mere minutes. It is during this brief encounter with the “Society” that they meet Mocata (Charles Gray, Diamonds Are Forever, The Rocky Horror Picture Show) and Tanith (Nike’ Arrighi, Sunday Bloody Sunday, Countess Dracula). Rex and Tanith exchange a glance as if they know each other, but Tanith denies remembering Rex whatsoever. She then makes the mistake of saying, “Surely there weren’t meant to be more than 13” before she learns that Rex and Nicholas are not part of the society and abruptly excuses herself from the conversation.

After the brief encounter, Simon tries to shew-off his would-be Dads, but de Richleau isn’t having any of it. He insists on seeing the telescope on the second floor and helps himself up the stairs. But really, when Christopher Lee wants something, you just give it to him. Anyway, upon entering the room, Nicholas comments immediately on the ornate design on the tile in the robust, empty space. It’s a Satanic symbol, which pairs nicely with the pentagram art on the walls. Suddenly, they hear a strange noise coming from the closet.  De Richleau (in grand, dramatic Lee fashion) pulls open the doors to reveal a wicker basket that is housing a live white hen and a black cockerel, which we later learn is part of some super evil Satanic sacrificial ceremony. At this point, Nicholas clocks Simon in the face and he’s down for the count.

After “rescuing” Simon, de Richleau finally convinces the disbelieving Rex that Simon has involved himself in a Satanic cult. Rex explains to Nicholas that he has met Tanith before. Simon escapes from Nicholas’ house (after feigning choking himself with a crucifix necklace), and they decide that hey can find him by way of Tanith. 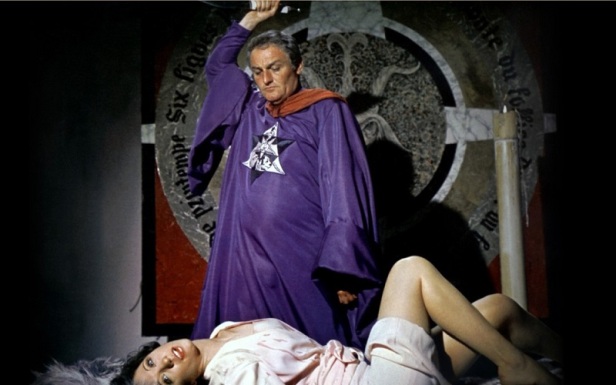 I won’t ruin the rest of the movie for you if you haven’t seen it. There is a lot more to come from the point where I leave off. We are introduced to three more pivotal characters who are immediately endearing. We are also witness to the slaughter of a goat (well, indirectly), in which the entire devil worshiping clan dance while showering in the poor thing’s blood.

Directed by Terrance Fisher (who was basically a Hammer fixture), he does a phenomenal job of making these characters more than just two-dimensional. This film could easily have been a huge piece of cheese (I mean, dancing in goat’s blood??), but it isn’t. It has just the right amount of dark content, symbolic imagery, and fine acting. He pulls all of these things together to deliver a solid, well-made entry into the Hammer repertoire. Lee, Gray, and Arrighi are particularly excellent in the film.

To say that I have seen this film 100 times is a gross understatement. I went through a huge Devil’s Bride phase where I would fall asleep to it literally every single night for at least a year. Sometimes I wouldn’t make it past Ben Mankiewicz’s intro, but that was ok, I knew it by heart anyway. Christopher Lee was quoted as saying that this was one of his most favorite of all his roles. Maybe it was because it was one of the rare chances where he was able to play the “hero” instead of the “villain”. Whatever the cause, it’s one of my favorites too, Mr. Lee. 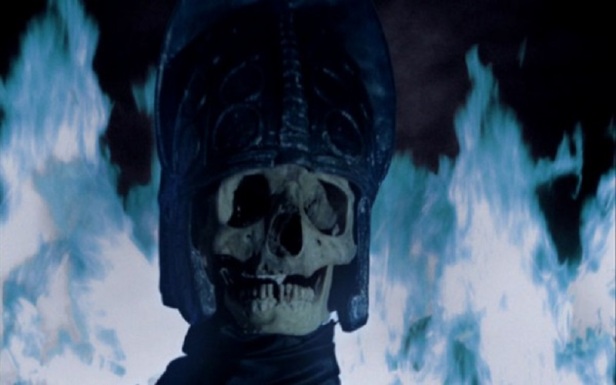