As yet another year comes to a close, you are bound to see a number of websites breaking out their obligatory “Best of the Year” lists. You’re also likely to see more than a couple lists featuring that specific writer’s “wishlist” of horror films that have yet to make the leap to HD Blu-ray. This list will be no different.

The following are the films that I (personally) most want to see receive a blu-ray release in 2018. For this list, I’ve tried to exclude films that have already been announced for release, as well as films that (as far as I know) have received blu-ray releases in other countries. That said, a couple of those titles still made this list, but their inclusion will be explained in their respective entry.

So, without further delay, here is….

Horror And Sons’ Top 12 Most Requested Blu-ray Releases for 2018!

#12 – Trick or Treat (1986) – Despite it usually being excluded from most of the lists that I see of other websites’ and writers’ “biggest” and best horror films of the 80’s, Trick or Treat undoubtedly has one of the most rabid fanbases that I’ve ever encountered. While the 80’s featured its share of metal inspired horrors, such as Black Roses and Hack O’Lantern, none featured a heavy metal anti-hero quite as memorable as Sammi Curr. And I’m sure that the cameo appearances from Gene Simmons and Ozzy “Prince of Fuckin’ Darkness” Osbourne didn’t hurt the film’s chance of finding its audience.

Trick or Treat has received a few blu-ray releases in Germany, including 2 stylish mediabook releases, but surprisingly nothing here in the States. Whether this is due to licensing issues with the music or not, I can’t say. However, I’m positive that there would be a massive turn out for a “limited” or “special” edition release packaged with a CD of the film’s soundtrack. Maybe even a vinyl pressing to make it more fitting to the source material?

#11 – The Undertaker and His Pals (1966) – For those that haven’t watched it, The Undertaker and His Pals is almost like watching a more comedic version of HG Lewis’s Blood Feast, minus all that nonsense about Ishtar. While the gore here is less revered than Lewis’s film, Undertaker still delivers a nice dose of meaty red stuff, including a particularly gruesome evisceration scene, which would benefit from a quality HD transfer. The film is readily available on numerous budget bin compilations and SD boxsets, but most of those copies feature highly noticeable color degradation that is just dying to be fixed.

Fans of black humor, quality “cheese”, and early-era “splatter” will surely want to give this title a go. I could see Vinegar Syndrome adding this one to their catalog. It would make a nice double feature with their The Corpse Grinders release. 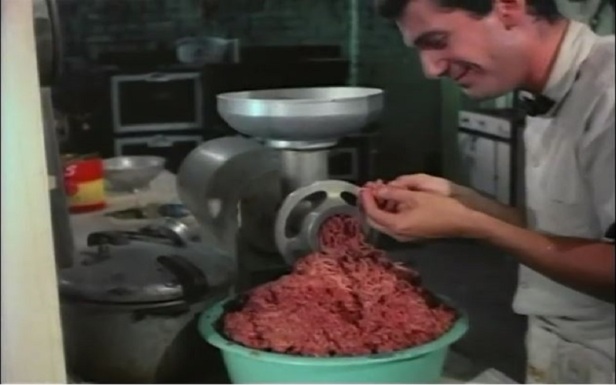 #10 – Tombs of the Blind Dead (1972) – It was recently announced that Scream Factory would be bringing Night of the Seagulls, the 4th film in the Blind Dead/Knights Templar saga, to blu-ray some time in 2018. While most inevitably took this as reason to believe that a Blind Dead boxset could presumably be in the works, Scream Factory would quickly squash those dreams by announcing that, due to rights issues, no such thing was currently in the works.

Then again, they also said that the Halloween Collection was supposed to be a “limited edition” release, and look how that turned out. So, here’s to hoping that the other films in the series receive a blu-ray release, starting with the first (and best) film in the series.

#9 – Brides of Blood (1968) – Brides of Blood is probably the most obscure film on this list. The 1st film in the Philipines-lensed “Blood Island” trilogy, this Gerardo De Leon & Eddie Romero directed film features all of the “B’s” essential to a good B-movie: Beasts, blood, and boobs!!! Oh, and banana plants. While the upgrade to HD would surely highlight every innumerable thing that went wrong with the make-up and monster costume, the lush green of the tropical environments and robust orange of the island sunset would surely look quite pleasing with the uptick in visual quality that a decent HD transfer would bring.

Current DVD releases have some print damage and issues with cropping and framing. Hopefully, these can be fixed for a HD release, but even if they aren’t, I wouldn’t complain.

#8 – The Hitcher (1986) – How has The Hitcher not seen a blu-ray release by now? It’s a well-remembered film with a solid fanbase that features notable actors and was released by a once major studio. It was even memorable enough to spawn a completely unmemorable sequel, as well as an equally forgettable remake.

While there are no special effects that would be “showcased” by the HD upgrade, the uptick in visual quality would surely make the multiple desert shots look that much more grand and the empty highway that much more foreboding.

#7 – Hunter’s Blood (1986) – Another fairly forgotten title, Hunter’s Blood is a mid-80’s, backwoods-horror film released by Roger Corman’s New Concorde line. Think Deliverance, but with way more gore and none of the Ned Beatty-raping.

If for no other reason, Hunter’s Blood deserves more attention for its notable cast of genre stalwarts, which includes Clu Gulagher, Charles Cyphers, Joey Travolta, Billy Drago, Kim Delaney, and Bruce Glover. The film also marks the screen debut of Billy Bob Thornton, although if you blink, you might miss him. Hunter’s Blood also features an extremely nasty “death by shotgun” scene that has always stood out for me ever since I first saw it in the theater upon the film’s release. Granted, it was an empty theater.

As Hunter’s Blood never received a proper DVD (at least, in the US), hopefully a new blu-ray transfer will help it reach the larger audience that it deserves.

#6 – Hello, Mary Lou: Prom Night 2 (1987) – I’m sure to alienate some readers with the following comment, but I’m saying it anyway. Hello, Mary Lou: Prom Night 2, despite having nothing whatsoever to do with its predecessor, is a more entertaining film than the original Prom Night. Sure, the original featured Jaime Lee Curtis during the peak of her “scream queen” days, but it’s really just another derivative slasher highlighted by some atrocious disco music. That said, it is undoubtedly better remembered and respected than this high-energy follow-up. 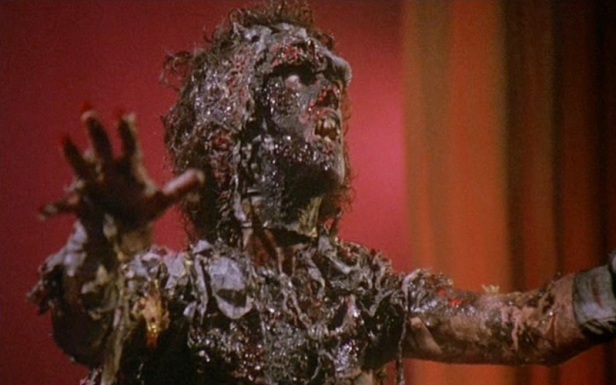 #5 – It’s Alive (1974) – Much like The Hitcher, it’s more than a little surprising that a well-known, well-respected horror film such as It’s Alive has yet to receive a blu-ray release. While an upgrade in visual quality may expose some of the limitations of Rick Baker’s then-innovative creature effects, it may also highlight just how intricate and detailed the Davis baby creation actually is.

What fans would definitely welcome is some behind the scenes features or retrospectives on the making of the film, particularly from Baker and director Larry Cohen. 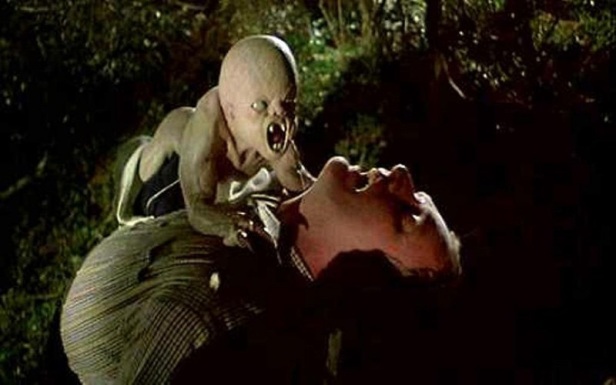 #4 – Rock N’ Roll Nightmare (1987) – Okay, I admit it. There is no real reason that this one needs a blu-ray release. I just want one. That said, Jon Mikl Thor’s metal underwear may be the real reason HD was created.

Like Trick or Treat, a special edition featuring a vinyl release of the film’s soundtrack, featuring music from Triton (aka Thor), would be the ultimate in fan service for a film that really doesn’t have that many fans.

#3 – The Giant Gila Monster/The Killer Shrews (1959) – Much like Rock N’ Roll Nightmare, these two films are just personal favorites. While the number of releases has grown as of late, 50’s sci-fi and horror is still somewhat under represented on the Blu-ray format. I listed these films as a double feature, just as they were paired upon their original release, because that’s the way these films were meant to be seen.

As many viewers were introduced to these films through their being featured on Mystery Science Theater 3000, maybe Scream Factory can release them and include their respective MST3K episodes as “Special Features”, much like their release of The Brain That Wouldn’t Die. I also wouldn’t be surprised to see a release like this come from Fred Olen Ray’s Retromedia as well.

#2 – Critters (1986) – What’s the damned hold up here, New Line? Critters fans have been clamoring for a blu-ray transfer ever since the format first released. While a few of the effects from the opening outer space sequence may look extremely dated, most of the film’s other effects would undoubtedly benefit from the upgrade in audio video quality. Fans would also greatly appreciate any “making of” featurettes that may be included, as the DVD releases were quite bare bones.

As the 1st 2 films in the series would surely be the better sellers, maybe it would be in the best interest to release the entire series in a box set. Hey, fans can wish right?

#1 – War of the Worlds (1953) – Some of you may already be thinking, “but it’s not a horror film”. And you are right. Despite some truly horrifying and grim moments that embody the very essence of “horror”, War of the Worlds is first and foremost a Science Fiction film. It’s also one of the best made and most important sci-fi films EVER!!! There’s just no excuse for this film not already being available in HD.

While the upgrade would undoubtedly reveal the strings used to move the models of the Martian ships, who really cares? The innovative laser effects, the amazing matte paintings, and the stellar music composition from Leith Stevens would all surely benefit from the upgrade, which more than makes up for the appearance of a few strings.

While most of the cast and crew are sadly no longer with us (Hey, it’s a 65-year-old movie!), there is still plenty of behind the scene info and production trivia that could be covered on included Special Features. Including Orson Welles’ 1938 radio broadcast would make a nice bonus feature, but including a copy of Jeff Wayne’s 1978 “rock opera” would help make it a fanboy’s dream release.

So, that’s our list! Were there titles that you feel that we overlooked? Titles you would have omitted? Let us know in the comments section!

Be sure to check out the Horror And Sons’ Recommendations Page on Amazon: https://www.amazon.com/shop/horrorandsons