Another year of Halloween Horrors is upon us, and what better way to start off the series than with a piece featuring one of the genre’s “heavy hitters”…… the dead skin mask wearing psychopath known as “Leatherface”.

Leading off our series this year is Andrew “The King of Horror” Guthlein, one of the hosts of the horror radio show, Talking Terror. Now, I’ll be quite honest. While I always eagerly welcome new contributors to the Halloween Horrors line-up, I was not familiar with Talking Terror prior to Andrew’s signing on. As I would with any of the contributors coming in from other outlets, I took it upon myself to familiarize myself with their work. I’m pretty glad that I did.

Besides having a “passion” for the topic at hand, one of the first things that I look for when “evaluating” other sites/podcasts is “determination”. How often do they post new content? How well and how often do they try to interact with their audience? Are they enjoying what they do? I can most assuredly tell you that the crew at Talking Terror meet and surpass each of these goals. I am honored to have Andrew joining our ranks, and I hope that his co-hosts will follow suit in future series.

For his Halloween Horrors debut, Andrew takes one of the genre’s most memorable maniacs and presents a case for why this “madman” is really more of a misunderstood innocent.

Leatherface: The Saw is Family….

By Andrew “The King of Horror” Guthlein

As the sun rose over that lone stretch of road deep in the heart of Texas, Sally was making her escape. Covered in blood, she screamed and laughed in a crazed triumph as a large man, clad in a mask made of human skin, danced wildly with a chainsaw gripped in his blood stained hands. That man would become known to the world as “Leatherface”; a member of the cannibalistic Sawyer family. While there have been numerous sequels and two reboots, with another film coming out later this year, I’m focusing solely on the 1974 Tobe Hooper classic, The Texas Chainsaw Massacre. While it may be easy to simply group him in with other Horror giants such as Michael Myers, Freddy Krueger, or Jason Voorhees; I don’t think it is so easy. That is why I have chosen to come to the defense of Leatherface.

I’m sure you must think that I’m just as insane as the hitchhiker or the cook to defend such a chainsaw wielding maniac like Leatherface, but I feel that compared to other horror film monsters, he is more in line with Frankenstein’s creation than an undead slasher with bloodshed on their minds. Come back with me to the date of that first film, August 18th 1973, and look at that fateful day, not from the perspective of the group of youths, but from the eyes of Leatherface. We don’t know much about him aside from the fact that he lives in an isolated farmhouse with his two brothers and an ancient Grandfather. There are no women in this place aside from the body of a mummified woman that we can wager is the Grandmother. Each living member of the Sawyer family has a role to play in this story. The hitchhiker is a hunter/gatherer, while the cook runs the gas station, serving up barbeque of questionable origins. Leatherface takes care of the family in a maternal sense and he is incredibly protective. He is someone who would rather stay in the house, prepare meals, and stay hidden.

There is no explanation as to why he cannot speak, nor do we really need one. He grunts and squeals like a pig that would likely become barbeque in his hands. Leatherface expresses himself through the masks he wears and, as we see in the film, he has a number of them. When we are introduced to the first mask, aka “The Hunter” mask, it is to see the demise of Kirk courtesy of a meat hammer. The second mask comes towards the end of the film once Sally has been captured by the Cook. It is the mask of an old woman, complete with a mop of gray hair on top. Clad in a floral print apron, we see him wearing this mask as he toils around the kitchen preparing dinner for his brothers. The final mask is known as “The pretty woman” mask. He puts on this mask along with his best suit to sit down to dinner with the family and a terrified Sally. 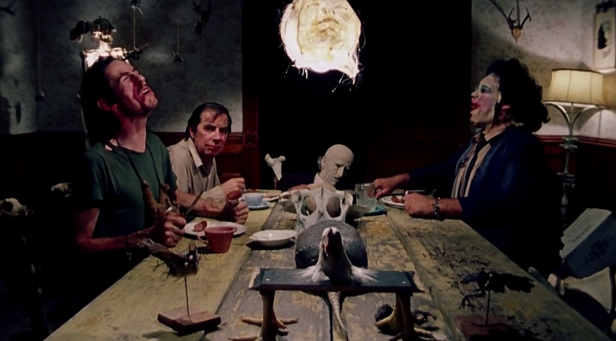 These masks define who he is as a person and display what he is feeling at that moment. He would be nothing without them, much like how he would be lost without the company of his brothers. Unlike the cook and the hitchhiker, who are out and about in the world, Leatherface is more than happy to take on the domestic role. He doesn’t have a need to kill, unlike the Hitchhiker who takes glee in murder. This will bring us to my next argument. In The Texas Chainsaw Massacre, Leatherface isn’t hunting down the group of youths, he’s protecting the farmhouse.

Kirk, in search of gasoline for the van with his girlfriend Pam, happens upon the Sawyer home, thinking that it may be a good chance to exchange gasoline for his guitar and a few bucks. We know what happens next, but the intention is to look at this from Leatherface’s perspective. He was somewhere in the house, more than likely taking care of tasks around the house, when a stranger enters his home without an invitation. This is what leads to the first death of the film; a frightened Leatherface kills Kirk and goes about what he has been doing for so long. He treats him like a piece of meat that needs to be prepared.

When Kirk doesn’t come out of the house, Pam goes inside to find out where he is and discovers that someone has crafted furniture out of human flesh, skulls, and bones. Leatherface once again discovers yet another stranger in his house and goes on the defensive. He grabs her and hangs her from a meat hook while he carves up Kirk with his beloved chainsaw. Yes, it is brutal and it is incredibly hard to watch, but in these two separate moments, he is defending his home from intruders and acting on instinct. He murders the trespassers and prepares them for food for the family. 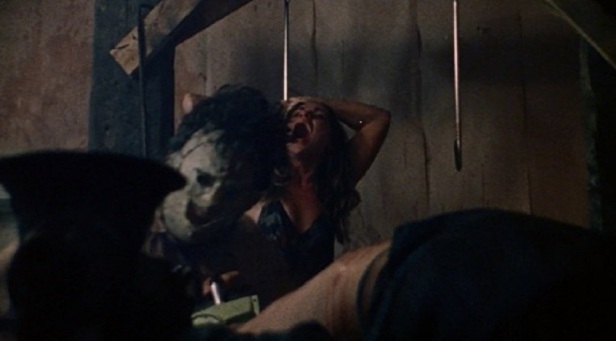 In what might be one of the more compelling moments in the film, we see the reaction of Leatherface after he kills Jerry with a meat hammer. Instead of hulking over the body in menace, he has a moment where he panics. He runs around the house in a frenzy, finally sitting down in a chair and looking out of the window while smacking the sides of his mask. This is a moment that is unlike most films that feature “slashers”. Leatherface isn’t happy that he has just murdered three people. He’s worried and anxious. Without saying a word, using only expression, we see that he is feeling this way. Many may disagree, but it is this moment where I felt compassion for him.

There is a moment I brought up earlier in this piece where I mentioned the old woman mask that Leatherface wears. To this day, when the cook brings in Sally to be tied up and we see him clad in the floral apron and mask, we understand that he is the domestic caretaker of the home. This is also when he is beaten by the cook for ruining the front door with his chainsaw. You would think that Leatherface would stand up to his brother, but instead he takes the beating while squealing and moaning and trying to explain in his own way about why the door is cut up. It is an odd moment in the film and furthers my defense that instead of having the mindset that Leatherface is nothing more than a blood thirsty psychopath, we should look at him as someone who just wants to protect his home and family from those that don’t belong there.

I want to conclude with the finale of the film. Sally wakes up and quickly discovers that she is in a dangerous place. She is tied to a chair with a plate of sausage in front of her. As she screams, the hitchhiker mocks her, while Leatherface screams along with her. We see that he is now wearing a suit and a mask that is caked in powder, smeared with red lipstick, and blotches of blue eye shadow. In his mind, this was a dinner party and he wanted to look his best. It is a bizarre thing to see a maniac that takes an interest in how he looks, but it is yet another aspect to him that is worth mentioning.

As we know, Sally escapes as the family tries to get Grandpa to kill her with a mallet. Using Grandpa’s weakness to her advantage, she jumps through a window in the living room and attempts to escape her captors. With the Hitchhiker in pursuit, slashing and hacking at her back with his knife, Leatherface emerges from the house, revving his chainsaw and giving chase. He witnesses his brother get killed by a passing truck and in a rage, attacks the truck, madly sawing at the driver’s side door to no avail. After being struck with a wrench and nearly getting his leg sawed off, Leatherface is still intent on going after Sally. At this point, he wants revenge for his brother’s death and he will do whatever it takes to get it. 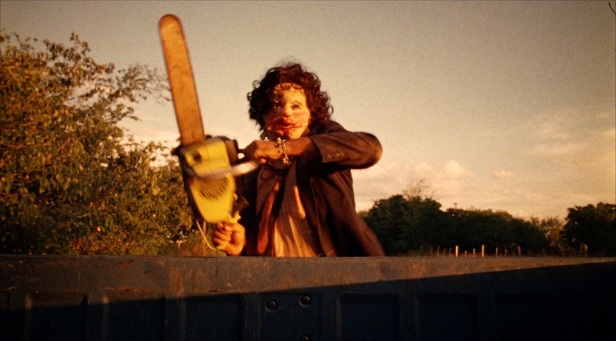 We witness the now famous dance as Leatherface spins around in the middle of the lonely street, swinging his chainsaw. And he spins and spins. His brother is dead. The girl who caused his death has escaped and he does not know how to process this other than to dance with his chainsaw in a psychotic rage. Hooper’s follow up, Texas Chainsaw Massacre Part 2, decides to take on a more openly comedic stance to the horrors of the Sawyer family. While I appreciate the sequel, it’s the first film that I think truly blurs the line of whether or not Leatherface can be treated as a maniac or as a sympathetic monster.

I don’t expect to change too many minds with this article. Leatherface will always be a beloved horror film character, but I don’t think too many people are as quick to defend him as I am. He may be a hulking man with a human skin mask and an apron, but, to me, he’s someone that deep down, you can feel compassion for. If those youths had not come across the Sawyer farmhouse that day in August, there would be no chainsaw and there would not have been a massacre. Leatherface would have continued to live his life of domesticity and isolation with his family.

So, in summation, if you’re ever down in Texas, make sure to get some barbeque and stay away from any farmhouse where the faint sound of a chainsaw can be heard. There are just some places that aren’t worth exploring.

– Andrew Guthlein, known as the self proclaimed King of Horror, co hosts a weekly call in horror movie talk podcast called “Talking Terror”.  He is live every Wednesday from 9 pm est to 11 pm est at www.blogtalkradio.com/talkingterror. Andrew dedicates this article to Tobe Hooper who passed away recently. Tobe may be gone but the Saw is forever.