Skip to content
Date: May 5, 2017Author: Horror And Sons 0 Comments

I’ve been a huge fan of I Bury the Living ever since I first watched the film about 10 years ago. It was included on a set of classic, black & white horror films that I had recently received as a gift. While the set was filled with legitimate genre treasures such as Nosferatu, Night of the Living Dead, & House on Haunted Hill, I truly believe that what the distributor really meant by “classic” was “public domain”.

I instantly fell in love with the film. It was simple, yet highly effective. It has since become one of my favorite films of the horror genre and is now watched at least once or twice a year. So, when Scream Factory announced that the film was coming to blu-ray, I knew that I had to have a copy as soon as it was released. I wasn’t sure how much of an improvement the HD transfer would be over the SD copies that I had become accustomed to, but I undoubtedly had to give it a shot. I do admit, though, that I wasn’t expecting a $20 price tag at release. Okay, fine. The Brain That Wouldn’t Die had a great blu-ray release. I’m sure this will be close to that, right? 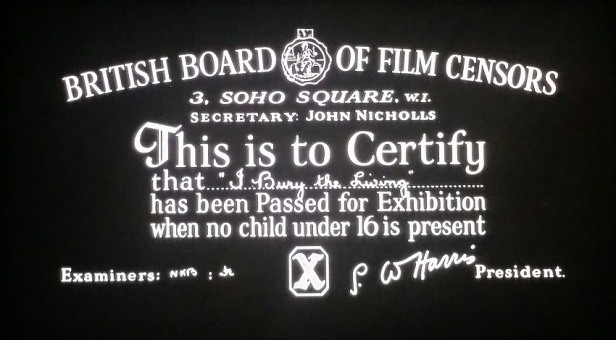 I Bury the Living was directed by Albert Band, the father of Full Moon’s Charlie Band and composer Richard Band. While Band would direct a few other genre films, such as Dracula’s Dog and Ghoulies II, he was much more known for producing films for son Charlie’s Empire and Full Moon lines, such as Troll, Terrorvision, and Metalstorm, as well as Disney’s Honey, I Blew Up the Kid. The film was written by Louis Garfinkle, who would later be nominated for an Oscar for co-writing The Deer Hunter, another film that vividly features characters losing their shit.

The film stars Richard Boone, who at the time was freshly into his role as “Paladin” on the long-running western “Have Gun, Will Travel“, the role he is undoubtedly best remembered for. Boone stars as “Robert Kraft”, a successful department store manager with a happy life and loving fiancée. Kraft inherits the chairman position for a committee consisting of other successful businessmen who, for whatever reason, oversee the upkeep and operation of a large cemetery. As part of the obligation of his new position, it is now Kraft’s duty to manage the cemetery’s daily operations. They consists of arranging burial plots for the town’s fine folks, and then making sure that the plots are filled properly when those same fine townsfolk do indeed eventually die.

Upon receiving the position, Kraft visits the cemetery. Currently burdened down due to the obligations of his everyday job, Kraft initially intends to sell the cemetery. He is greeted by the cemetery’s caretaker, Andy (Theodore Bikel), who Kraft intends to have retire, albeit with a decent pension. Andy shows Robert to the manager’s office, a rundown old building with no heating. In the office waits a map of the cemetery and all of its assigned plots. Purchased plots are marked with a sole white pin, which is then replaced with a black pin upon the owner’s demise.

As Robert is preparing to leave the cemetery, a young newlywed couple pull up in front of the office in the groom’s convertible roadster. He informs Kraft that they have been willed two burial spots as part of their marriage, and hands him the deed to the plots. People willed away some odd shit in the “old days”. As they drive off, Kraft returns to the map to mark their newly obtained spots. Paying little attention to the mundane task, Kraft inadvertently marks their burial plots with two black pins.

The next day, Kraft is informed by Andy that the couple were killed in an auto accident shortly after leaving the cemetery. Kraft prepares to mark their plots with the appropriate black pins, but is informed by Andy that the black pins were already there. Instantly, Kraft begins to feel some guilt for their deaths, although he doesn’t really believe the situation to be more than morbid coincidence. Before leaving, he randomly replaces a white pin from the map with a black pin, a test to prove to himself just how silly and foolish he’s being.

As before, the person marked with the black pin dies a sudden death. Kraft is mortified (cemetery humor), and now fully believes that he is responsible for these deaths. He tells friends and colleagues of what he believes is happening, but they too laugh it off as nothing more than happenstance. Not believing Kraft’s claims, they coerce him to replace more pins, believing that when those marked remain alive it will help Kraft to overcome the guilt and despair that he has become mired in.

Not an attractive man to begin with, Richard Boone is able to convey Kraft’s descent into guilt-ridden madness and depression with little more than the quality of his face. Layered in make-up early in the film and filmed under brighter lighting, Boone’s facial appearance becomes increasingly more gaunt and sunken throughout the film simply by removing the make-up layers at a time or changing the position and level of set lighting. By the time the film reaches its final act, Boone looks as though he hasn’t eaten, bathed, or slept in days. And as “Robert Kraft” presumably hasn’t done those things, the effect is perfection.

What makes I Bury the Living “work” still to this day is that it bases its horror in our perception of our own humanity. What would we do in this situation? Would we abuse this power to destroy our enemies or would we also be destroyed by the guilt? Granted, as this is a film from the 50’s, there weren’t many “anti-heroes” dominating the screens, so our protagonist is naturally a decent person with no ill-intent towards others. 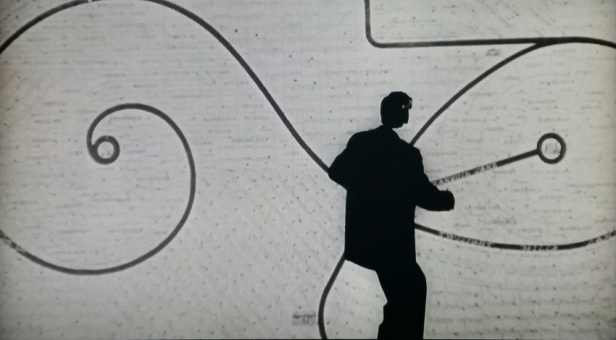 The HD transfer is quite clean and sharp, especially when compared to the countless Standard Definition public domain versions that have littered the market for years. However, the film now has a much brighter appearance than I remember. The image seems too bright at times, giving a few short distance shots of faces a mildly washed-out look. While never a major distraction, it is noticeable.

Also of note was some telecine wobble early in the film. What that means, for those unfamiliar with the term, is that film moved during scanning, thus making the image appear to shake or “wobble”. This goes on for quite a few seconds and was actually mildly disorienting at times.

Audio is presented via a lossless DTS-HD 2.0 stereo track. In other words, it’s nice and loud, and features much deeper bass than I have heard in any other version of the film I have watched. This is exceptionally satisfying in regards to the film’s score, as composed by Gerald Fried. Featuring a mix of deep tubas and shrill, stabbing high notes that add a nice layer of “intensity” to the film’s already morbid subject matter, the soundtrack pops pleasantly. 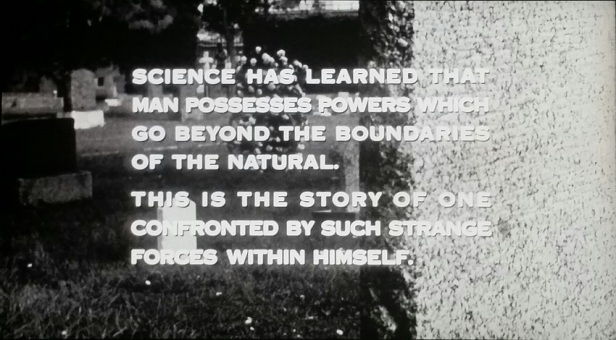 Where the disc was a huge disappointment for me was in the Special Features department, or lack there of. Included on the disc are the film’s original trailer and an image gallery. Now, I know that as a 60-year old film, there aren’t going to be many people who were associated with the film that are still around today, if any. That said, there are plenty of film historians or even “Who the Hell are you?” film reviewers with a huge love for this film that could easily be obtained to talk ad nausea about this film. One of them is even writing this piece right now!

Really, anything extra would have been a plus. As is, the release is pretty barebones.

I Bury The Living is one of my favorite films in the horror genre. I could give countless reasons as to why you should give this film a chance, if you haven’t, but this review really doesn’t need to be 3,500 words long. It’s a great piece of classic horror cinema that arguably deserves more respect than it receives.

Scream Factory has presented a large visual upgrade over what viewers have been given for years on all those multi-movie sets, albeit with a few minor blemishes. Audio quality is leaps and bounds over what you’ve heard for years on all those same budget, SD releases. However, just like all those other dump bin DVD versions, you aren’t getting much more than just the film itself.

At an initial price point of $20, the blu-ray release is going to be a hard sell to anyone other than the film’s most ardent fans (like myself) or the most dedicated of Scream Factory fanboys. Yes, they definitely exist. Casual fans will want to wait for a sale.