Warning: Do Not Operate Heavy Machinery While Watching This Movie

I started watching the movie at my desk near the end of my work shift. I was pretty sure that I had caught whatever “funk” my son had gotten sick with over the Thanksgiving weekend and I was going to try to fight it by taking some cold medicine that my co-worker had given me. She assured me that it was non-drowsy. It was not. At least the active chemicals were decent enough to let me get through most of my drive home before deciding to become…. well, active.

I had only made it through the first 6 minutes of the film before I shut down the office and left work for the night. 6 minutes. This movie was just beginning. There was no reason to be worried by the fact that nothing had really happened up to this point. Hell, they were still working their way through the credits 6 minutes in. What could go wrong?

The movie opens with a scene of a young man in a small room making a mold of his own face. We immediately cut to the same young man, John, in a doctor’s office. John is being released from a mental hospital. As his release is probationary, he is released into the custody of his aunt. I would love to give you more background here, but that’s all the info that we get from this intro. John hops on his motorcycle and drives away from the hospital. I also don’t know how long John has been in this hospital, but it’s nice to see that someone was taking care of his bike, if it indeed was a long stay.

John’s aunt, Marta, is played by Viveca Lindfors. Lindfors is best known to horror fans as “Aunt Bedelia” from the “Father’s Day” segment of Creepshow. Marta lives with her 3 young, attractive daughters. Once again, this is all we know about these characters. Sensing a pattern here?

Let’s just explain the plot while we can. John inherited a large sum of money when his mother died. Marta had John sent to the mental hospital to keep him from getting control of that money, and was using it to spoil herself and her daughters while John was locked away. Now that John is out, it is time for him to seek his vengeance against his aunt and cousins. Sounds like a thrilling set up, right? Well, it could have been. The problem is that the film makers wait almost 50 minutes into their 90 minute film to tell you any of this.

So, what is happening in the 50 minutes that it takes to find out just what this movie is actually about? Oh, shit. Who knows? I was pretty wrecked on cold medicine by this point. All I know is that it was all very grey and gloomy looking, and I was fighting the sweet embrace of a “nightime, sniffling, sneezing, coughing, aching, stuffyhead, fever, so-you-can-rest medicine” coma. The kind of sleep you can usually only get from watching The Happening.

We get a look at John’s sense of humor, his idea of comedy consisting of scaring a woman by pretending to rip out his eyes. A few scenes later, John convinces the same woman’s husband to hold his twig while he pisses by pretending to have broken arms. He even gets the guy to shake him off. Maybe John needed to be locked up after all.

There is a scene where John gets a job on the killing floor of a slaughterhouse , but he quickly quits the job saying that “he’s learned enough”. Well, that’s disturbing. At first, I thought that someone had dropped the ball on a background check. However, the more that I thought about it, I became convinced that HR nailed it. Nailed it through the back of the head. And I should note that there are a couple of slaughter scenes here that will just piss animal lovers right off.

There are also a few scenes to show us that John is sleeping with at least 2 of his cousins, if not all 3. Yet even these scenes are a big, bizarre, blurry bore as they consist of nothing more than characters sitting around while home movies of them as children are projected on a wall in the background. There might have been something interesting said in the few exchanges of dialogue in these scenes, but we will never know because the audio on the film sounds like it was post-recorded by Charlie Brown’s teacher.

And that’s it. Even when the film finally decides to let us know just what the hell this giant, gloomy, grey wad of zzzzzzz is all about, it then decides to spend another 25 minutes doing nothing. Seriously, nothing. This big “payback” that John has been planning this whole movie? Yeah, last 15 minutes. And then guess what? This sorry bitch doesn’t even go through with it. 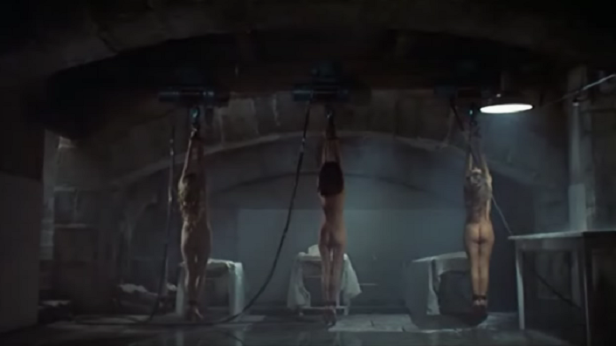 What? Did I just force myself to stay awake for even more nothing happening? No. No, that can’t be. This whole time I could have been dead to the world, deep in my pharmaceutical dreams of playing air hockey in outer space with Johnny 5 while Isaac from The Love Boat serves me drinks filled from a fountain of cascading pina colada. But no, instead I’m spending my time watching movies like this so that I can write these little reviews for a site that no one actually reads. FML.

Can I recommend this movie? Well, sure. It will help guide you into a good night’s rest quickly and effectively. Don’t think it will do much for your sneezing and runny nose, though.

As I wrap up this review, some of you may be wondering where the titular bell comes into all of this.

The bell! Right! Back on topic….. the bell really plays no part in this movie. You see it being transported by truck and then by oxen early in the movie. And you see it again in a church late in the film. I believe that the name comes from an incident on the set during production. And on that note, I exit with……

Fun Fact: On the last day of filming, director Claudio Guerin fell from the bell tower and was killed. I guess there was nothing particularly “fun” about that. Especially for Guerin.