If you have been enjoying the Halloween Horrors series, then Thomas Bryce of Shit Movie Fest is the person you want to thank. I unabashedly stole the idea of a series of reader submitted posts from his annual “25 Days of Shitmas” event, an event that I was honored to contribute to last year. Actually, I stole the idea from Dr. Jose of Camera Viscera when he had his Drive-In Double Feature series last summer, but as he admittedly stole that idea from Shit Movie Fest, I feel no guilt or shame.

For his Halloween Horrors debut, Thomas really hit a soft spot with yours truly by submitting a piece on one of my personal Halloween favorites.

Tales From The Darkside: Trick or Treat!

Recently I was shopping for some new Horror DVDs or Blu-rays to binge on during this Halloween Season. After finding some good scores at a F.Y.E., I hit Wal-mart and came across the complete run of the classic 80’s anthology series, “Tales From The Darkside”! “Tales from the Darkside” was a show I remember seeing select episodes of as a kid here and there, but I don’t really have any fond memories of it compared to similar shows such a “Tales from the Crypt”, “Monsters” or “Friday the 13th: The Series”, but seeing that boxset sitting there I knew immediately this was something that my Horror Collection was severely lacking!

So far I managed to finish the First Season of “T.F.T.D.” and while I have sadly found a good amount of the stories in that season to be some real stinkers, the ones that I have enjoyed has already made the set well worth owning!

One such episode that I loved was the Pilot episode, a Halloween themed tale dubbed “Trick or Treat” that was written by George A. Romero and originally aired on October 29, 1983!
I’d been thinking up ideas so I could partake in Horror and Son’s 2nd Annual “HALLOWEEN HORRORS” event and decided why not do a write-up about this pilot episode, and share why I think you should find a place for this tale in your Halloween TV rotation this season!

“Trick of Treat” starts off with two accountants doing an audit inside a darkly lit room of a small town’s General Store. The men punch numbers with the owner “Gideon Hackles”; portrayed by actor Barnard Hughes, who’s best known as the “Grandpa” in “The Lost Boys”! Gideon is a live action version of Scrooge McDuck, a real penny pincher that even charges the Dad from “ALF” four cents for an extra cup of coffee! The two accountants discover that practically the whole town is in some sort debt with Gideon as they look over the countless amounts of IOUs that he has garnered over the years! As the session comes to an end Gideon tries to scare the men with some cheap Halloween decorations, reminding them that it’s Halloween…. his favorite season! 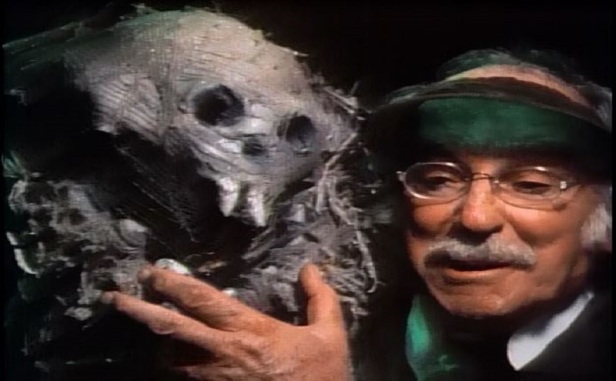 The next morning is Halloween Day and Gideon is at the store when a farmer, and his son Billy, comes in to pay the family’s debt. It’s revealed that Gideon has this guy’s farm as collateral, but tonight there’s hope for him and all the people in the town in the same predicament! Gideon has a weird offer that can potentially erase any and all their debts! The tradition is that he hides all of the IOUs throughout his house and instead of giving candy out on Halloween, the town’s children have an opportunity to enter his property and try to find their family’s debts! Some of the family’s are against this twisted idea, like the farmer who shoots him down, while others pretty much force their kid to enter the home out of desperation! One such guy is Victor Muldoon, who reveals that he’s been toughening up his son Tim this year to beat the old man at his game!

As the night draws near, Gideon is seen hiding the IOUs and setting up some scares for the incoming trick or treaters! Gideon sits in a room and speaks over a loud speaker as the first kid, “Beth”, enters the house. Beth lasts about a minute as she’s scared out of the house by a goblin prop rigged to pop up from the ground. Next up are a pair of brothers who leave due to a corny looking bat flying at them. The fourth kid to show up is young Tim, with his father (Victor) outside egging him on. Timmy lasts the longest in Gideon’s game of “Hot or Cold”, but still fails at his attempt to clear the family’s bebt! With seemly no more children coming to the house that night, the old man starts to clean up the house, but things around him start going haywire right before his eyes… and just then he hears a knock at the door . . .

At the door is a witch that Gideon tries to shoo away, thinking it to be an adult trick or treating and not a child on Halloween. The witch, ignoring his request, floats on past him and starts to bring all of the Halloween decorations to life, as well as stealing his coveted money & financial records! All of the this leads Gideon to break down as he finds himself led by demons to a red lit room with the Devil himself leading him to Gates of Hell! 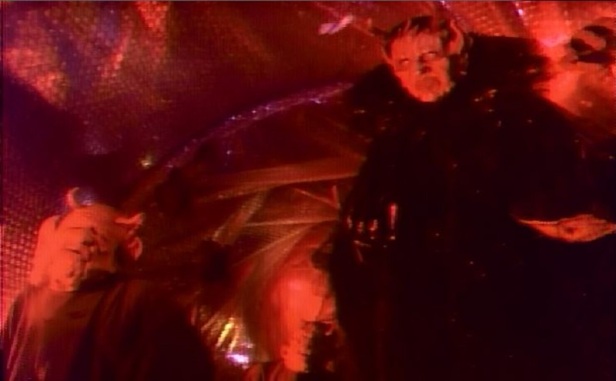 The tale wraps up with Billy walking through a cemetery, heading to the Hackles house against his fathers best wishes. When he knocks on the door, he is greeting by the witch, who gives young Billy all of the town’s debts, as well as some jewels and money. On Billy’s way home, we see Gideon’s tombstone saying simply that he was a “Businessman”!

I thought that this tale was fun and a great way to kick off the series. I absolutely loved Barnard Hughes in this and his character was in a lot of ways similar to how he was in “The Lost Boys” . . . super grumpy, but still quite humorous! I also enjoyed all of the homemade props and decorations scattered about throughout this episode. They really set the tone and make the atmosphere truly spooky! The one thing I’m finding while watching these episode on disc is that they all feel slightly rushed. With a 22 minute runtime, I don’t think that the stories really had much time to be fleshed out, because next thing you knew they are over. This tale in particular is one could have easily fit into a 45 minute Special or something!

While I’d say that Season 2’s episode “Halloween Candy” is the superior of two Halloween themed episodes that “Tales from The Darkside” has to offer, I would still put this on your short list of things this watch this Halloween due to the significance of it being the very first episode and for Mr. Hughes’ acting. Heck watch them back to back for a solid double feature!

Have a Great Halloween season, everyone…. and Special Thanks to Dustin for allowing me to partake in this year’s “HALLOWEEN HORRORS” Event!
– Thomas Bryce
https://www.facebook.com/ShitMovieFest/
https://www.instagram.com/shit_movie_fest/