Mario’s Brother Ripped Us Off

In 1978, Italy director Luigi Cozzi (as Lewis Coates) directed “Starcrash“, a low-budget cash-in on the then current, blockbuster success of “Star Wars“. More of a western in space,”Starcrash” had its own share of success. It was only logical that the next film that he directed would also be a take-off of another popular sci-fi hit of the time, 1979’s Alien. Ridley Scott managed to make a classic tale of terror beyond the stars, merging science fiction with a touch of gothic horror. Cozzi opted to bring the story to Earth, primarily focusing on the other aspect Alien is best remembered for. Chest bursting.

A shipping vessel from some undefined South American location drifts into dock in New York. The boat appears unoccupied. NYPD Lt. Tony Aris (Marino Mase’ – The Godfather III, Tenebre) is assigned to the scene. He boards the ship in the company of some men that I’ll just assume to be port authority. They may have said, but I wasn’t really listening. Trust me, it’s not important.

They soon find the bodies of the deceased crew. Each one lay in a tangle of ripped flesh, their bodies having essentially exploded. They also find the ship loaded with boxes marked as an export shipment of coffee. When one of the boxes is knocked over, they instead find what looks like large avocados. They aren’t. They are an extraterrestrial life form. Hopefully, you knew this by now. I apologize if I spoiled a movie that’s you’ve had 35 years to see. A movie with the word “alien” in the title. 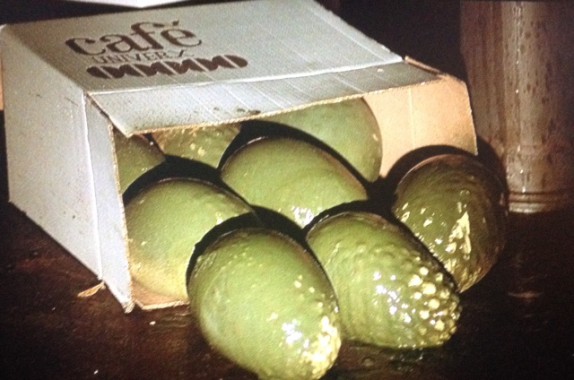 One of the “guacamole nuggets” rolls under a nearby steam pipe. The heat accelerates its incubation causing it to not only ooze, but also to start glowing and throbbing. Naturally, everyone wants to poke at it and touch it. Ya know, cause glowing fruit is a normal occurrence. One of the men is like, “Hey, I’m just going to pick it up. Seems safe enough.” And rightfully, that shit blows up in his face. The “egg” splashes out a putrid, dark green juice that covers all of the men, except Tony.

Fun Fact: Avocados are actually fruits. Did you know that? I didn’t. They’re actually part of the berry family. Go figure.

This instantly causes them all to start swelling and expanding until they finally explode in some of the bloodiest, chunkiest, intestinal “money shots” ever committed to film. It’s the “Peter North of Gore”, continuously blowing its load across the screen. You got some in your eye.

Tony is detained in a military quarantine chamber. A government agent, Stella (Louise Marleau), comes to talk with him regarding the incident. She is a Colonel in Internal Security, reporting directly to the President.

After some study, it’s determined that they aren’t actually eggs at all, but more along the lines of some bacterial bomb. This is also kind of irrelevant as they continue to call them “eggs” for the remainder of the film. To demonstrate the effect of the eggs, and to give us some more carnage, the “juice” from the egg is extracted and injected into a lab rat. The rat also quickly explodes.

It is somehow determined that someone may plant these eggs in the city sewers as the heat from the sewer gases would serve as an incubator. They fear that the exploding eggs would blow up the city. Um, no. I don’t think that’s how that works. The eggs don’t combust. They spray out a liquid that causes living tissue to explode. Yeah, we’ll probably lose a shit ton of rats and maybe a few C.H.U.D. in the incident, but that doesn’t seem like much of a loss. I would think that the bigger issue would be from it seeping into our water supply, but it’s 1980 and no one will be concerned with saving the Earth for another 10 years. That’s when Captain Planet made his debut.

Military scientists find the “eggs” to be silicone-based instead of carbon-based. This leads them to believe that the eggs are extra-terrestrial in origin. By that logic, most fake boobs from the 1980’s & 90’s are also extra-terrestrial. It’s also determined that the “seeds” for the eggs must have been brought back from Earth’s first expedition to Mars. Oh, yeah. We went to Mars.

One of the astronauts, Hubbard (Ian McCulloch – Zombi, Zombie Holocaust) came back from the voyage telling tales of bizarre occurrences while on the red planet. He reported that his partner, Hamilton, retrieved the seeds from the eggs while there and brought them to Earth. Hamilton refutes his story, saying that his friend experienced a case of “space madness”. A committee agreed and Hubbard was discredited and forced to retire. Stella was a member of that committee.

Stella meets with Hubbard to get his story of what really happened on Mars. Obviously, he’s not very pleased to see her, but he tells her the story anyway. This leads to a flashback of those events. The 2 astronauts find an ice cave on the polar cap. The cave opening looks like the gaping maw of some demonic fish, with sharp, pointed icicles serving as the teeth. They find the cave filled with hundreds (perhaps thousands) of the eggs. This scene is also one of Contamination‘s “claims to fame” as olives are used to serve in place of the eggs. You’ll notice that there are no black olives. That’s because even Martians know that they are gross.

Hubbard recalls “something” approaching them from deep within the cave, a bright light emanating from it. He says that the light “changed” his partner, but stops before explaining how. Stella then tells him that Hamilton died in a plane crash 6 months earlier, so they will not be able to interrogate him.

This is followed by an interesting scene in which Stella tries to convince Hubbard to help her with the investigation. When he sheepishly refuses, she basically calls him an impotent, drunken pussy. He pimpslaps her like he was Dolemite, and she’s just replies, “Good. Let’s get to work!”. Yeah, I’m not buying that at all.

The 3 travel to South America. It doesn’t matter exactly where. This whole egg business now appears to be a world-wide syndicate. Everyone is in on it, except the audience. Once again, plot isn’t important here. It’s also revealed, to no one’s surprise, that Hamilton is still alive and living on a yacht in South America. As expected, he’s the head of the egg smuggling organization. The trio head to the coffee factory covering as the nursery for the eggs and there the film sets up its conclusion, consisting of chest bursting, an alien overmind, an even the death of a main character.

Contamination is not a particularly good film. It’s not even a very close copy of the film it purportedly rips off. What sells Contamination is the gore and the heavy reliance on it. Sadly, even the chest bursts start getting a little dull by the end of the movie. Fortunately, there is still enough humor to be found in the film’s ineptitude to make it entertaining for those that appreciate the finer points of “crap cinema”. Worth watching at least once, but those with questionable tastes may enjoy it more.

After receiving a 2K restoration, Contamination now features an impressive level of detail. The chest bursts now look much more meaty and wet than on previous DVD releases. The individual pieces of “chunk” are much more defined.

Grain is noticeable, but never obnoxiously so. While not a particularly “bright” film, grain is much more noticeable in well-lit scenes and almost unnoticeable in darker scenes. I did not notice any black crush or “inkiness”. There are small pops and scratches throughout, but they are never a distraction.

I admittedly did not listen to the Italian audio track, but the English mix is spot on. Highs are high and lows do carry some “thump”. The alien “moans” in particular were both clear and deep. The only issue that I noticed was that flaws in the dubbing were more apparent.

Luigi Cozzi on Contamination: 22:55 – This looks like an older piece from somewhere else.  In SD & subtitled. Cozzi explains the “genesis” of the film. Admits they he was looking for an international hit and not necessarily something “good”. Also admits that he ripped off the story of Alien, but tried not to make the same film. Says he was influenced by Enemy from Space (the 2nd Quatermass film), as well as Body Snatchers and Them (although I don’t get that one)

The effects behind the chest bursts are briefly discussed. I like the comment that it took hours to make actress look beautiful. His words.

Sound of the Cyclops: 11 min- Goblin keyboardist Maurizio Guarini discusses the film’s score and his career making music for Italian horror films. He seems quite appreciative and humble.

Luigi Cozzi vs Lewis Coates: 42-min : New interview. Cozzi discusses his lifelong love of sci-fi. He details his early days supplying articles to American sci-fi magazines. He wrote to Forry Ackerman, who made his a foreign correspondent. Through his work with FFM, he was able to meet some Italian directors, such as Mario Bava, which would eventually lead him into film.

Graphic Novel – Sketched and inked, but not colored. Ehh.

For whatever reason, the blu-ray release is a little more pricey that it needs be. That alone may scare some off, and rightfully so. Fans that do take the plunge will be quite pleased with both the transfer and special features. Casual fans need not apply.