Today’s forgotten relic is 1988’s “Headhunter“. Released to video in 1989 by Academy Entertainment, the film stars Wayne Crawford (Barracuda, Valley Girl, Jake Speed). However, as he presumably wasn’t marketable enough, top-billing went to former “Charlie’s Angel” & co-star of 1985’s “House“, Kay Lenz. While Lenz is the other main character in the story, her character is secondary to Crawford’s.

The movie starts in the small village of a Nigerian tribe, however shooting actually took place in South Africa. The tribe is in the midst of a ceremony. There is music playing and people are dancing. And old priestess rolls some bones near the bonfire. The wind picks up, blowing into the village and disrupting the ceremony. An unseen force has arrived. Or maybe it’s leaving. Eh, who cares?

The setting shifts to Miami. The local Nigerian community are having a large street fair and parade. In a small apartment above a nearby store, a voodoo priest is performing his own ritual, one that involves cutting off the head of a chicken. The same wind blows in again. The “force” bursts into his apartment, knocking down the door. There is the sound of a blade slicing through the air and the man is beheaded. The wound is cauterised by the blade. 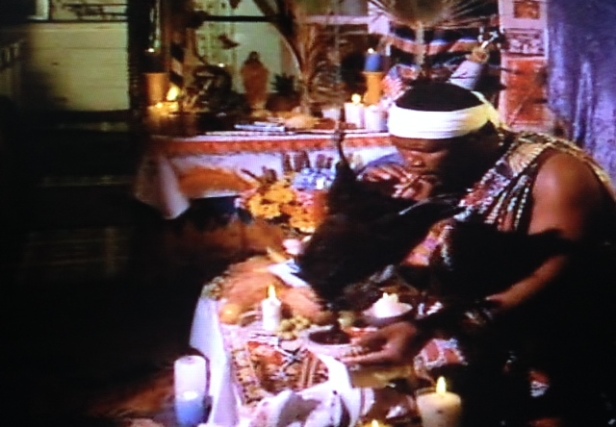 The Evil Dead influence is immediately felt as the “spirit” is filmed in very much the same manner as the “unseen entity” from that film. The “spirit” is portrayed in the form of first-person perspective, and the camera flies around the screen in the same manner as Raimi’s work on Evil Dead. There is even the added effect of people being blown out doors and windows from the “spirit’s” perspective.

Lenz’s plays Det. Katherine Hall. When we first meet her, she is having sex with a fellow police officer. Good for them. They are stopped by a noise coming from outside. They both ready their service revolvers in preparation for a home invasion. A man climbs through the kitchen window. It’s just Hall’s partner, Pete (Crawford). He’s piss drunk and looking to crash on her couch. I feel ya, Pete. Lord knows I’ve climbed through my share of windows while drunk. Sometimes I even knew who lived there.

Pete has been crashing with Hall since his wife (June Chadwick – V, Forbidden World) kicked him out after she left him for another woman. Good for her. And maybe good for Pete too. The house was a wreck. I think the kitchen was wall-papered with strips of old newspaper. Seriously, go look. No, don’t bother.

At first, it seems like there are hints of a previous relationship between the partners, but it is soon firmly stated that there was not, nor was it likely that there ever would be. That’s a shame for “Pete” as Lenz is still quite attractive at this point. She, however, made the right choice as “Pete” kinda looks like the guy from the underwear commercials with Michael Jordan on an airplane.

A few more Nigerian immigrants are killed by the as yet unseen supernatural killer. The city’s Nigerian community know that an evil spirit is behind the murders. A medicine man, Juru, agrees to speak to the police on their behalf. He informs the police that the victims were killer by a demon. The victims had fled to America to escape it, but it followed them here. We kinda know this already.

The next decapitation serves as the film’s lone highlight. A Baptist group are down by a very dirty looking river. Now, I’m not a religious man, but something tells me that dunking your head in this nasty-ass, brown water will help you meet your savior a whole hell of a lot quicker. The Headhunter’s sword comes slicing through the water like a shark’s fin (a la Jaws).  The victim is dragged under the water as the sword chops into them multiple times. It’s pretty funny hearing the string of obscenities coming from the priest as he runs off to his car. “No point using this fuckin’ river again. God damned devil in here!”

A fairly bizarre scene takes place right after this. The detectives meet up with Hall’s cop boyfriend for a few drinks at a local cop bar. Crawford sees Juru crossing the street and chases after him. Not sure why, but whatever. Pete chases him down some train tracks to a run-down building being used as a meat market. There are slabs of meat hanging in the middle of unrefrigerated hallways. Seems sanitary enough.

The spirit, still unseen, pushes him through a door, down a hall, and out of a window. He lands below in a dumpster full of rotting meat. Hall (Lenz) shows up just in time to help him get out. As he never told her where he was going, it’s odd that she would not only know where to find him, but also the exact time to show up.

Hall returns home. She finds a message on her answering machine from Pete. He says that he’s found the killer and that he’ll need her as back-up. She heads to some abandoned buildings to meet him. She hears him calling for her and follows his voice deep into the bowels of the ruins.

She sees a bonfire up ahead. A large group of the local Nigerians are performing what appears to be the same ritual from the opening. The Headhunter appears on a roof behind her. She runs away and the congregation gives chase. She eventually finds herself inside the cabin car of a deserted train. Cornered, she is forced to shoot one of them.

Pete arrives with police back-up. Pete had returned to her home and had replayed the message NOT left by him. He called for back-up and then came to help her. She is uncertain for a bit that this is actually Pete, but she finally believes it to be him. The attacking mob have vanished, along with the body of the man Hall shot. They do however find the headless corpse of Juru.

After breaking into Juru’s house, they find a manuscript on Nigerian religious and magical beliefs. They locate the professor that wrote it. He informs them that the only way to defeat the Headhunter is through dismemberment. This will stop the evil from spreading through its body, whatever that means.

They spend the rest of the film driving around looking for a killer they’ve never seen. When they aren’t driving, they are just hanging out at Hall’s house watching “The Hideous Sun Demon”. Be thankful for these snippets of that film as they are much more entertaining than this film.

The film ends with a chainsaw-on-sword confrontation with the finally revealed Headhunter. The facial appliances for the demon are decent looking enough, but the feet look like clown shoes. I can understand the “anticipation” behind not revealing the Headhunter’s appearance until the end, but the audience kinda expects to see more of him once you display him on the cover.

The final battle itself feels rushed and unspectacular. There is little to no gore to appease the gorehounds and no nudity for people like me. Acting is mediocre at best. Crawford is mildly annoying, while Lenz seems to be sleepwalking through the production. While not unwatchable, there just isn’t much going on in Headhunter to recommend it.