Released in 1985, Charles Band’s Trancers was a modest budgeted, sci-fi story that somehow found its audience not through cinematic release, but by cable broadcasts and video store rentals. The film managed to establish enough of a fan base that when Band started his Full Moon video line, Trancers was naturally one of the first stories that he returned too. And the sequel, Trancers II, is arguably just as good, if not better, than the original and has just as much of a fan base.

Trancers: City of Lost Angels was shot in 1988 as part of an unreleased anthology entitled Pulsepounders, along with a mini sequel to another Empire Pictures film, The Dungeonmaster (Ragewar). The Evil Clergyman, a horror story with Re-animator stars Jeffrey Combs and Barbara Crampton was to be the third feature in the anthology.

The movie starts in Angel City, the Los Angeles of the 23rd century. Trooper Supervisor McNaulty, once again played by Art LaFluer (The Blob ’88, Zone Troopers), arrives at a prison of the future to escort a dangerous inmate, Edlin Shock (Velvet Rhodes) to a higher security facility. Shock is a trained assassin, imprisoned by none other that Trooper Jack Deth, once again played by series star Tim Thomerson. Shock is in confinement after an assault on guards and fellow inmates alike. As they are preparing her for transport, she shitkicks a couple guards and escapes. 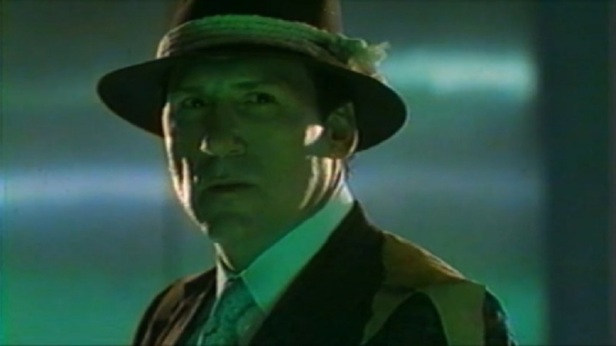 She makes her way into the air vents and from there crawls to the transport engineering room. Not that we see this. We find this out after McNaulty the enters room. As he enters, he finds Shock’s body on a stretcher, her consciousness having already been sent “down the line” to 1988 where she will inhabit the body of an ancestor alive in that time. He resuscitates a knocked out Engineer Raines (Telma Hopkins, Family Matters), who confesses to having been forced to transport her. Before being transported, Shock smashed some record banks, thus preventing them from knowing who her ancestor in the past was. In order to save his life, McNaulty wants to bring Jack back to the future…. present…. whatever. To do so, he has himself sent “down the line”. As you’ll hopefully remember, his ancestor in the first movie was a 10-year-old girl.

According to text that has been added to this scene, the story moves to 1986. Wait…… what happened to 1988? When we are first reunited with them , Jack & his 1980’s girlfriend, Leena (Helen Hunt), are mid-argument, her throwing papers and smashing his coffee mug. Leena here is played closer to her more mature version from the sequels, no longer the punk chick from the first film. She is pissed because Jack has pretty much slacked off for the past three years, essentially playing tourist. 3 years from the original film would be 1988, like I stated earlier. Still confused about that 1986 bullshit. 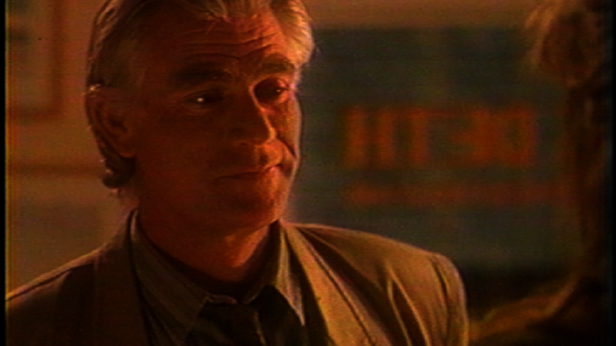 Jack does in fact have a job working as a private detective. Well, maybe not “working”. He has no clients. Leena is his “girl Friday”, but as he has no clients, I’m not sure what that means. Either way, she’s had enough and is leaving. Jack truly loves her, so he let’s her go, but not without first tapping the series staple “long second button” on his watch. For those not in the Trancers “loop”, this is a button on his watch that when pressed slows down time for everyone and everything in the world except Jack. It also only lasts for about 10 seconds. That’s just long enough for him to tell her how he really feels about her before time resumes and he has to let her go.

McNulty, now in his 13-year-old female body, knocks on Deth’s door…. heh heh…. moments later. Like, soon enough that she should have passed Leena in the hall. Kid McNulty tells Jack about the assassin that has come back to kill him. Jack decides to take his chances right here in the 80’s. Not that it’s the 80’s anymore. Alyson Croft, once again in the role of McNulty’s kid ancestor, gets a bigger role this time around and flourishes in it. I’d safely say that this was by far her strongest performance in the series.

They share some Irish whiskey, something that’s not found easily in the future of Angel City. At one point, Jack shoves the barrel of his gun into the face of a man passing by on the fire escape, but lets the man go when he learns that he’s just a roofer that has come to patch a hole in the roof….. in the pouring rain. Sure. Seems like a logical time to do such a thing.

There’s another knock at the door. This time, it’s a rain-soaked young woman. From her dress, to her hair, to her dialog, to her fainting into Jack’s arms…… She’s the stereotypical “damsel-in-distress” from the old  “film noir” detective flicks. This was a “feel” the first film very much tried to achieve, and somewhat successfully, but was abandoned in the later sequels.

After reviving, she introduces herself as LeFay. She says that she’s looking for her little sister who ran off to Mexico to marry some scumbag. Lefay even drove there to break up the wedding. After doing so, she put her sister on a plane back to the States. Soon, the husband started calling and threatening LeFay, culminating in his finally coming to “visit” her at the nightclub where she sings. She asks Jack to let her stay for a few hours. He allows it and she heads to his bathroom to freshen up.

McNulty doesn’t buy her story. She searches the woman’s purse and finds a small pistol. Jack dismisses it as self-defense, remarking that it’s not even loaded.

LeFay finishes up and returns dressed in only a small robe. She says that she wants to lie down. With the push of a button, a bed drops down from out of the wall of Jack’s bedroom. Lefay tries to seduce Jack, but McNulty comes in and breaks it up. McNulty claims to have found something in the woman’s purse, but Jack says it’s just a license. At that moment, the roofer from earlier drops through the ceiling brandish a hammer. Jack and the roofer tussle while LeFay grabs her stuff and leaves, thinking all of this is part of some freaky fetish that Jack is into.

McNulty raises an injector pistol, which fires darts full of the serum that returns these people back to the future. However, kid McNulty is not the shot that her descendant is, and she ends up shooting Jack in the neck. She tells Shock that Jack has been sent back up the line, which he actually has. She manages to hit Shock in shoulder with the second dart before the bed she is laying on retracts back into wall. 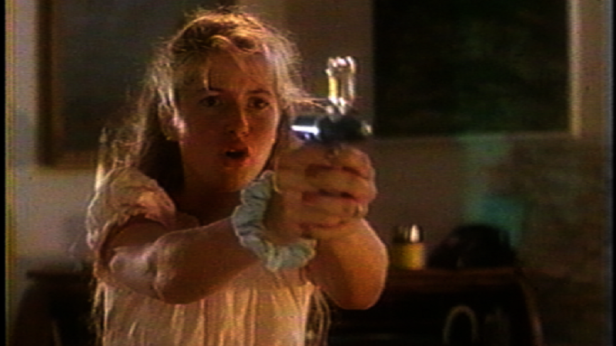 The film jumps back to the future of Angel City. Jack wakes up and hops off the table. (This is in essence cancelled out in the sequel as Jack’s body has calcified during his years spent in the 1980’s, thus preventing him from ever returning to the future.) He has a brief reunion with Hopkins, but Shock also soon revives . Jack and the once again female version of Shock slug it out in the lab. Jack retreats by ladder up a ventilation shaft, but can not escape as the hatch is locked. Shock is steady climbing the rungs of the ladder after him. Jack pulls out a tube of hair grease and coats one of the rungs. Shock grabs it and slips to her death, leaving Jack to deliver the series’ famous “Dry hair’s for squids” line.

Jack is sent back to 1988 again, but this time a couple of hours earlier, giving him time to prevent the fight with Leena and the inevitable break up. The film ends and everyone lives happily ever after. At least, until the “real” sequel. Which was released 20+ years prior. Don’t do the math.

There really isn’t much to Trancers: City of Angels. At 24 mins, it has just enough time to set up the basis story before having to wrap everything up via action sequences in the last 10 minutes. As for the action sequences, those are limited to the 2 fights with Shock in each time period. In reality, it’s a very thin story. It also feels quite odd that there is not a single Trancer in the film.

T:CoLA offers enough to keep the most devoted fans of the series amused and feeling nostalgic. The one thing that I’ve always felt was one of the series’ stronger points was the charisma of the cast and the way that they played off of each other, and that definitely carries over here. Consider this more as “delayed fan-service” than a true entry in the series and you should be pleased.