On VHS From Amazon!!!

When writing these reviews, I try my hardest to make these things, if not “funny”, at least amusing. Part of this is a deliberate choice to not be a boring, stuffy piece that’s over-analyzing the “elements of the film” and instead a light-hearted riff on whether the film is entertaining or not. Part of this stems from the fact that I’m a fairly bored individual, so the reviews give me a chance to clear out some random thought. And SOMETIMES, the movie just doesn’t give you much to talk about, so you just have to make shit up until you are close to the pre-requisite 1,000 words. That’s what’s about to happen here.

Rest In Pieces is a 1987 horror film from Spanish director Jose Ramon Larraz, here directing under the alias “Joseph Braunstein”. Larraz is probably best known for the 1974 film Vampyres (aka Daughters of Dracula), but followed that up with other lesser-remembered horror titles such as The House That Vanished, Black Candles, & the recently released to blu-ray Symptoms, starring Angela Pleasence. Larraz retired from directing shortly after this film, presumably from guilt. Before turning his sights on film making, Larraz was a talented and successful comic writer/artist, a career that he arguably should have stayed in.

Bob is a failed tennis star turned tennis instructor. He’s a money-hungry loser and not much else. As her employment is never mentioned, it’s possible that Helen doesn’t have a job. What she does have, however, are large breasts. Trust me, that’s important. My God, is it important.

The couple arrive at the funeral home for the cremation for Aunt Catherine (Peyton Place‘s Dorothy Malone). While Helen wasn’t close with the woman, she’s still sad to see her pass. She advances on the body for the arguably morbid tradition of kissing the corpse goodbye when the old woman suddenly sits straight up. Helen is understandably startled, but the mortician says that it was caused by nothing more than a chemical reaction. Catherine’s body is laid back down and taken to the incinerator.

As the couple exit the funeral home, a strong winds rips through. And it must be a mighty wind, for it causes Helen to drop the urn carrying her aunt’s ashes. The urn shatters and the ashes are blown by the wind all the way to Catherine’s house, where the woman’s maid and groundskeeper are working out on the lawn. The creepy looking man gets an ominous looking smile on his face. The maid grabs a small pinch of the ash out of the air. She looks at it and states, “She has returned”. A more realistic statement would have been, “Shit! Now I have to dust the damn house again!!!” 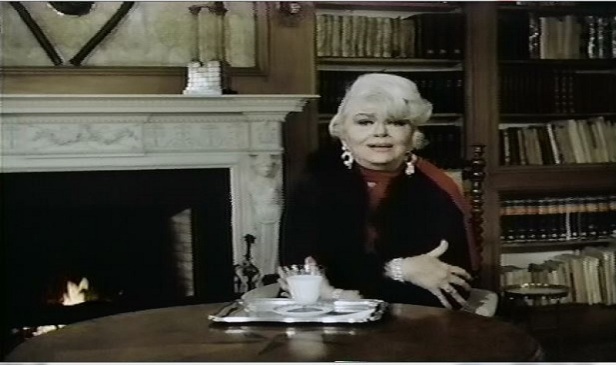 Helen and Bob are next seen at the office of Catherine’s attorney to discuss the old woman’s will. The lawyer plays a video will left by Catherine. In the video, Catherine mentions hating Helen’s mother for having an affair with her husband, an affair that led to Helen’s birth. The resentment was carried even farther when the man was killed shortly after Helen was born.

Despite this, the aunt has decided to leave her house and entire inheritance to Helen. The tape then concludes with Catherine’s suicide, a feat accomplished by drinking strychnine laced milk. Bob is at work daydreaming of all the things he’ll buy with his wife’s newfound riches before the old woman has gasped her final croak on the still playing video tape.

The Hewitts leave the reading and begin the drive through town to Catherine’s estate. They stop and ask for directions from a couple loading a truck with groceries. The woman says that they have been expected and tells Bob to follow them to the house. The man doesn’t say much. Honestly, I don’t believe that he can speak, but that’s never really addressed. A few blocks short of the house, the truck pulls over and the man points out the way for them to continue.

As they arrive at Catherine’s estate, the groundskeeper and maid are already out front waiting for them. The maid says that she recognizes Helen from her aunt’s old photos. She also wastes no time being quite flirty towards Bob. As opposed to the maid’s extremely friendly welcome, the groundskeeper, Louis, seems quite cold and aloof.

In what may be a clever optical illusion, the interior of the house seems vastly more expansive than the exterior. How’d they get all that house in that house? It’s kinda like me at a Chinese buffet. There’s no way I’m going to fit all those steamed dumplings inside my gut, but in they keep going. And true to the cliché, 20 minutes later and I’m building more house.

The Hewitts put up their belongings and settle in for their stay at the estate until the inheritance has been settled. There is some nonsense involving the clothing rearranging itself inside a dresser, but it’s of no substantial significance. What’s more important is Helen revealing to Bob that her aunt was institutionalized for a time after the shock of her husband’s affair and ensuing demise. It’s important to Helen, anyway. What’s important to Bob is removing his wife’s bathrobe and screwing in new territory. Don’t worry, Bob! It’s important to the producers too. Very important. 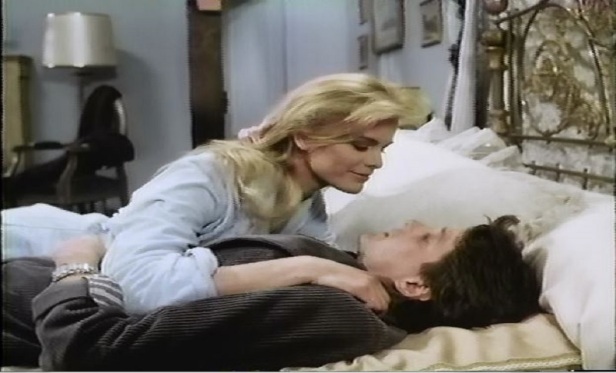 Helen does indeed disrobe for a vital bubble bath scene. Vital. Absolutely essential. As she lay in her bath not actually washing herself, the shower curtains drops into the tub. The curtain wraps around her, suffocating her under the soapy surface. As she fights drowning, she sees her aunt standing above her, laughing at her struggle.

Bob rushes in to save her despite the fact that very little noise was caused by the incident. Helen tells him what she saw, but as the old woman is now flame-broiled, he naturally attributes the vision to shock.

The next morning, we are introduced to the other residents of this small town. These include a psychiatrist, a writer, a priest, and a blind classical musician. Have them all walk into a bar and we might have a great joke in the works. When we first meet them, they (as well as Louis and the maid) are gathered at the local church. The psychiatrist, Dr. Anderson, stands before the crowd and warns the others to tread cautiously until Catherine’s “secret” wishes have been carried out.

Of particular note to this reviewer is the casting of genre stalwart Jack Taylor as “Hume”, the blind man. Taylor has had a long career spanning from celebrated Euro-shockers, such as (Jess Franco’s) Count Dracula, Horror of the Zombies, and Pieces to more recent films, such as The Ninth Gate and Wax. While Taylor has starred in quite a few films that this reviewer particularly enjoys, the man will always be remembered for his amazing, perma-plastered comb-over. Stop reading this review and go watch any of Jack’s 70’s films. No, go. We’ll wait. (We aren’t waiting.) Jack’s mane is the reason that there is a hole in the ozone layer.

1970’s Era Jack Taylor: The Hair Might Not Be Stylish, But It May Prevent Cranial Damage In The Case Of A Motorcycle Wreck

The “concert” proves to be just that, a performance by a small group of classical musicians. However, the event gives the townsfolk a chance to reveal their true nature. It also gives Helen another opportunity to reveal her breasts for some superfluous sex in the now empty house. Might as well give them things the spotlight early because Vail can not act. She delivers her lines with the subtlety of a sledgehammer, while her boobs deliver the performance of a lifetime.

Scenes that seem like they should be leading to “something” fill the gaps between further gratuitous nudity. Helen suffers more minor annoyances at the hands of what may or may not be her dead aunt. The townsfolk continue their evil deeds, although not “evil” enough to just kill these assholes. Bob continues to be a money grubbin’ bastard. Tits continue to tit.

There are a few humorous scenes along the way, although I don’t believe they were intended to carry that way. There is one pivotal scene of brutally-intended slaughter that quickly becomes a comedy of errors due to the use of some incredibly flimsy fake knives. Even the following scenes of gore are too low-budget to illicit more than a couple chuckles.

Helen and Bob finally discover the secret of these sinister citizens, but proceed to not do much about it for an extended period of time. Bob is too busy looking for hidden riches and Helen is too preoccupied with looking for even more opportunities to expose her breasts. Of these opportunities, she finds plenty. They really are nice tits. And really, it’s incredibly gracious of her to share their majesty with us every time she gets out of bed.

The film finally climaxes in a convoluted flurry of resurrections, murders, and double crossings, none of which makes much sense. What makes even less sense is the film’s final scene, which honestly feels like it was scotch taped on since no one knew how to actually wrap up this muddle of a plot in any coherent way. You’d think that the director would have just had Helen unleash the twins again. Hell, that was the approach in almost every other instance of the story’s sputtering.

Despite the weak show from Vail, the other actors deliver credible, if not exemplary, performances. This may be due to the fact that the majority of the other actors were older and had more experience under the belt from which to pull from. Whatever the reason, it just isn’t enough to save Rest in Pieces from the failing of a weak script and a talentless lead. Dem titties tho!!!