Walt (Fred Gandy, better known as “Gopher” on “The Love Boat”) is a criminology student. Walt accepts a job working as a nighttime security guard at “Fred’s Wax Museum”. To help alleviate the tedium of the lonely, late-night hours, Walt decides to build his own “Crime Computer”. Most people just read books or start their own horror movie review site, but Walt is a little more creative than most, I guess. (And a hell of a lot smarter than the ones with the review sites.) Upon starting up his creation, the machine emits “oscillating vibrations” which brings to life some nearby wax statues of legendary monsters, Dracula (Henry Polic II), Bruce W. Wolf (Buck Kartalian – Planet of the Apes, Gymkata), and Frank N. Stein (Mike Lane – Zebra Force, Demon Keeper). Despite the number of people who each of them may have killed in their heyday, the monsters are revived with a newfound sense of guilt. To atone for their past deeds, they decide to use their powers to fight crime as a group called “The Monster Squad”.

And this was the premise of the 1970’s Saturday morning live-action show, The Monster Squad. While the show only aired for one year (1976-1977), it managed to be memorable enough for fans to still speak fondly of it some almost 40 years later. In its short run, it also managed to be popular enough to spin-off into various forms of merchandise, including toy cars, action figures, coloring books, and even its own board game. Today’s focus will be on that game.

The Monster Squad Board Game was released by Milton Bradley in 1977, near the middle of the show’s run. While the show’s heroes are featured prominently on the box cover and game board, the gameplay has absolutely nothing to do with the theme of the show.

Included in the box are the game rules, the game board, 2 red dice, and 13 colored “pawns” (4 red, 4 blue, 3 green, & 2 yellow). The “pawns” are nothing more than small colored circles of wood. While it would have been nice to see pieces bearing some sort of resemblance to the show’s characters, this really isn’t that big of a deal. Like I said, gameplay has zero to do with the actual show. It’s also worth noting that due to the size of these “pawns”, they make for perfect little choking hazards. So, while the game is best suited for younger players, caution should be taken when smaller children are present. 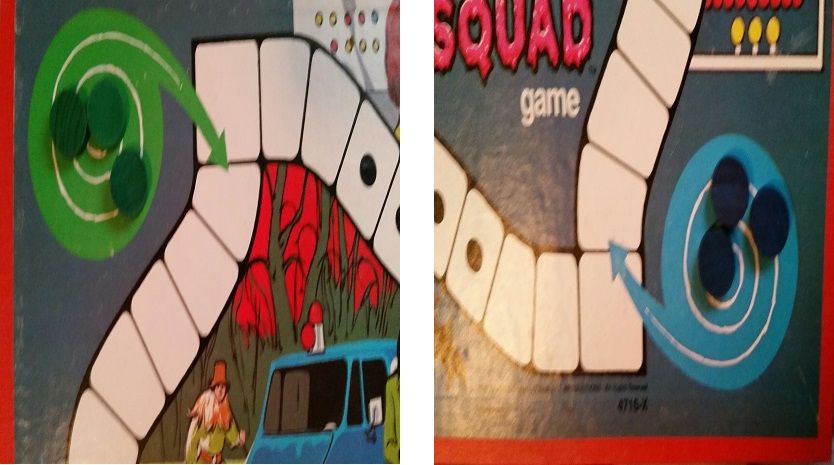 Example photos of 2 of the 4 starting circles, with “pawns”.

It is also worth noting the varied number of “pawns” per color. For a round of the game with 2 players, each player uses 4 pawns. A 3-player game has each player using 3 pawns, while a 4-player game has each player using 2 pawns. As red and blue are the only color to feature 4 pawns, this limits players of a 2-player game to using only those colors. While this should be a non-issue to more mature players, it could lead to some complaining from younger players. Especially those spoiled lil’ shits. In other words, if your kid is insistent upon being Yellow, they’d better have 3 friends ready to play with the game with them. 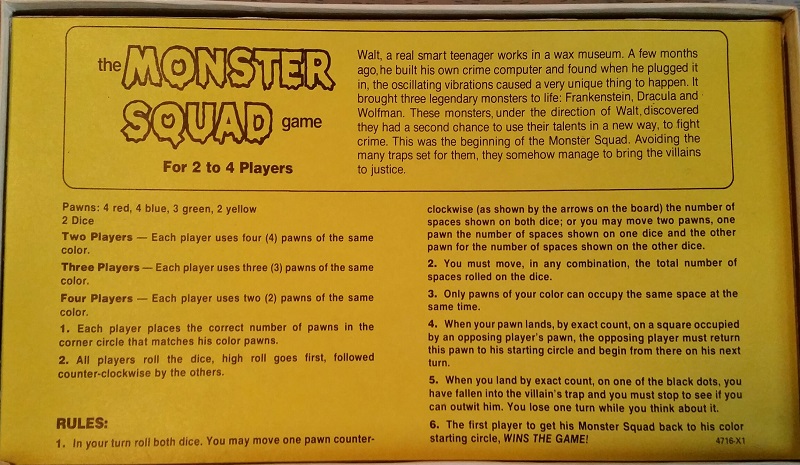 GAMEPLAY: Players start in their respective colored circle. The winner is the first player to successful move all of his “pawns” completely around the board back to their starting circle. Players take turns rolling both dice. Players may then move 1 of their pawns the full number rolled on both dice OR they can choose to move 1 pawn the number shown on one die and another pawn the number shown on the other. A player may move any pawn of their choosing, but can only have 1 of their pawns in a “square” at a time. So, if a player decides to split the roll between 2 pawns, they must land on different squares.

In a game rule reminiscent of Sorry!, if a player’s pawn lands on a square occupied by an opposing player’s pawn, the opposing player must return their pawn to their starting circle. This is where most of the “fun” comes in as everyone loves crushing their opponents, as well as the aspirations of their friends. This is also where some sense of strategy plays in as players may choose to deliberately split the roll in order to stop another player’s advancement as opposed to (as well as in addition to) focusing on their own. 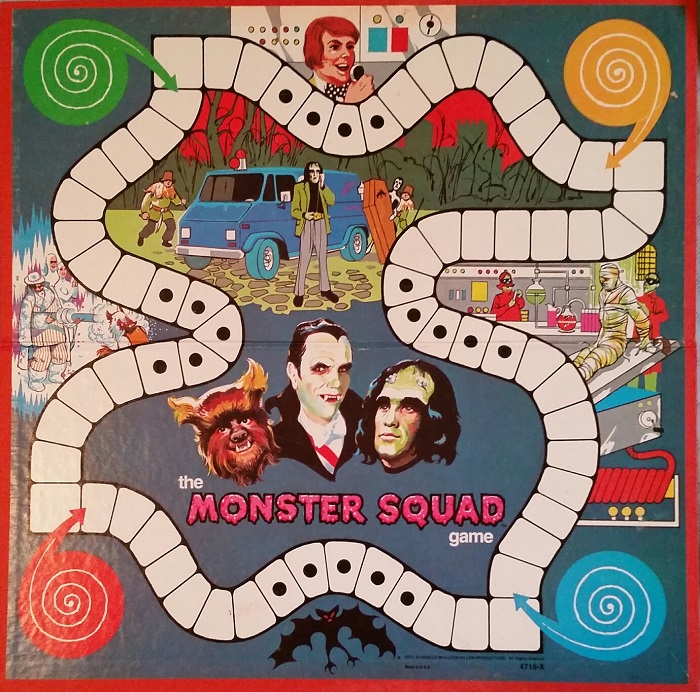 The black dots on the game path are “traps”. If a player lands on one of these spaces, their turn is over. That player will also lose their next turn. This is another moment where some strategy comes into effect. Players may choose to split a roll between 2 pawns if the combined roll will mean that a single pawn being moved results in its landing on a trap (or vice versa). During one of our play sessions with the game, a roll meant that moving one pawn (as opposed to two) would have landed it in the midst of an opponent’s cluster of pawns, thus making it more likely for them to land on my pawn with their next roll. Instead, I placed my pawn into a trap (and sacrificed my next roll) in order to keep it from being in my opponent’s path.

Average gameplay time was about 20-30 minutes a round, although that time may be shorter or longer depending on the speed in which the players take their turns, as well as on the number of players per round. In other words, if you like to “shit talk” your opponents while you play, then the game may take longer. 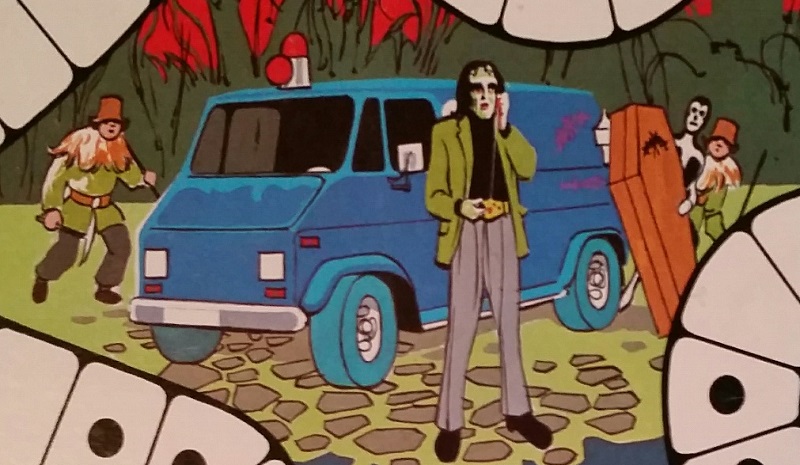 Despite the lack of real connection to the show itself, The Monster Squad is still a pretty damn fun way to kill some time. It might not be the game that adults will want to play all night, but their is still quite a bit of entertainment to be found. Younger players may enjoy the game more than older players, although it may be initially confusing for significantly younger players. Even then, it’s fairly easy to pick up after a round or two.

While I’m not sure that I’d call this game “rare”, there were not many copies available for sale online at the time of this writing. What was of significant notice to this reviewer was the current going price. I originally purchased my copy as a birthday present for my wife in early January 2016. The copy that I have does have significant damage to the box (scuffs, chips, and stains), but the game board was in perfect condition. The copy I have came short one red pawn, but oddly, there was an extra yellow pawn to make up for it. This means that during any 2 player games, one player is forced to use a 4th pawn of a color different to the 1st 3. I mention all of this to bring us to the price. I was able to obtain my copy of the game for $18 shipped, although this was after the seller accepted a low bid that I honestly expected to be declined.  In researching the game for this review, the cheapest copy that I was able to find was $40, although it does appear to be in better condition than my own. 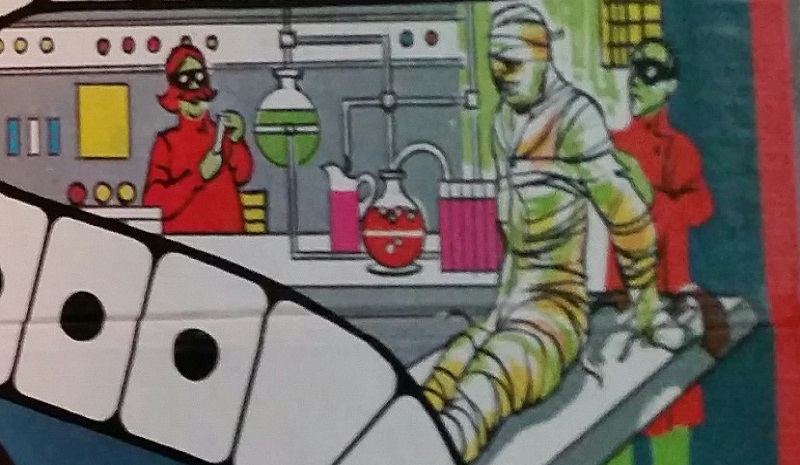 As for gameplay itself, I can not justify the $40 price point. However, the vintage nature of the product, as well as the nostalgic ties for fans of the TV series, do help justify the price at least a little more. As with as all pieces of memorabilia or vintage collectibles, it is up to the buyer to determine just how much the item is worth to THEM for themselves. As for me? Yeah, completely content. 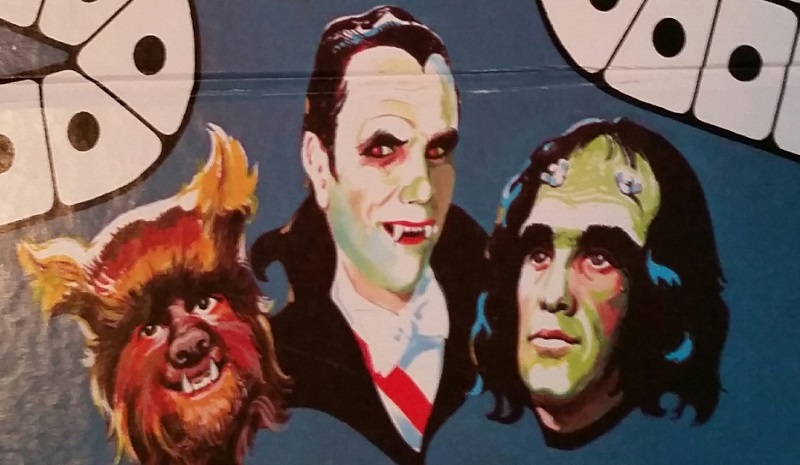