Click Image To Purchase Land of the Minotaur From Amazon!

Some Men Just Weren’t Meant To Be Heroes

They say that you shouldn’t just a book by its cover. And that metaphor generally holds true… unless we are talking about comic books. In that case, you should definitely judge the book by the cover, usually because the cover is the coolest part. But what about movies? Should you judge a movie by its poster or its cover art? The answer to that is also a “probably not”, at least not in the case of 1976’s “Land of the Minotaur“.  Judging from the poster art shown above you might be led to think that this is an action-packed thriller bolstered by the casting of  2 undeniable legends of the horror genre, Donald Pleasence and Peter Cushing. And without a doubt, Land of the Minotaur does indeed bet its entire bankroll on the presence of these 2 icons. What is fails to do, however, is give them more to do with their screen time than stand around looking disinterested and embarrassed.

Pleasence stars as “Father Roche”, an Irish priest running a mission in Greece who has taken to investigating a series of tourists that have gone missing while visiting the ruins of an old, Pagan temple nearby. Father Roche believes that the disappearances are due to foul play. And, in fact, he is correct. There is no mystery as to what has happened as we see these missing folks sacrificed in the opening scene by a cult that worships a large, fire-breathing minotaur statue. As also seen in the opening, the cult is led by Cushing. So, it’s not a “spoiler” when I say that he’s the “bad guy” in this movie.

Why someone felt the need to give the minotaur statue a penis is beyond me, but you’d think he’d be a little more well-endowed.

A group of young archaeologists arrive at the mission. From their greetings, it would appear that they know the Father from previous trips. The young couple are introduced as Ian and his girlfriend, Beth. Along with them for this trip is their friend, Tom. Roche invites them all in, offering them food and a place to spend the night. Even though the father has advised against it, the trio sneak out in the middle of the night to drive out towards the temple, setting up their camp in the nearby foothills. As this is a group of grown-ass adults, I’m not sure why there was a need to sneak out. For that, why even accept the invitation? They could have just set up camp there in the first place. Whatever. Moving on……..

In the morning, Ian & Tom venture into the bowels of the temple via a secret, hidden cave. It can’t be TOO secret if these 2 idiots found it. They are soon captured by cult members, all dressed in different colored robes and masks. Picture the KKK doing a Benneton ad. Kinda like that. It’s very festive and colorful, but everyone’s still white.

Beth, meanwhile, has driven into town to pick up supplies from the local market and to mail a letter from Tom to his girlfriend. Leaving the market, Beth meets Baron Corofax, played by Cushing. Corofax owns the land on which the temple stands. This would probably explain why he was appointed the chairman position for this particular cult. Owner’s rights and all. Oh, and he also owns a castle. Why? Because Peter Cushing just looks like he should live in a castle. Beth is also taken captive shortly after returning to the site. 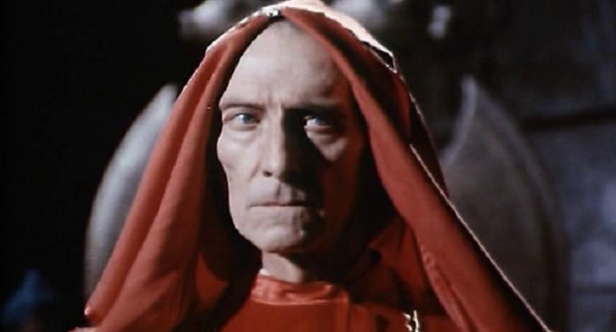 After a minute long scene of an airplane landing, we’re introduced to Laurie. Laurie is the girlfriend that Tom was writing to. Seems that he invited her to come join them on their expedition. As John has only been here one day, I’m not quite certain why they didn’t just go on the trip together in the first place.

When Tom doesn’t arrive to pick her up as promised, Laurie visits Roche. He reads the letter and learns that the group have traveled to the temple site against his wishes. Well, no shit, Sherlock! The Father then calls private detective Milo Kaye. Kaye now lives in New York, but used to live in the area. This really has no relevance to anything, but it’s mentioned a few times.

They speak with the local police, but as expected, this offers them no leads. As they are leaving the station, a woman stops them claiming to know more about the missing tourists. Unwilling to speak in public, she tells them to come to her house later that evening.

After an extended period of characters essentially making small talk to kill the time, we finally get our first scene of anything mildly interesting. Laurie is preparing for a bath when the bathroom door opens. A cultist sticks their masked face in and peers at her. They close the door as another cultist opens a window to get a peek a Laurie. The window watcher retreats and the door ogler reappears. The open/close pattern repeats a few more time before Laurie decides to scream.

Roche and Kaye enter the bathroom and find Laurie passed out in the tub.  That would mean that she would have had to take off her towel, step into the tub, and sit down before passing out. And all before the 2 men had time to find her. Normally, I’d question the validity of this scene, but due to later events, I’m willing to chalk it up to Milo and the Father just being REALLY shitty at being heroes. 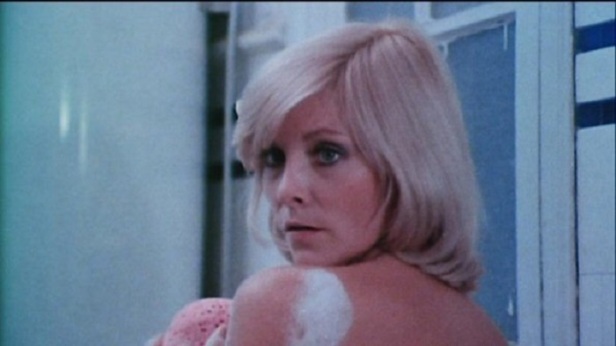 I feel obligated to point out that there is no nudity in the aforementioned scene. And judging from the fantastic figure that Laurie (Luan Peters – Twins of Evil, The Flesh and Blood Show) is hiding under that towel, that’s just a damn shame! However, in the very next scene, she’s wearing some extremely tight white pants as the trio venture out to the temple grounds, thus providing us with a close up shot of the only camel in this desert.

Roche points out the not-so-secret cave entrance and they submerge into the passages below. After a brief time skulking about, they find the sacrificial altar room. A large iron chandelier falls, almost hitting them. They decided to leave and the viewer is left with yet another sequence of nothing of significance happening.

Back at the inn, the bizarre local woman resurfaces, yet again offering some secret revelation. And yet again, she is ran off by the sight of the local constable before divulging that information. Laurie excuses herself for another bath. The constable informs the men that the Baron has insisted upon their presence at his castle immediately. The Baron’s chauffeur escorts them to the castle, neither bothering to tell Laurie that they are leaving. She finishes her bath and, finding both men gone, decides to take a stroll.

The men finally decide to visit the local woman, learning just what the hell is going on from the only person willing to tell them obviously not high on their list of priorities. Their procrastination has cost them as the woman is now dead, strangled in her home. She proves to be the lucky one. She gets to miss out on the following 35 minutes of meandering plot.

Laurie gets chased by members of the cult, but they don’t catch her. A car tries to run down our heroes, but they dodge it with plenty of time to spare. Pleasence sets out some knickknacks. Exhilarating stuff. The story gives itself multiple opportunities to present a thrilling action sequence, but squanders the chances by having each one sputter out before getting started.

Cushing, once again, gives a better performance than the film deserves, while Pleasence appears to be incredibly bored. He does step it up a notch for his scenes with Cushing, but those aren’t many. The remainder of the cast is quite forgettable, although Laurie makes for some decent eye candy. Land of the Minotaur also features a score by the iconic Brian Eno, but even that is used for little more than an inspired scene of a candle being lit.

The film finally reaches it conclusion with Father Roche waging a spiritual battle against Corofax and the cult, but by then, you probably won’t care. There just isn’t enough to keep the film moving from scene to scene, a fact that even the film’s stars have accepted. Despite the presence of 2 of horror’s greatest, Land of the Minotaur is a load of bull.