Buy Werewolf In A Girl’s Dormitory on DVD from Amazon!

Classes Cancelled Due To Fleas

They say not to judge a book by its cover. And that’s usually true. I’ve read a multitude of books that had cover images that pulled me right in, only to have writing that took me right out.

What about movies? Should you judge a movie by its title? Well, no, you probably shouldn’t. Then again, sometimes the title is all you need to pique your curiosity. Sometimes, the title tells you everything that you need to know about the movie. This would be one of those examples.

“Eh. Seen hundreds of them. What more you got?”

“Well, this one takes place in a girls’ dormitory!”

“Potential for some girl on girl action? I’m in”

Sadly, there is no girl-on-girl action or nudity of any sort. Hell, there’s barely a werewolf. 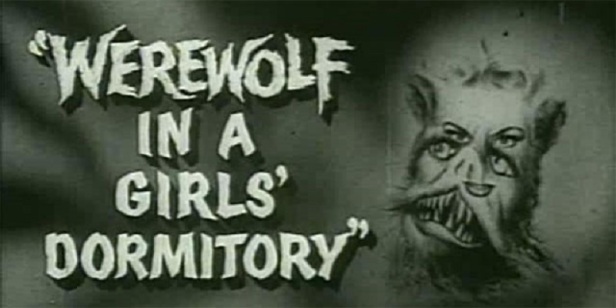 Directed by Paulo Heusch (The Day The Sky Exploded) in Italy in 1961, the film was originally released under the title, “Lycanthropus“. However, as many American film viewers didn’t know what that term meant, and it being a title with no “hook” to it, it was changed for domestic release in 1963. Instead of “lycanthrope” it was changed to the more recognizable “Werewolf” and “In a Girl’s Dormitory” was added not only because it’s a close description of the film’s setting, but because everyone loves the idea of “scantily clad young women”. Only problem is that the “dormitory” is not at an actual school. No, this is much closer to a juvenile detention center. Oh, and no one is scantily dressed. So, yeah, that sucks.

The film opens to find former doctor Julian Olcott arriving at the school. Julian is taking on a teaching position at the school. He is greeted at the gates by the school’s caretaker, Walter, and his dog, Wolf. The actor playing “Walter” stands out due to his close appearance to Peter Lorre. The dog being called “Wolf”? Some may see that as a bit of foreshadowing, but I think someone was just lazy about naming the mutt.

When he arrives, the girls of the school are out in the courtyard doing their daily exercises. As I stated earlier, this really isn’t a school, but more of a detention center for “girls gone bad”. And really, the majority of the 20+ year old “girls” truly look like they belong here. In other words, dem bitches is scary!!! I don’t mean “unattractive” scary. I mean “stab you with an ice pick in the middle of sex” scary. And as some of these girls were sent here for prostitution, that’s most likely when it’s going to happen. No happy ending for you!

Julian meets Director Swift (Curt Lowens – The Entity, Mandroid), the “school’s” equivalent of a warden. Julian has been referred to the school by a Dr. Benson, a colleague of both Julian and Swift. Julian brings with him a secret that cost him his medical license, but that secret is not divulged at this time. Who this Dr. Benson is also never is divulged as the character is never seen or mentioned again. I personally like to believe that it’s actually George Benson. We could all use a little more music in the air and lots of lovin’ everywhere…… so gimme the night.

Coincidentally that evening, 2 of the girls, Priscilla (Barbara Lass) & Sally, are awoken by the sound of wolves howling. They look from the window of their room and watch a another girl, Mary, sneak out of her building. Must be a very minimum security establishment if what are essentially inmates are sneaking out unguarded at all hours of the night. Sheena, wife of the reformatory’s owner, also sees Mary sneak out and follows her. This too is witnessed by the girls at the upstairs window.

Mary jumps the school’s gate and walks out into the darkness of the woods. She soon encounters Walter. Some more foreshadowing as Mary tells Walter to leave her alone. She tells him that he’s “already been paid”. She leaves him and continues off into the woods. She soon meets with Alfred, Sheena’s husband and owner of the reformatory. Alfred has promised Mary that he would grant her release in exchange for some “statutory poontangle”, but he is not meeting his end of the bargain. Mary threatens to blackmail him with letters that he sent her regarding their affair.

Their conversation over, Mary leaves Alfred and walks back to the school. Mary feels eyes watching her and begins to run, but she is quickly brought down by the titular werewolf. Titular. Heh, heh. Hairy hands claw at her face and throat. As she dies, the werewolf rips open her blouse. Even the werewolf was hoping for some T & A. 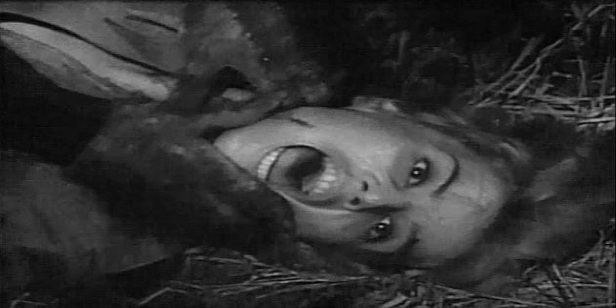 Alfred is brought in to observe the body, but he quickly asks to leave the room saying that this has made him “terribly upset”. Really, Alfred? “Terribly upset” is what I felt when they discontinued the Santa Fe chalupa. If the young inmate that I had been having an affair with were found murdered after having just left my company, my emotions would be more along the lines of “Oh shit! Oh shit! Oh shit!”. He heads outside to smoke a cigarette. He is very nervous, but not too nervous to shoot a creepy smile at Priscilla as she passes by.

Priscilla had just been given a stack of mail to hand out to the other girls. In that stack, she finds a letter to Mary. She reads it and learns that her friend, and former roommate, had been blackmailing someone. As the letter states that “her threats will no longer be tolerated” and that she will “regret it” if she does not cease, Priscilla assumes that the writer of this letter is also the person that killed Mary. She takes the letters to Swift and informs him of what she has discovered.

With the still present police inspector in tow, Priscilla and Swift go to Priscilla’s room to retrieve the letters. Surprise, surprise…. the letters have vanished. With no evidence to prove her story, the inspector and Swift believe that Priscilla has made up the letters in an effort to draw a little attention to herself. As Priscilla is the only attractive one in the bunch, I don’t think she’ll need much help garnering attention. Well, as attractive as one can be with an eagle’s nest for hair. 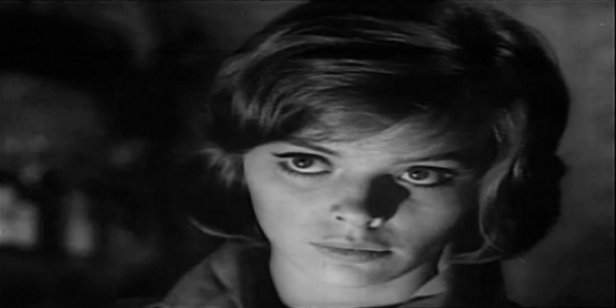 It’s soon revealed that Priscilla was sent to the reformatory after being charged with attempted murder. She used to be Mary’s roommate in town. Mary invited a sailor over one evening, and Priscilla was forced to defend Mary after the sailor started beating her. I think that between the after-hours sailor and her affair with Alfred, it’s safe to assume that Mary was a whore. I would say that she “is” a whore, but she’s dead. So, yeah, “was” a whore. Either way, it’s nice to know that we once lived in a country that unquestioningly jailed young girls for not wanting to allow their friend (or themselves) to be raped. It’s the beginning of the 1960’s, women. Get with it! You will take that forced sex and a beating and you’ll be quiet about it. And then you can make a sandwich and wash some dishes while the man watches “Car 54”.

The remainder of the film plays as a standard “whodunit” with our werewolf only appearing sporadically until the final 30 minutes. We are given a few red herrings along the way, but the true identity of the werewolf is never really much of a mystery. Throw in some nonsensical “science” about canine brain extract and you’ve got a marginally entertaining slice of early exploitation.

Oh, but how it could have been so much more! Hear me out here….

As far as this reviewer is concerned, a large part of what made this movie watchable was that some of the topics being touched on were still pretty taboo for the time. I feel it’s safe to assume that these girls were 18 or under. If they weren’t, wouldn’t they be in actual jails or prisons for their crimes and not a school/reform house? So, it then appears that we are now dealing with issues of authority figures soliciting sex from minors. As I said earlier, statutory poontangle. Throw in some implied prostitution from said underage girls for good measure. Then, there is the killing of minors, since we have now assumed that Mary is under 18. All things that were easily considered taboo for the time.

So, how much more sleazy could this have been had this been made just a few years later? Or what about by today’s standards? This is a movie that’s just screaming for a Skinemax-ready update. Up the violence. Up the nudity. This is a women in prison film, people. Where is my lesbian shower scene? Where are the girl fights? I’m thinking Chained Heat meets Fury of the Wolfman.

Werewolf In A Girl’s Dormitory can be found on most of those budget-bin, public domain horror collection sets. It serves as a precursor to the more daring sexploitation flicks coming in later years. Too bad this puppy was neutered.